Spider-Man: Homecoming Review – The Most Fun Spider-Man Film So Far 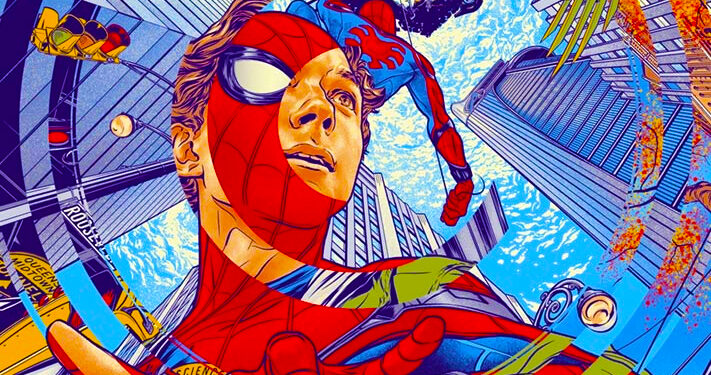 Spider-Man is back, and now he’s on the same page as the rest of the Marvel Cinematic Universe he’s got some real power. With great power comes great responsibility, and it’s his responsibility to not let the fans down this time. And he doesn’t! Spider-Man: Homecoming is easily the lightest, most entertaining and fun Spider-Man film of any of them. Full of heart and good humour, it’s formulaic enough to stick within the guidelines of the MCU while still bringing a creative breath of fresh air to it. It beats the rest by daring to try something a little different, and that’s one of the film’s true strengths.

The plot is relatively simple: Peter Parker, revelling in his almost-promotion to the Avengers, is tired of cooling his heels waiting to make it to the big leagues. Adrian Toomes, a hard-working construction boss who’s been screwed over by Damage Control taking his business, turns his hand to becoming an arms dealer whom fans will identify as The Vulture. Peter, as Spider-Man, tries to stop him.

That may sound by-the-numbers, but it’s all the twists and turns the plot takes which make the difference. Unlike previous films which have shown Peter as an angst-ridden loner science geek, this film updates things for the modern world. Peter has friends (Jacob Batalon as Ned, Peter’s best friend, steals almost every scene he’s in), a social life at school (albeit one he keeps putting off to be Spider-Man) and a potential love interest who likes him back. School bully Flash Thompson may still make fun of him, but it isn’t the old jock vs. nerd cliché, while Tom Holland is the Peter Parker fans have been waiting for all along.

Likewise, The Vulture isn’t your stereotypical villain. He may talk a big game, but deep down he’s just a family man who’s fallen on hard times and is trying to provide for his family, which puts him in a curious grey area. His criminal cohorts Shocker and the Tinkerer aren’t henchmen, but co-employees and co-workers. Michael Keaton once again delivers an outstanding performance and seems to be having some real fun in the role.

Beyond the characters, it’s an origin story that isn’t an origin story. Forget Uncle Ben, here it’s all about Spider-Man proving himself to Tony Stark. We know what Spidey can do, but here he’s still got the training wheels on regarding his abilities. We get to see him develop over time, knowing that he’s often biting off more than he can chew. Toss in plenty of in-jokes and cameos (the series of Captain America public service announcements are hilarious, and don’t forget to stay for the end credits), references to the films of John Hughes, and a soundtrack which Star-Lord would appreciate (including the classic theme tune), and you’ve got all the ingredients for a Spider-Man film which truly is amazing.

Spider-Man: Homecoming is pure entertainment from beginning to end. Whether you’re a long-time fan of the franchise or a newcomer to Spider-Man and his amazing friends, you won’t be disappointed.