Subtle and perfect for the whole family. Those are two things you’ll never associate with the South Park franchise – and thank Trey Parker and Matt Stone for this. The world is full of PC bros at the moment and it’s time to stop walking on eggshells and stomp on them instead. With the release of South Park: The Fractured But Whole, a lot of people are about to get offended – and it’ll be an absolutely hilarious thing to witness. Set after 2014’s The Stick of Truth, South Park: The Fractured But Whole is now about Cartman trying to set up his own superhero franchise with the $100 reward for finding a missing cat (“with great power comes great chicks and money”). You choose a customisable hero, with your own origin and difficulty level based on race (yip, the developers went there), and team up with the gang from South Park to venture into a Civil War-inspired storyline. The gags and dialogue are side-splittingly funny and up to the show’s incredibly high standard of comedy. Once again, if you’re easily offended, you’ll be laying a complaint within five minutes of playing the game, so consider this your final warning. In addition to this, if you’re a touchy fanboy about the superhero genre in general and cry when someone mocks your favourite character on Twitter, you’ll shed a few tears here since this game rips every trope to pieces.

In terms of gameplay mechanics, the turn-based action system and general RPG approach work well within the world of South Park. At times, it does feel a bit confusing to figure out which direction you need to go in, but to paraphrase the hilarious hint screen: if you’re struggling with the combat system, get better. Laying the smackdown on your opponent can also be done in several ways, such as farting in their general direction or utilising other outrageous attacks. If you’re smart, though, you’ll plan your tactics to ensure your attack sends an opponent right into another one, causing a domino effect and more damage in one turn.

The world itself is massive and there’s room for exploration and interaction with the responsive environment. Naturally, this comes with the typical South Park quirk and charm, so don’t be surprised if you see and experience something WTF every time you enter a room. Like on the show, nothing is sacred here. From the art to the voicework, the game is incredibly immersive and feels like an extra-long South Park episode. Right from the start, you feel like you’re one of the gang and a fundamental part of this insane world. In fact, you’ll struggle to go back to the mundane real life after a few hours of South Park: The Fractured But Whole. 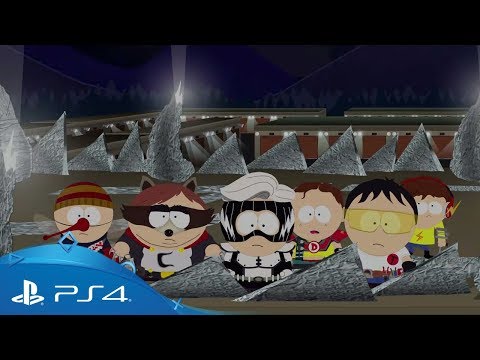