With April almost behind us, Sony PlayStation held a new State of Play event which, although short on announcements, did give us a brand new Ratchet & Clank trailer to gawk at. It is no surprise then that the majority of the event was devoted to Sony’s famous duo of heroes.

Here’s what was announced at Sony PlayStation State of Play April 2021:

With the release of Ratchet & Clank: Rift Appart just around the corner, Insomniac showed off some new footage of the upcoming game.

We get to see some of Ratchet’s new moves and the game’s combat mechanics. We also look at the Lombax’s increased mobility as Ratchet can chain together moves to quickly traverse the environment.

Of course, with Sony revealing Rivet, the game’s female Lombax, in the last trailer, Insomniac also showed off some gameplay featuring her working together with Clank.

The game looks gorgeous, thanks to the power of the console, and is set for release on the 11th of July, exclusively for the PS5.

We get to see the game in action and learn more about how the mechanics work.

Of course, the trailer shows how Below Zero will make use of all the PlayStation 5’s new features, including shiny visuals and haptic feedback from the DualSense controllers.

The game is set to release on the 14th of May.

🌟 AMONG US – COMING TO PLAYSTATION 🌟

get ready to welcome a whole new crew on board!!
✨ on PS4 and PS5 consoles later this year
✨ exclusive Ratchet & Clank skin, hat, and pet
✨ crossplay and online multiplayer

Lastly, Innersloth revealed that their popular multiplayer game, Among Us, which has taken the gaming world by storm, would be coming to the PlayStation 4 and 5 later this year.

No specific date was revealed, but we know that the game will cross-play. 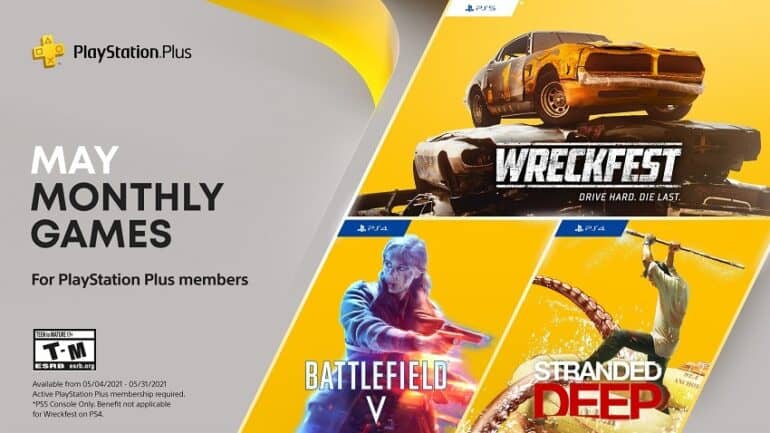 It’s a great time to be a PlayStation gamer. Along with all those cool announcements, Sony also revealed their PS Plus games for May 2021.

You should know how it works by now. If you have a valid PS Plus subscription, you’ll gain access to 3 or 4 free games each month (usually two PS4 games and one PS5 game).

This month’s games are Battlefield V and Stranded Deep for the PlayStation 4. And Wreckfest: Drive Hard, Die Last exclusively for PlayStation 5 owners.

Free games and cool announcements. What more could a gamer ask for?