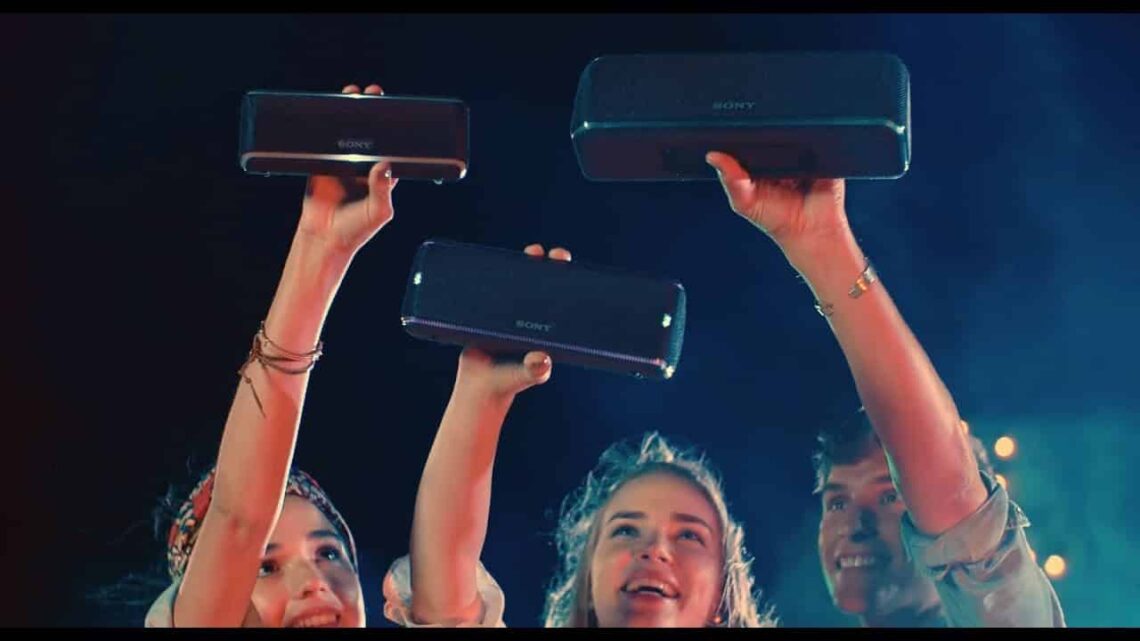 Over the years, I’ve reviewed my fair share of portable speakers – some tiny enough to fit in your pocket, with others large enough to provide sufficient audio at a party. There are a few key aspects to consider when designing the type of portable speaker you wish and the type of environment you prefer to have them used. I recently got my hands on the Sony SRS-XB21 portable speaker for review, classified as a party speaker. As a party centre-piece, the unit has a huge responsibility to provide sufficiently loud audio at good enough quality to keep a small room satisfied. There are countless other portable speakers for the form factor, so the pressure is definitely for Sony. Is the SRS-XB21 able to keep the party going?

The XB21 features a similar build and design as many other people Bluetooth speakers, most notably the Beats Pill. The unit has a modern and sleek look, which is rugged and lightweight enough to make it easy to use outdoors. The unit received for review is covered throughout in a mix of red materials. The red isn’t as bold and bright as many other Bluetooth speakers, but isn’t much of an issue all things considered. The unit has a predominately plastic build, from the grille to the accents and the likes. There is a slight difference in the various reds across the different types of plastic polymers. The XB21 range is also available in various other colours, including white, black, yellow and blue.

The unit includes two LED strips running across it at the top and bottom ends.

The unit includes two LED strips running across it at the top and bottom ends. The strips run across the entirety of the unit, from front to sides. As a default, the LED emits lighting based on the colour of the device, so in this case, they would have flashed red when powered on. The hardened plastic also provides a robust build for the XB21, making it drop proof. Sony claims the unit has a 516.5 Shock MIL-STD 810 F standard, which allows the unit to withstand a drop of over one metre. You will, however, pick up a few bumps and scratches for any said drop. In addition to this, the unit also has an IP67 rating, which gives the unit water and dust proof capabilities with a depth of 1m for 30 minutes.

The rounded build of the XB21 is a weird one. While it may look the part, it’s not overly practical. Sony added four feet to the corners of the bottom of the device, but any movement of the surface (such as bumping the table) would result in the unit falling over backwards to reveal its underside. This is mostly as a result of the tale end stretching out further than it should, creating an uneven weight balance. It’s not a world-ending flaw by any means, but something that should really be considered. 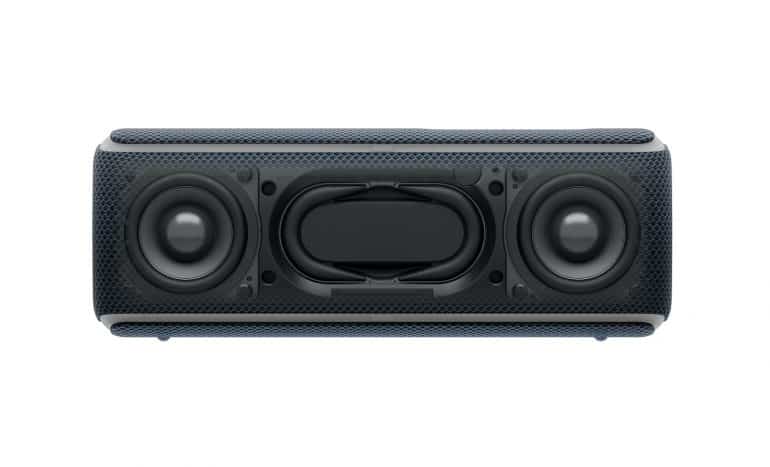 There are a few ways in which to setup the XB21, based on your preference. For most, I would assume is to simply power on the device, select the Bluetooth pairing option and then connect via your smartphone’s Bluetooth settings menu. Or even easier, simply tap the device using NFC to connect. It’s as simple as that. You can also connect to the unit via the auxiliary port included on the rear. However, you won’t get the most out of the device by simply connecting and let the music play.

To achieve maximum performance using the XB21, you are required to download the Sony | Music Centre app via the App Store for iOS and Play Store for Android.

To achieve maximum performance using the XB21, you are required to download the Sony | Music Centre app via the App Store for iOS and Play Store for Android. Once you have connected the device by means of the app, users can then change quite a number of settings on the device, from the sound equaliser, which includes a number of sound presets, to the LED effects to enhance those special occasions.

One of Sony’s most touted feature using the app is the “party booster” mode. Here, users can pick up their XB21 and start tapping to the beat on the device itself. Thanks to the built-in sensors, the unit tracks each tap to create a sound of your choosing, scratch, snare, kick drum or, the infamous, cowbell. The problem with the feature, however, is that there’s just enough lag to make it feel out of place and forced. No one likes someone standing next to you clapping out of beat to a song, which is why it’s very hard to like this feature until they improve the sync response.

There’s also Sony’s “Party Chain” mode, which allows a host of people to connect multiple Sony-supported speakers to the XB21 to create an elaborate circle of audio, all synced to a single source. There’s no shying away from the fact that these features are more of a gimmick than well-rounded features, as it didn’t enhance the sound quality or experience much. Also, the devices had to be in close proximity to one another and the XB21 for best results. 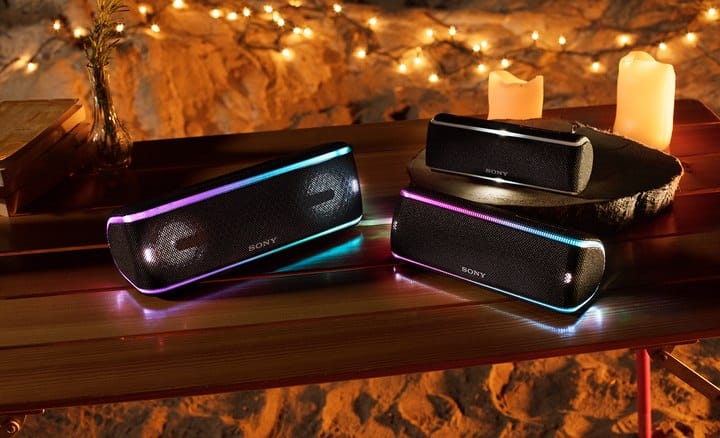 When it comes to the nitty-gritty, the XB21 delivers on its promises. It provides good quality audio with just as good volume levels. Sony has been known for many of the audio devices, ranging from speakers to headphones and everything in between. The XB21 is no different. One of the key performance areas of the speaker is its ability to provide deep bass for all types of audio. The speaker provides clear sound, even at higher volumes, with only one or two songs we slight issues with, given the type of composition. The unit has a dynamic range from highs to lows that you can really appreciate. For a speaker in its price range, the unit provided one of the best stereo audio performances, with volumes to match some of the more expensive units on the market.

One of the key performance areas of the speaker is its ability to provide deep bass for all types of audio.

As for the battery life, Sony has an indicated 12-hour lifespan between charges. During our testing, the results varied. For lower volumes, the unit can easily breeze passed the 12-hour mark. Not so when the volume is turned up, which has a significant impact on the results, sometimes as low as 7-8 hours. Still, these are above-average timeframes between charging.

The Sony SRS-XB21 isn’t going to stand out from the crowd with its design. Thankfully, it can do so with its audio setup. Despite a few of its wonky party features, which definitely have room for improvement, the speaker delivers a good overall performance, as you can have reasonable playback volumes that could last an entire workday. At a retail price of R1,999, the unit can keep the pace with some of the pricier models on the market. It won’t, however, be able to match the likes of units from Bose, Beats and B&O. The US price is set at $70, making it an entry-level device, but thanks to the exchange rates and import taxes, it crosses into the mid-range territory by the time it reaches our shelves.

The Sony SRS-XB21 isn't the most affordable portable speaker around, but you'll be hard-pressed to find any other units within the same price with same quality audio. 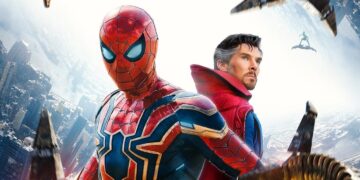