Ask just about any gamer, young or old, who Sonic The Hedgehog is and they’ll give you a good answer. Yet, despite the character’s popularity and a slew of successful marketing, which has seen the Speed Demon appear on everything from comic books to animated TV shows, Sonic Forces is proof that Sega has no idea what to do with their famous hedgehog. Even after the success of Sonic Mania, which saw a return to form for the franchise, here the Japanese video game developer heads off at full speed in the wrong direction, again. It’s 2017 and you’d think that Sonic would progress beyond just being a simple, shoddy running and jumping game, but it hasn’t. In fact, Sonic Forces unsteadily races from start to finish hopping on the heads of colourful mechanical toy robots like a game that’s meant for a smartphone rather than an eighth-generation console. The game’s best and most exciting moments are played out in bigger non-interactive cut scenes that are out of the control of the player. Perhaps this is because the primary audience for the game is really meant to be kids between 6 and 13. Anyone who doesn’t fit into that demographic will find the story, the game’s environments, its music and characters incredibly dull or, at least, more of the same. The only true variation here is that Sonic Forces occasionally transcends from 2.5D platformer to 3D platformer between levels. Ironically, the game starts off with Big Blue being defeated by Doctor Eggman, who manages to destroy huge parts of the cities. Players are tasked with creating their own custom-made character (known as the “new recruit”) and, together with the help of some of his friends, including Knuckles and Tails, must fight alongside Sonic to restore order to the planet again. This results in battles and clumsy races in space, lush green environments in Green Hill Zone and an alternate dimension.

Most of the game’s focus is centred around the customisable character you create (you pick the species, customise the look, and dress it up). And, because he isn’t the main hero and he is still overshadowed by Sonic, obviously, he/she isn’t equipped with speed as a superpower. Instead, your character is equipped with weapons, like flamethrowers, gravity guns and whips. As the game progresses you unlock more cosmetic changes for your hero, like sunglasses, gloves and fancy shoes. Even despite this, there is a sense that you’ve played all this before. The inconsistent level design, the cheesy 90s pop-rock soundtrack, the racing at high speeds through levels littered with enemies and rings and the clunky attacks, all feels a little too familiar. Not only that, but the levels also feel incredibly short. It’s possible to run at lightning speed through an entire stage without any skill or even doing much thinking. The most fun and rewarding parts of any level are the boss fights, which are actually surprisingly well thought out for a change. It’s the only part of the game that requires you to think beyond running and jumping.

In the end, Sonic Forces doesn’t capitalize on its potential and doesn’t steer away from the formula. You’ll find yourself skipping through the game’s story and rushing through levels to get to the end as quick as possible. That said, there is some fun to be had here and there. It’s just such a pity that it is few and far between. 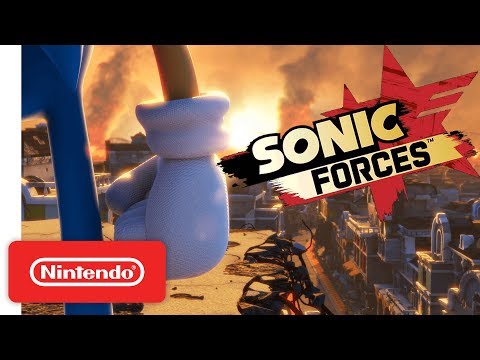