There have been rumours of a Willow sequel starring Warwick Davis since the release of the first film back in 1988 – that’s 32 years ago. Now, actor turned writer Jon Kasdan, who is currently penning the yet-untitled Indiana Jones project, has teased the new series.

“The office is open,” Kasdan tweets. Included is an image of a billboard with a caricature of our beloved Nelwyn dwarf.

According to rumours, the writer “kept hounding” Ron Howard, the director of the original film, about a possible Willow sequel during production and filming of Solo: A Star Wars Story. It seems his pestering worked.

The office is open. pic.twitter.com/wty5ENi3He

“We’re in discussions about developing a Willow television show for the Disney Plus,” Howard confirmed in 2018. “And I think it’d be a great way to go. In fact, George [Lucas] always talked about the possibility of a Willow series, and it’d be great and more intimate, and built around that character and some of the others.”

Throughout the years, in various interviews, Davis expressed interest in reprising his role as the titular character. If George Lucas is keen, Ron Howard is keen, Warwick Davis is keen and Kathleen Kennedy is keen, make it happen Disney! We’re ready for more enchanted tales from the aspiring sorcerer. 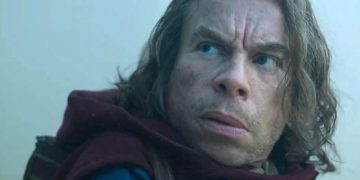