Siegecraft Commander Review – A New Look at an Aging Genre 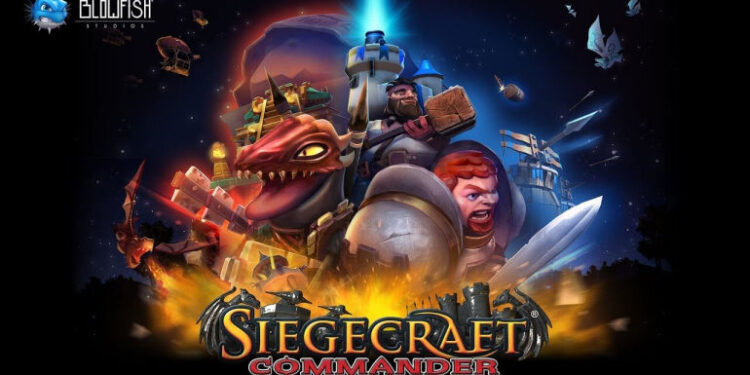 Although there are some great moments and uniqueness to Siegecraft Commander, it isn’t without a few weaknesses. But does the game have enough depth and staying power to compete against the more popular MOBA titles, especially for its multiplayer mode?

For those who enjoy the traditional Real-Time Strategy (RTS) games, you may be hard-pressed to find many new titles that are up to scratch, especially given the rise and rise of the MOBA genre with explosively popular games such as DotA 2 and League of Legends. One another front, Tower Defense titles have always had a tough time of it from an initial boom, to the mundane, repetitive nature that often plagues the genre. Safe to say the even with some early success, a Tower Defense game may not live to see it through a complete year at the top. Oddly enough, Blowfish Studios has released a title that sees it compete within both genres (RTS and Tower Defense) with a unique take on both the MOBA and tower defense genres. Siegecraft Commander takes a humorous approach, possibly creating a new genre within its own right. Although, at its core, Siegecraft Commander is a Tower Defense game, the unique gameplay makes it feel quite a lot different. Instead of simply placing the optimum points as to where you want your towers, players have to ‘throw’ the towers to the desired location, creating a chain effect. Each tower is linked to a pre-existing tower, and destroying the link could result in the whole chain collapsing to that point. This makes it a lot harder to plan the layout of your tower chains in order to stop the enemy from simply destroying the link further down the line and ultimately removing any advances you may have made.

At the start of the game, there are five basic towers to through: Armory, Ballista, Garrison, Library, and the most important, Outpost. The Outposts are able to spawn each of the mentioned towers, whereas any of the others break away into sets of their own. For example, the Garrison has the option to build a Barracks, which spawns your own set of AI-controlled, melee troops to attack the enemy from the ground. Choosing which tower you should spawn depends on the enemy setup in each of the zones. While you’re no doubt able to attack and destroy the enemy base simply by building Outposts and firing TNT from the towers, it is quite inefficient and prone to melee attacks on a regular basis. At some stage in the game, players can fire additional explosives, which includes Boombahs, and even the odd cow.

While resources aren’t overly critical in the game, they are available. Resources such as Crystals and Gold allow to you throw a set of towers that may not be available without it. It does, however, work very different from what you’d expect. Instead of mining the resources, you’ll throw one of the base buildings (most often the Library) onto the resource patch, and from there, depending on which resource is available, you’re able to throw a tower making use of that resource. This also creates some form of tech tree, which provides the layout for which towers are needed to certain weapons. In all honesty, you can avoid this during the campaign modes, as it’s never too complicated to bother. The single player campaign sees Siegecraft split into two story modes, the first focusing on the Knights of Freemoi in “Voyage For Glory” and the second revolving around lizard people’s defense against the rogue Huntrad Clan in “Crusage of Hope”. Both storylines aren’t complicated at all, to say the least, but finds some saving grace in the form in which it is told: a page by page storybook mode. Despite the manner in which the story is told throughout the campaigns, you can’t help but feel the presentation is a bit too basic, with a clear lack of visual stimulation page after page.

Bringing Back the LAN Party

In its multiplayer mode, Siegecraft Commander provides two variants of gameplay, along with two variants of multiplayer connectivity. Players can choose to battle each other over the local network as you would in days gone by. They’re also given the option to choose between the standard RTS mode, or turn base matches. Each of the four modes provide a slightly unique experience, although I would safely say it’s best to avoid the turn base mode at all costs.

Siegecraft Commander is a port from the mobile game, and is available on PC, Xbox and PlayStation. That said, there are a lot of bugs as a result. I switched to using the Xbox controller to test the game dynamic and controls, and if you already had a few annoyances when playing with the standard mouse and keyboard setup, you may have a day of ‘fun’ with a controller. Speaking of bugs, there are many. Playing locally has the most bugs, with simple dynamics such as the opposition player being able to control the camera view during your turn. Why?

The multiplayer RTS mode is the most fun, and provides a challenge over the single player story modes. That campaign took less than two hours to complete, which eventually became repetitive. As with many games, multiplayer modes offer the best experience for Siegecraft Commander.

You’ve Docked in the Wrong Port

As I mentioned before, Siegecraft Commander is based on a port from a mobile game for Android and iOS. This is clearly evident from the somewhat blocky and unrefined graphics at times. The port also leads to a number of issues with the controls, often throwing your towers to some random location you did not aim at.

For some versions of the game, there is a VR tie-in as well. Although I wasn’t able to test this out myself, I can imagine there may be a few great nuances to the gaming, coupled with even more bugs on the PC port.

For some strange reason, there is one aspect of the game I didn’t feel at ease with. After having crash landed on the alien planet, the group of Knights take it upon themselves to destroy the “savages”, etc. Coupled with the thick British accents for some of the Knights, I can’t help but relate that to some of how the British may have set about conquering the world. The Medieval setting may be fun for the storyline, but doesn’t help the cause in this case. It isn’t a blatant addition to the game to mimic what would be in really poor taste, but I would have suggested a slightly different approach to the storyline in retrospect. At the End of the Day

As with many Tower Defense titles, Siegecraft Commander loses interest very quickly when playing through the campaigns. Knights of Freemoi’s campaign is a slow burner, and while it may take some time to get interesting, reaching that point may have already lost one or two players. The Lizardmen campaign is a lot more engaging, although it too wouldn’t be sufficient as a complete title. Switching to the multiplayer mode, more specifically that of the RTS mode, brings a lot more fast paced action and great fun. I would see the campaign modes as something of a tutorial, and given the less than two-hour completion, it definitely feels that way.

Having only recently been released, there may still be a long way and numerous patches ahead for the development team, especially considering the amount of gameplay bugs lurking about. With the campaign also in serious need of a rethink, given its repetitive nature, it may be better to shorten it even further and write it off simply as a tutorial on the dynamics for both races and exploring the different tower options. This will then be followed by a more competitive game in multiplayer mode.

I enjoyed many moments during Siegecraft Commander, but it lacks a sense of completeness to compete against more notable games. I could recommend this as a unique approach to both RTS and Tower Defense games, and it may just keep you entertained long enough to pass the time while waiting for Halo Wars 2 to release next month.