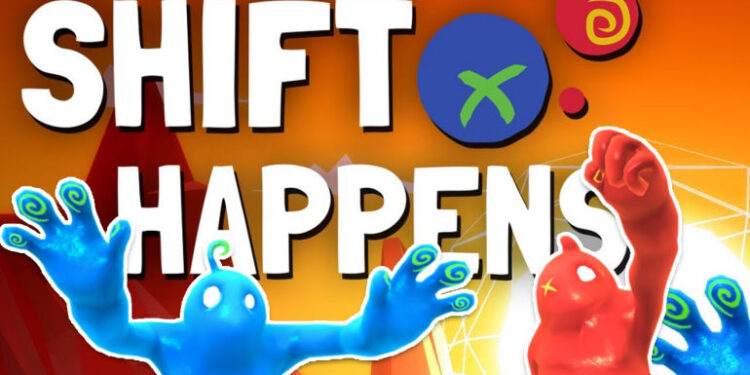 If I think back to my early gaming days, which started off way back in the 80s, many of the games I played with my brothers and friends from the neighbourhood were co-op, now referred to as “couch co-op”. What was once a staple of the gaming industry has now been shifted and co-op gaming is only kept alive by indie developers. Klonk Games, with their first title, Shift Happens, seek to continue the trend of great couch co-ops. Shift Happens is a bit of a wacky platformer game. It takes place in a number of different surroundings with many more elements and gameplay mechanics scattered throughout. Players start off in what seems to be a crossover factory/lab environment, where the company seemingly creates blob-like creatures which are able to change their shape and size from large to small, tall to short, fat or strong.

After an accident at the labs causes paint to mix in with two of the creatures, we get the birth of the orange goo, Bizmo, and blue goo, Plom. The two creatures somehow develop personalities of their own and quickly begin to explore the labs with some mischievous activities, which eventually leads to yet another accident, causing the two be linked to one another. This means that while they still have their ability to shape shift, the resulting change causes the other to the opposite, one grows larger, while the other smaller. After the quick introduction, players take control of the duo in an attempt to escape from the labs, which sees them encounter many different environments including a mysterious forest, canyon and icy cave. As you progress through each of the different stages and worlds, you learn new mechanics. As a large blob, Bizmo and Plom are stronger, able to pick up and throw obstacles, including their partner, and create more force on pressure plates. In contrast, when small, they’re now much faster, jump higher and further. The size of the two also determines how they interact with their surroundings, such as walking through deep water when taller or fit into narrower gaps when smaller. Either way, the two have to work together to solve puzzles, which present themselves as obstacles in their way of escaping each world/environment they’re in.

Along the way, players collect coins scattered throughout each stage, with a maximum of 75 to collect. The first 55 coins are relatively straight forward to collect as they appear on screen as you traverse the map. The final 20, however, are hidden and require a keen eye or additional exploration to find. There are no real benefits to collecting maximum coins, but for those who make a habit of reaching 100% game completion, it may be of worth to you.

The controls are pretty straightforward and players are able to pick up and play without too much introduction. That said, when the mechanics and challenges move up to the next level, a brief tutorial is presented to highlight new, or previously unused capabilities. Players can run, walk, and jump through each level, with the ability to pick up, push, pull and throw different obstacles onscreen. As mentioned numerous times, the game features three game modes in the form of single player, multiplayer co-op, and couch co-op. The experiences differ quite significantly from each of the game modes chosen. Single player allows you to control both Bizmo and Plom, switching between each to move through certain obstacles and complete the level.

The game’s biggest drawcard is the co-op capabilities, whether it’s being online multiplayer or with a friend. The biggest difference between the two is that the couch co-op makes for great entertainment and rivalry between the two players, providing a number of laughs and even a few shoulder nudges whenever your teammate deliberately sabotages your actions. The same cannot be said for online multiplayer, as there’s more of an aim to complete a stage than having a few laughs, which often becomes frustrating when your partner isn’t up to your same level of puzzle solving. A few years ago, Rock Pocket Games released a game called Shiftlings, which also featured a shape-shifting duo in similarly designed obstacles, albeit a completely different background. Shift Happens shares a similarity that’s very notable. While it does provide a different type of storyline, a few different elements and environmental interactions, you can’t shake the feeling of déjà vu.

I enjoyed Shift Happens and enjoyed how it played in both single player and co-op modes. Whether you’re playing quietly in single player mode, shouting and laughing with a friend, or shouting in frustration at a stranger, you’re bound to find something to enjoy with Shift Happens.