Sheriff of Nottingham Board Game Review You are standing at the border, nervously fidgeting with your bag of goods. The thought of the sheriff inspecting your goods keep running through your mind. A bead of sweat collects on your brow as the sheriff asks to inspect them. What would you do? Would you tell the truth, lie or even bribe him. Figuring out the answer to this question is what makes the Sheriff of Nottingham such a fun game.

The premise of Sheriff of Nottingham

Sheriff of Nottingham places you in the shoes of one of five merchants, each trying to transport their goods (legal and illegal) across the border safely. The catch? Each player gets to be the sheriff. It is the sheriff’s job to decide who may pass with their goods and whose goods need to be inspected.

The components are a bit of a mixed bag. For starters, the artwork on the cards and player boards are great and sucks you into the Sheriff of Nottingham theme. There were many times when we would catch ourselves creating backstories and accents for our chosen characters. The cheese merchant always seemed to have the funniest back story and accent, no matter who played the character. The cardboard used for the coins and the player boards are nice and thick, and felt good to handle. The bags that you place your goods in are made of a nice soft material.

I did have a problem with the clasps on the bags themselves. Hearing the click when you open them somehow adds a lot to the theme. It would have been nice if the clasps were a better quality as I had to force open some of them and almost broke one clasp off.

The card stock is a bit flimsy, especially considering that you have to shuffle a lot of cards. The deck consists of 216 cards. The problem with this is that for the game to play at its best, the deck needs to be shuffled thoroughly. With so many cards to shuffle it tends to take a while. 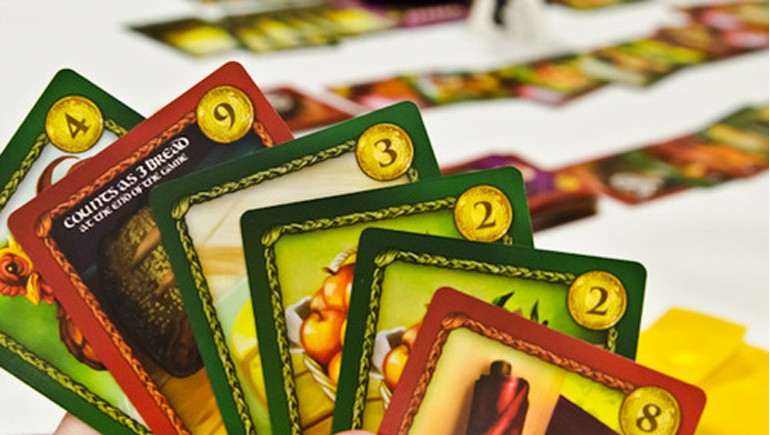 The gameplay in Sheriff of Nottingham

The game starts with each player choosing a character and receiving the matching player board and goods bag. The players are then dealt a hand of six cards and also their starting gold.

One player is then designated as the sheriff for that round.

In a round each player (excluding the player who is the sheriff) can discard any number of cards from their hand. They then draw the same number of cards that they discarded from the draw and discard piles.

After each player has discarded and drawn their cards, they then place any number of goods (not more than five) of any type into their goods bag and close it. The bags are then handed to the sheriff, and the contents are declared.

Now, this is where the fun starts. Each merchant can make any declaration they wish. They must however declare the correct number of cards in the goods bag, and can only declare one kind of legal goods (even though that might not be what is in the bag).

The merchants and sheriff are able to negotiate bribes so that for instance, the sheriff inspects another merchant’s bag and not yours. These bribes can range from gold, goods to favours. This back and forth negotiating is where the fun lies in Sheriff of Nottingham. More than once the negotiation phases lead to funny accents and bursts of laughter between the players.

After the bribes have been negotiated the sheriff then inspects the bags that he has chosen and the relevant fines are paid.

At the end of the game, each merchant adds up the number of points allocated by the goods cards and any bonus points received. The player with the most points wins.

I must also mention that there is a free app for the game that does the point calculations and that keeps time of the negotiation phase. I would highly recommend the app as it not only makes calculating the points a lot easier, but it also adds to the theme by having ambient noises playing while the app is running. 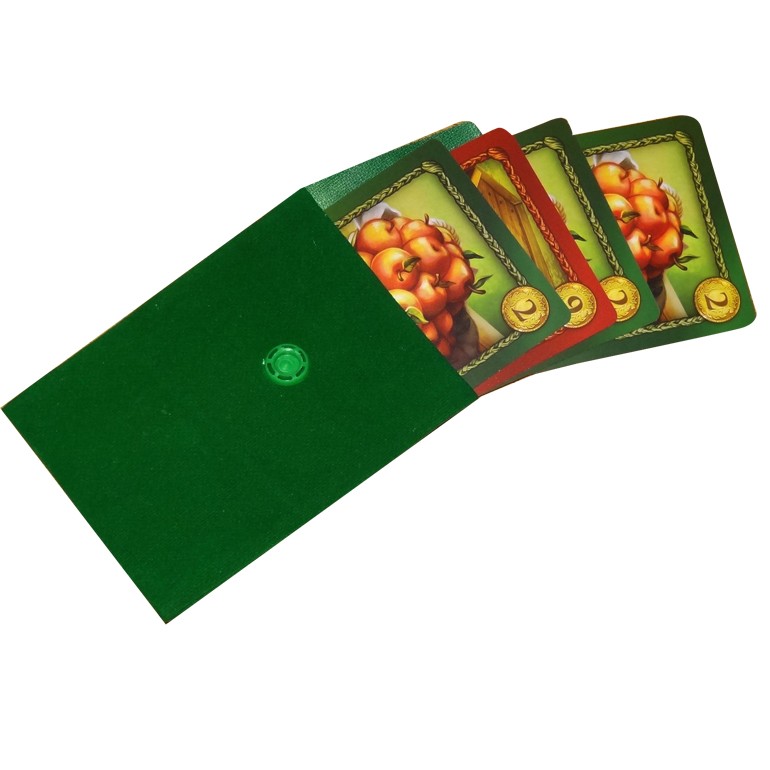 One important point to mention is that I found my enjoyment of the game directly correlating to the type of people I played with. If the group that you play with doesn’t like negotiating and isn’t interested in trying to maximise their points by sneaking through illegal goods every now and then, the game tends to become very boring.

The theme of the game really shines through. From the click of the bags to the artwork each part of the game draws you into the theme. Keeping this in mind, I can not encourage anyone who buys the game enough, to download the free companion app. The ambient sounds played by it while the timer runs truly adds to the experience.

I was a bit disappointed with some of the component quality. The negotiation phase when not being timed could also drag a bit, luckily the timer on the app helps prevent this.

Sheriff of Nottingham has gone from a game that I didn’t know much about to one of my favourite games of all time. This is not just because it looks great and plays well. It is because of the hilarious and unforgettable moments one can have when playing with the right group of friends.

I really enjoyed Sheriff of Nottingham and would recommend that fans of both party and bluffing games give it a try. Gameplay: 9/10 The game was easy to teach even to first-time board gamers. The game is great fun as long as you play with the right group of players.

Complexity vs. Depth : 3.5/5 The game is easy to grasp and is a great lightweight bluffing/party game.

Theme : 5/5 From the great looking player boards, to the goods bags and even the app, the game does everything right to draw you into the theme from the start.

Overall : 4.5/5 Sheriff of Nottingham is one of my all-time favourite light bluffing/party games. I enjoyed every game I played and was never bored. I did have some issues with the component quality but, all in all, that never overshadowed the fun we had.

Sheriff of Nottingham board game supplied by Timeless Board Games (www.timelessboardgames.co.za)