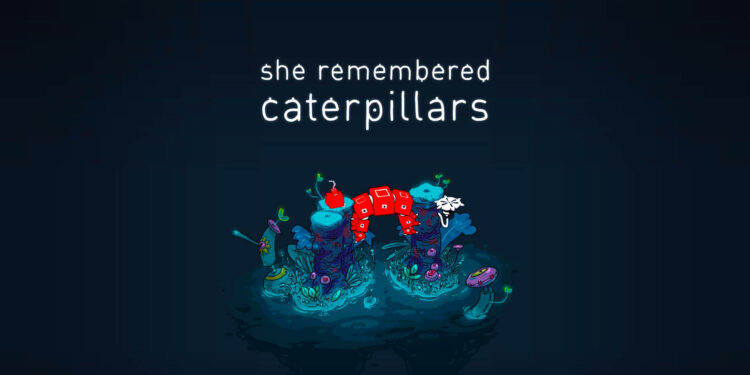 A few months ago, jumpsuit entertainment UG released a rather peculiar indie game on PC, She Remembered Caterpillars. No caterpillars are involved in the game, nor hurt during the making of the game (I assume). Instead, it is a puzzle game which tests your problem-solving skills from the point of view of fungi.

In terms of the dynamic of the game, the official synopsis reads as follows:

“A fungipunk fantasy about love, loss, and holding on, told in the format of a color-based puzzle game. A tale of the bond between parent and child, this lush and bewildering title will have players testing their wits against a variety of challenges, all beautiful and very strange.” On the most basic level, you control different coloured sprites (based on the three primary colours – red, yellow and blue) and direct them to move around on a tiny island made up of different bridges and gateways. Your aim is to set each of the sprites on the screen on a type of ‘mushroom,’ which then completes the level as the sprites develop propellers and fly off. Although my description here does seem a bit abstract, it’s fairly straightforward once you play the game.

On a more complicated note, each coloured sprite is able to cross a bridge of the same colour, but all other colours are able to pass through the gateways except the corresponding colours. To make things a tad more complicated, the sprites can be combined to form new colours – red and blue produce purple, red and yellow make orange, blue and yellow make green, etc. As you progress, the levels become increasingly challenging, as you’ll have to mix and match the different colours to follow certain paths as you attempt to set each sprite onto the ‘mushroom’.

On a side note, although the majority of this game is based on matching colours and following paths by means of those colours, She Remembered Caterpillars is also aimed at colour blind gamers. You’ll notice that each of the colours have an associated shape to them, with blue being the circle and red the square, for example. This is quite an impressive addition to the game, which I can appreciate, and I’m sure a few visual impaired people can too. From the shapes, the sprites, to the environments and background music, the overall feeling of She Remembered Caterpillars is very calming. The friendly feel of the game is extended by means of the animations scattered throughout, from how each of the sprites behave, them combining and splitting, as well as the interaction of the bridges and gateways as it stops you from being able to pass. The nature of the surroundings is in contrast to some of the frustration that may build up as you attempt to solve each puzzle, often times complicating matters to the point where only a reset of that particular level is an option going forward.

Apart from simply being a ‘simple’ problem-solving game, She Remembered Caterpillars has an underlying story in the form of silent narration told from the perspective of a few characters. Before each of the new levels, the chat unfolds between two characters at a time, at certain points as a father would speak to his son, and on other occasions between friends and other loved ones. I cannot tell if all the characters are the same for each new world, but the tone is quite different for each. There are a few topics covered, as stated in the synopsis, such as love and loss, which you can actually feel some connection to. This narration will possibly carry different meaning and depths to each individual playing it, as we don’t all have the same experiences and relation to it. Where the background story lost me, however, is that it feels separate to the puzzling. The only relation is that they’re both artsy and strike similar tones, but that’s stretching it quite a bit. Still, it isn’t a total waste, and I do believe that the actual game is a side note to telling these stories and providing a brief escape as you uncover what it means to you. Reading through some of the details about the game’s development process on the official website, you’ll come across the change in the actual story of the game, with the introduction of a new writer. Switching from a story on Isis and Osiris, as was originally planned, to something more along the lines of real world emotions and experiences shortly after her dad passed, brings a lot more reality to it.

I’m very much at home when it comes to problem-solving and puzzle games, and I felt at ease for the most part as I played through each of the levels. As with each individual who achieves a sense of calm and joy in their own ways, such games provide small achievements through each level. I really enjoyed She Remembered Caterpillars as a standalone away from the story. The story itself could feature as a standalone too and, in the end, also played out quite well, both alone and coupled inside the game.

She Remembered Caterpillars is available on Steam Store and Itch.io.