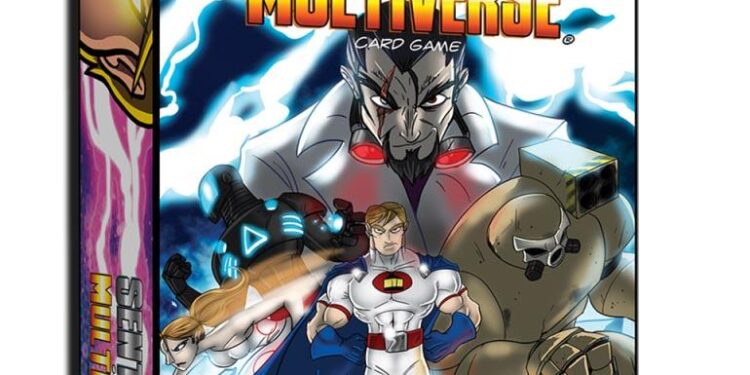 When I was a kid I remember daydreaming about superheroes, reading comics and imagining my little brother as an evil villain I had to defeat. Even though I am now all grown up (although, my wife tends to dispute this), I still turn into a little kid every time a new superhero movie or game gets released. When I opened the box for Sentinels of the Multiverse, I was expecting to find knock off B-grade heroes and a game lacking any theme. I was quite pleasantly surprised with what I discovered. Sentinels of the Multiverse task you and your fellow players with putting together a group of heroes (each with their own unique abilities and play style) in order to defeat one of the game’s villains. This task isn’t as easy as it sounds, as a myriad of henchmen and environmental disasters can interfere, making it more difficult for you and your fellow heroes to succeed.

One thing that caught me off guard when I opened the box was the amount of different tokens inside (a total of 162); these indicate the amount of damage that your heroes or the villain has taken, as well as status, effects that can occur throughout the game. The tokens are made of a really good thick quality cardboard stock.

The core of the game though is its cards (being a card game and all). There are 10 hero characters each with their own deck of abilities and equipment, 8 villains each with their own devious deck and 4 environment decks. These cards have some great looking comic book art that really adds to the theme. The card quality is adequate, although a better quality card stock would have been nice. Sleeving the cards would solve the problem and keep them from picking up too much damage.

I was very happy to see that the box contained extra empty spaces for the inevitable expansions that will follow.

I should mention that the game really drives home the comic book theme. The art, colours used, font and even rulebook looks like it came straight from the pages of an old school Marvel or DC comic book.

Each player gets to choose one of the 10 available heroes, each with their own unique abilities, equipment and play style. Some of these heroes are easier to grasp than others, luckily the rule book has a page indicating what level of difficulty (1-3) each hero rates. Not only is it important to note the difficulty level of each hero, but players should also keep in mind that each hero plays differently. Two of my favourite heroes in the game are Bunker (basically and Iron Man rip off) and Tachyon (a lady Flash). Although I like both heroes each playstyle differs vastly, for instance, Bunker relies on equipping powerful cards to deal huge amounts of damage, while Tachyon needs time to discard cards which she can later use to deal damage.

After each player has selected a hero, the villain is then chosen. Again as with the heroes each villain is rated on difficulty (1-4). Villains range from a sentient robot to an evil baron out to destroy the world.

Lastly players decide on the environment that the battle will take place in. Each environment has their own deck of effects and events.

The game takes place over several turns until all the heroes or the villain is killed.

This continues until the heroes defeat the villain or they all died trying. Sentinels of the Multiverse is a really fun superhero card game. From the obviously DC and Marvel inspired heroes, to the villains that wouldn’t seem out of place in a Power Rangers episode, the game revels in its cheesiness.

The theme is also incorporated into every aspect of the game, not only does the artwork look like it jumped straight out of the pages of a comic book, but the rulebook even includes a short back-story for each hero.

As far as the gameplay goes, the game is quite easy to grasp, and can be taught in a relative short time.

What is really apparent when playing the game is that the only way to beat the villains is for the heroes to work together, try and go it alone without your fellow heroes backing you and the team will fail (as I learned on many occasions). An interesting mechanic in the game is that when a hero dies their character card flips over; they then gain a set of lesser abilities. This makes sure that even though you might have been killed off you could still contribute (although in a much smaller way). This solves the problem of player elimination, especially since a game of Sentinels of the Multiverse can go on for quite a while.

One of the biggest problems I have with the game is the fact that there is so much to keep track of. Between the damage tokens, the effect tokens and each card ability it is quite possible (as we did) to forget about some of these. There were times where our games descended into chaos as effects (especially the villain ones) snowballed quickly making it hard to remember all of them. Now I must mention that there is a third-party app available on the Apple App store that can keep track off all these modifiers, which I would suggest owners of the game give a try as it just simplifies everything.

I should also mention that even though the game plays 2-5 players, I found the sweet spot to be 3. When playing more than 3 the game bogged down a bit, as turns tended to take longer. I would also advise against playing 2 players as beating even the easiest of villains can be quite a difficult task, and attempting this with the wrong combination of heroes can make it almost impossible.

I did enjoy playing Sentinels of the Multiverse. It is one of those games where the more you play the game, the more you seem to enjoy it. This has a lot to do with finding a hero that compliments your playstyle and figuring out how deal damage as efficiently as possible. It is one of the few games that made me feel like a hero, battling the odds to defeat an almost unbeatable villain. Gameplay: 8/10 The game is very easy to teach and quick to play, and makes you feel like a superhero saving the world.

Components: 3/5 Although the art on the components looks really great, I did find the quality of the cards lacking a bit. I do appreciate that the box has empty spaces for the expansions to fit into.

Complexity vs. Depth: 3/5 The game is not that complex to learn. However keeping track of the various tokens and effects does complicate the game unnecessarily, taking away some of the enjoyment.

Theme: 4.5/5 The theme permeates every aspect of the game, from the art to the rulebook, the game really feels like taking part in a comic book battle.

Overall: 3.5/5 Although I really liked playing Sentinels of the Multiverse, keeping track of every aspect of gameplay tended to take away some of the enjoyment of the game. If you are willing to accept that there will be times that the game can descend into chaos, and you are looking for a good superhero card game -one that makes you feel the part- then give the game a try.