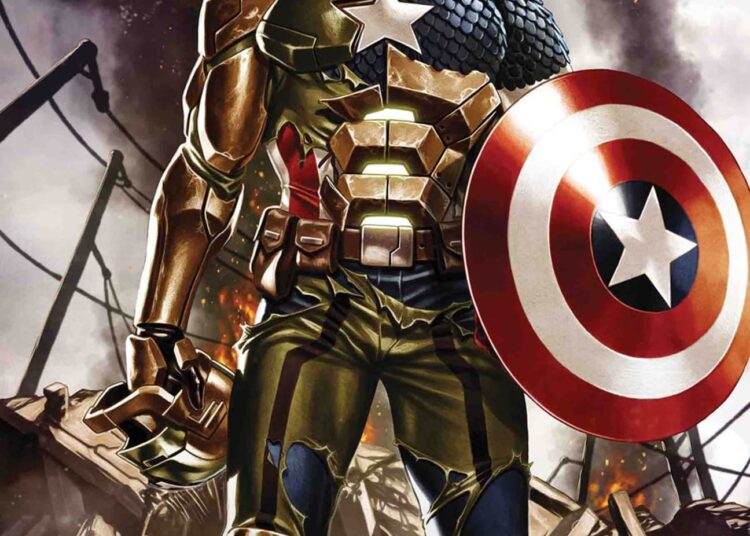 It’s arguable that Secret Empire has been going on for far longer than it needed to, and there have been many who have expressed frustration that yet another issue – Omega – seems like it’s all being dragged out even longer. While the complaints are understandable, that doesn’t diminish the importance of this issue as a prologue. There’s a great deal of fallout to deal with in the Marvel U, and the real lessons behind this storyline shouldn’t be ignored.

Hydra’s Secret Empire has been destroyed, and the Cosmic Cube has restored some semblance of normality to the world. Hydra’s supreme leader, the warped mirror-image version of Captain America, is now being held prisoner by the authorities and is awaiting trial. Yet Steve Rogers, the real Captain America whose life had been stolen, is desperate to talk with his evil doppelganger. As they debate the nature of their beliefs and what the Secret Empire has meant for the United States of America, the funeral of Natasha Romanov – the Black Widow – is held. Yet the Winter Soldier believes that all is not as it seems, and the Punisher sets about on his new mission to make up for his recent actions… Arguably the smartest thing that this issue does is to have both Captain America’s debate the main issues at hand since they’re equal in all ways except for their ideologies. Hydra’s Captain isn’t an insane villain or a madman out to conquer the world; he’s every bit as lucid, intelligent and strategic in thought as our heroic Captain America, and that makes him all the more disturbing. His understanding of the nature of the world and people is terrifying because it’s accurate. Or is it?

Representing the forces of hope is the base that the real Captain America operates from, and it’s that hope and goodness which shines through. It isn’t naïve optimism, and while public confidence in him is at an all-time low, Cap’s argument is that people followed Hydra not because they believe in fascism, but because they believed in Hydra’s leader who had stolen his identity and the public trust’s trust in him. The other storylines touched upon in this issue reflect the personal losses all of the heroes have suffered, with an eye to how history will view them. Some try to make amends, while others prepare to be forgotten. However, the most chilling image is a stark reminder at the end that even in a world rewritten by the Cosmic Cube, we need to be mindful because fascism can exist anywhere and take any form. Much as the Secret Empire storyline set out to warn us of that, it ends on a similar note.

It’s a political, sociological and philosophical debate, grim and humourless, and offers almost no action. Because of all those factors, it’s certainly not for everyone. It isn’t fun at all. But with intelligent writing that has something serious to say, paired with impressive, striking artistic visuals, Secret Empire: Omega #1 is one of the smartest comic books you’ll find on the shelves and is highly recommended.