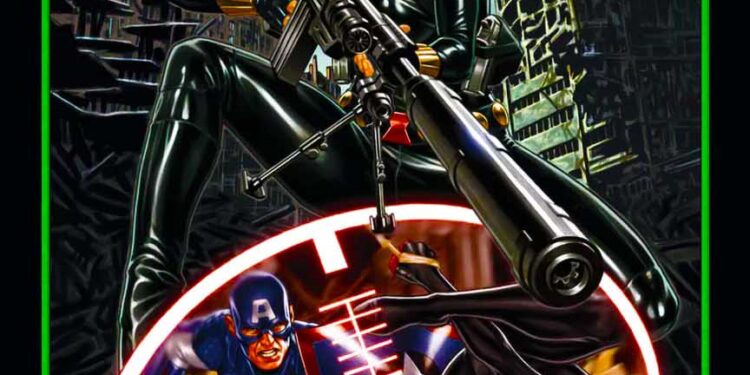 Secret Empire #7 is bound to create some controversy and make some waves. It’s hardly surprising because there are some big moments which happen. Once again the body count continues to rise and, at this stage, it’s questionable just who’s going to survive this and who won’t. The only thing made clear is that it’s going to be impossible to predict because there are so many different ways this could all play out. Captain America’s warped dream of a peaceful Hydra-ruled society is falling apart after Madame Hydra’s death. Just outside of Earth’s defensive shield, the trapped Captain Marvel and Alpha Flight weigh up their options and debate about escaping to an alternate universe. Meanwhile, back in Washington DC, Black Widow’s plan to assassinate Captain America continues to move ahead with a new soldier joining the ranks of her team.

However, the vision everyone had of Miles Morales – Spider-Man – killing Captain America clouds everyone’s judgments. As Hydra introduces online censorship and plans to make a forceful statement about their leadership, Black Widow must confront The Punisher as well as destiny itself…

On the down side, the handling of the “vision” of Spider-Man killing Captain America feels a little clumsy. That particular aspect of the story feels almost forced and slightly unfocused. It plays around with fate enough to set things up, but then purposefully goes against it in one of the most questionable moments of the series. Still, it’s good seeing the Punisher go one-on-one with Black Widow… although there are better moments in this issue. The internet censorship brought up hits home given recent announcements from various countries regarding the cracking down on freedom of speech – another reminder of just how fascism works. The (presumably) Ultimate Captain America storyline continues well, and the reminder that Captain Marvel and Alpha Flight can simply skip realities and go somewhere better is a rather sneaky tease. But once again the concept of hope is pivotal here.

With so many Marvel readers complaining about the direction of the MCU, it’s easy to say that everything should be scrapped and they should just start over. Between dimension-hopping and the Cosmic Cube, it’s easy to do a cosmic reboot if Marvel wants to, in a Rick & Morty way – although fans of that show will know that it’s a patch, not an actual solution. So… what if the current MCU world is really worth saving and fixing? Captain Marvel seems to think it is, and it’s an intriguing thought.

This series has become one that readers either love or hate. If you’re loving it so far, then you’ll love Secret Empire #7. If you hate it, then this won’t do anything to change your mind. Take from that what you want.