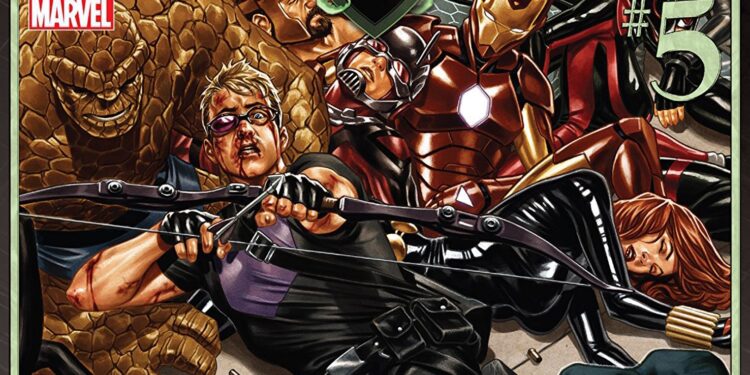 After both Hydra and the Underground resistance received a strong talking-to by Ultron/Henry Pym in their race to locate the fragments of the Cosmic Cube, events have started to spiral out of control. In Secret Empire #5, Black Widow makes a dangerous gamble against Viper, while the Underground’s hunt for more fragments has become nothing but a series of dead ends. But a traitor in their midst is finally revealed, while Steve Rogers is about to bring a new soldier in to the war…

Sorry about that. Pardon me. Professionalism is being restored even as we speak. It’s just… it’s the freaking Hulk! Well, Bruce Banner anyway, and that makes this is a real game-changing moment. Secret Empire, it’s fair to say, hasn’t been anything like anybody expected. Remember the outrage at first? Some morons boasted about burning their comic books in protest, since obviously book-burning is as far from Nazism as you could get. Some complained that Marvel Comics writers and artists had become a bunch of skinheads, until people got their own heads out of their backsides and realized that it was exactly the opposite, and the comics were warning us about fascism, not promoting it.

But still, everyone complained about Captain America becoming Hydra… and that’s fair, although it isn’t like they haven’t pulled similar tricks like this before in comics. Now we’ve all accepted that this is some stinking Hydra plot with the Cosmic Cube. Secret Empire, despite all the initial complaints, has been critically and commercially successful, and readers have (mostly) enjoyed it.

Then things got weird. The story started to go in directions nobody ever imagined, offering moments like Namor buckling like a belt and Ultron/Pym giving both sides in the war a good spanking and a stern lecture. Plus there’s that guy wandering around who sure seems to be Ultimate Steve Rogers. Now the story takes another curious turn. Several key set-pieces are teased here, especially the ones which readers have been the most curious about. Like, what’s the deal with Scarlet Witch, the Vision and Quicksilver now? What happened to that moment that fans went mental over, when an evil Captain America seemed to lift Mjolnir? Why is the Odinson hanging out with Hydra and being a jerk?

Now that Banner is back, it looks like only a matter of time before things get set right, because Hydra-Cap is sowing the seeds of his own destruction.

Strangely though, for all the twists and turns, this issue isn’t quite satisfying. It does a great job of setting things up, but it’s mostly sizzle and no steak. The sizzle is great, don’t get me wrong, and the writing on it is very good… but it needed just a little extra oomph. However, It’s another solid (and vital) issue.

Secret Empire #5 may not quite hold up to the rest of the series so far. But you just know that things are coming to a head. Now, if you’ll excuse me, I need to Hulk out…