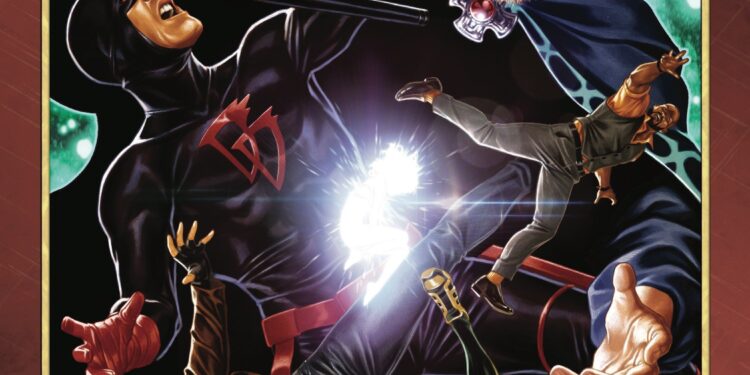 Secret Empire has been full of shocking moments, and Secret Empire #2 may contain the most incredible one yet. The big reveal in this issue is truly astonishing and could turn this entire series on its head, and it’s only through a huge effort of self-restraint that we’re not giving you the spoiler of who it is. But it’s well worth reading to find out! Rick Jones is dead. Las Vegas has been levelled. New York is trapped in darkness. While Hydra controls the fate of the world, the few remaining free superheroes of the resistance struggle to cope. Saving the lives of innocent civilians is their prerogative, but the deeper problem remains and they debate how best to deal with the traitor they once knew as Captain America. Captain America, meanwhile, consolidates his position of leadership within Hydra.

In New York, the Defenders and Cloak and Dagger work tirelessly to provide hope for the masses, and the Kingpin works to stop those who prey on the weak. Beyond New York though, the information provided by Rick Jones before he was killed could prove pivotal, but it divides the resistance between two plans: rescue Captain America or kill him. However, the return of an old hero will make everyone question the world they’re now living in…

Just about every major player in the Marvel Universe is given a chance to shine in Secret Empire #2, with each one acting or reacting in a way which is incredibly genuine. The Kingpin’s scene is a real standout, once again proving that he’s a true protector of New York… in his own way. Meanwhile, the oft-forgotten Rick Jones once again shows why he was important over the years because he reaffirms what superheroes should stand for.

It’s all about hope. The grim, dark nature of the story is obvious, but it’s here that we’re seeing exactly what the future of comic books should be – and possibly will be – once this series ends. The heroes, for the first time in a long while, are a symbol of hope in a world of darkness. They’re hope for the Marvel U, and it also creates hope in the readers. There’s been a great deal of lip-service about restoring comic books to their glory days, but there’s an understanding here that there’s more to it than just having an old character replace their rebooted doppelganger. The characters have to stand for the values they used to, and it’s key here.

Nick Spencer’s writing in Secret Empire #2 is again impressive, as he unveils his complex grand plan with apparent ease. The scope is epic, but he tells the tale in a way that makes it clear he not only understands the Marvel U but loves it. Matching his storytelling is the astonishingly detailed artwork, which not only brings power to each scene but carries a sense of pacing and style which is truly wondrous.

The knee-jerk reaction from some to instantly despise Secret Empire is proving to be increasingly unfounded and short-sighted with each issue. This is a class act all around, a genuine must-read series. Comic books don’t get much better than this.