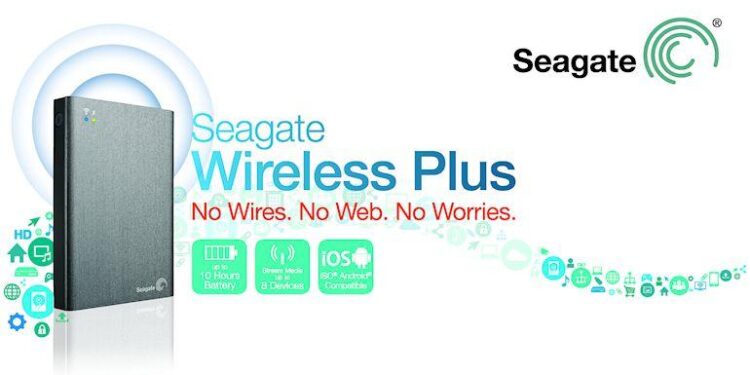 There is a continued growth on the amount of data the average human consumes on a daily basis, whether through internet, or data stored locally. In addition, the amount of connected devices we carry around at any given time has also seen a sharp increase over the past few years. Whereas many of us were content with lugging just a smartphone and laptop around, this has increased to include an additional smartphone, and even a tablet. It becomes a little trickier to manage your data across all platforms you work with, which is why a smart solution is key. This is where wireless hard-drives enter the fray; a solution that centrally stores your most commonly used data, and makes it available across the entire range of devices from anywhere, and at any time. Seagate’s Wireless Plus 2TB HDD provides such a solution.

It may seem trivial to comment on the build and design of an HDD, but considering that your device may be located in a central point in your home, it very much becomes part of the furniture of your home and deserves to look the part, if only just passing as adequate. The Seagate Wireless Plus measures 127x89x19.9mm and weighs 256g. This may not mean much to many, but consider this comparison: if you take two Samsung Galaxy S5 units and place them atop one another, the result would be 50g heavier with relatively the same thickness. This is all the more impressive considering that about half the weight and size is as a result of the enclosure, and that the 2TB drive, USB connector, battery and Wi-Fi components are squashed into it. What this means, essentially, is that you can carry the unit in your back pocket, while still have access to all your files from all your devices, if you so wish.

As for the enclosure’s design, it’s quite minimalistic. The black, brushed-metallic plastic covering is only disturbed by the Seagate logo, two LED indicators (one power and one Wi-Fi), the power button and USB port. There are four rubberised feet to keep the unit firmly secured to any surface when in use. All in all, a solid build for an impressively small unit.

One of the more impressive features about the Wireless Plus is not merely its wireless sharing capabilities, but a combination with its ability to be used as a portable device thanks to its rechargeable battery. While there is a power cable included in the contents, having the unit plugged directly into one device, by means of the microUSB 3.0 port, to generate the charge, while still streaming content for up to 7 other devices. Once the battery is fully charged, the marketed lifespan is roughly 10 hours. This number quickly diminishes with an increase in connected devices, so having it plugged in eases the stress of the unit going offline. At any given point in time, users can access work files on their laptops, play music using the home theatre system, watch a movie via the TV, and store your game progress from the console. Provided that the access speeds may be reduced being spread so wide, it is still a possibility. All that is required is to connect the unit to the internet, and then connecting to the IP address, once established. There is a downloadable Seagate app that makes life a little easier when connecting, which is available for many different platforms. Other connection interfaces include DLNA, Samsung Smart TVs, and AirPlay. The discoverable connectivity distance reaches to a maximum of 40m when in clear view.

There is one interesting aspect about the Wireless Plus, which relates to the HDD tech itself. Since Seagate themselves have yet to release a version of the 2.5” 2TB model, they instead make use of Samsung’s SpinPoint M9T HDD. You may find this an oddity given Seagate’s previous position as one of the top manufacturers in this space, but given Samsung’s rise in recent years makes it an ideal combination. Then is the simple matter that Seagate purchased Samsung’s storage division recently, so there is an abundance of resources to tap into when needed. The 9mm M9T model uses three 667GB platters, with 32MB cache at speeds of 5400RPM. Although there aren’t any speeds marketed by Seagate for the device, users should expect sequential read/write speeds around 130MB/s and random file transfer speeds of around 115MB/s. The Seagate Wireless Plus 2TB is a really nifty, portable, and convenient device and can be used in many different scenarios, concurrently for the most part. All this convenience comes at a cost, though; R2,499 to be exact. In essence the portability and wireless features will set you back an additional R1,000 compared to standard HDDs. If you’re running a small business or have a large family with multiple connected devices, then this solution is ideal for you. Although it may seem obvious, minus a few Rand from the equation, and the solution becomes extremely enticing to all prospective buyers in the market for a new HDD.