Home > Movies > The Audience Reacts To Wish Upon

The Audience Reacts To Wish Upon

Yesterday a few of our Cape Town and Johannesburg readers were treated to an early screening of Wish Upon. Thanks to Times Media Films, we hosted a press screening at Nu Metro in Canal Walk and Nu Metro The Glen. “Was it scary? Was it fun? Is it worth watching?” These are a few of the questions answered by our film critics – you, the viewers. It was a night of a few scares, laughter and entertainment for most of the audience who attended the early screening of Wish Upon, a teen horror film that blends ideas from Final Destination with a Disney teen film. If there was one lesson learnt it’s that you should be careful about what you wish for. It’s always great watching a film like this with an awesome audience, hearing and seeing people react to what’s happening on screen makes it a really fun experience. Of course, we asked the audience for feedback. And here it is:

The movie was great, it was not that scary. It started a bit slow then got interesting at the end. – Tamsanqa Mkoko

I enjoyed the Wish Upon. It was unpredictable and riveting, kept everyone at the cinemas on the edges of their seats. I am not big in horror movies, but Wish Upon is a different type of horror movies. It is like a horror movie with a twist. My wife, I and two other friends really had a nice Thursday evening. – Thapelo Mokgothu

If you take it on the value of what it is, a teenage horror film aimed at a younger audience, Wish Upon is quite entertaining and fun. – Esther Saunders

What a wonderful way to spend my Thursday evening with my partner. The movie is so unique and eye-catching. I was engrossed from start till finish. It has awesome characters, different and funny. It is not your typical horror movie as it has twists and turns. That is precisely what I look forward to when it comes to movies. – Lee-ann Smith

The movie was thoroughly enjoyable. I quite liked the fact that the background and origins of the wish box was brought into the story, giving the viewer an understanding of how and why the wish box behaves the way it does and why the blood price had to be paid. The cinematography was done exceptionally well, however, I did find that the lead actress lacked a bit on the emotional side especially in the realm of remorse and regret for her actions. Overall the movie was thoroughly enjoyable and I will be recommending it to my friends and family to go and see when it is released for public consumption. – Bhavesh Valodia

Excellent story. Appreciated the story link on the wish box. Great acting from our young lead lady… My favourite part was the inheritance and how she reacted to this great fortune… Her immediate reaction was to spoil her closest friends. My disappointment came at the end… The end was too predictable. – Nalinee

10 OUT OF 10. LOVE THE MOVIE from start to the end. Makes you think about wishing for something… – Mark Gavin Sylvester

The movie was different. Had a bit of nail-biting scenes and gore which is always good. – Mohammed Feroze Sarlie

The movie was tolerable. It was certainly not what I was expecting.The film lacked gore or creativity and the characters were shallow. Even though it was a perfect scary film for a teenage audience. – Che Kelly

I thought the movie was okay. Scare factor just wasn’t there at all and it started to become a bit predictable. Great spooky horror for teens though. – Naeemah

The age-old Monkey’s Paw curse has been done many times before on film, and as much as this movie tries to keep the subject current with the use of a high school setting, complete with the popular bitchy pretty girl, the handsome popular unattainable jock and all other cliches, it falls slightly short on the scare and horror factor it sells itself upo. This is due to seemingly oblivious lead who, despite all the very clear signs, only realises near the end of the film that maybe what she is doing is wrong. A strong performance buy the young female lead helped salvage what could’ve been a complete disaster, and if you want an easy watching night in with friends movie, this will do. But don’t expect the levels of scares found in related pieces such as The Conjuring or even Annabelle. All in all an enjoyable experience, but no magic here. – Quentin Rood

I really enjoyed the movie. It kept you in suspense. I got a fright once or twice. the story kept me involved. It was not drawn out or anything. Really enjoyable and worth going out to watch. – Patt

The storyline had potential but dragged a bit out long. No real screaming moments because of the age allowance. Final destination in wish form. Nice story. – Leon Constable

The movie was quite predictable and it felt like a Disney movie during certain scenes. All the while still being very entertaining. – Johan Stemmet

The movie wasn’t scary and followed a poor storyline. I found they didn’t do a good job of building the characters. It had some decent gore and to its benefit a very unexpected ending. A decent viewing overall. – Wendyle

It was entertaining at times, but everyone involved (except maybe the lead actress) seemed to be giving their minimum effort while plodding through a stale formula that’s been played out again and again for the past ten years in mainstream horror. It was absolutely unimaginative and left me feeling like I’d just consumed the film equivalent of a MacDonald’s meal. Meh. – Inge Papp

The trailer was better than the whole movie. – Nic Manshon

We enjoyed the movie, especially the plot twist at the end. – Charles Kayer

Absolutely loved the storyline of the movie. – Dianne Hutchison

Gave me a new meaning on the age old saying “be careful what you wish for”. – Denise Simons

Loved the movie. Makes you think. Be careful what you wish for as it might come true. And what will the consequences be? – Joy Rossouw

The movie was good. I think more gory scenes would have made it great! Some nice humour also brought in here and there was also cool! – Cindy Harley

A different type of a horror movie, in a good way thou!!! Enjoyed every minute of #wishuponmovie @LeeAnnStylish @FortressofS pic.twitter.com/QjZmbEdcGl

It was a great movie. Although a bit scary, it was also funny. I enjoyed the movie. The movie challenges you to focus especially on the wishes and takes a U-turn at the end. – Tshepang Monare

I really enjoyed the movie. It had a very different storyline and I was tense in a lot of scenes but feel like the acting wasn’t 100% natural and not as believable for what was happening. The ending was also very different than I pictured and it caught me off guard. – Dani Gonzalez

A bit of comedy meets gore in this teeny-bob movie. The scare factor wasn’t too high, but for someone who doesn’t enjoy nightmares and likes the “oh no!” of the Final Destination-esque death scenes, I quite enjoyed the film. However, for horror fanatics, it would definitely fall flat. – Stacey Petersen

Wish Upon reminded me a bit of the Final Destination set of movies, but far less blood and gore which was a lot better in my opinion. I did expect a bit more scare and suspense but overall it was very enjoyable. Its a horror I would recommend as it does not leave lasting scare memories to give you a sleepless night. The story will resonate with a lot of younger viewers in terms of the social dynamic. – Triston Smook

I found it really lame and predictable, to be honest. Also lazy dialogue, story and soundtrack, all bad cheese. This director should leave horror and action films alone now, because they’re not working out for him. – Kerwyn Fourie Awesome movie! Very much in vain like the Final Destination movies. Loved the concept of the hero actually being the villain of the movie. Normally the end of these type of movies are predictable… this one was not. – Farryl Meyer

I felt the story was not scary at all and there were way too many holes in the plot. But none the less, it was an entertaining movie. – Belinda Woolley

Wish Upon started out a little predictable for me, like those teenage movies, but I was never ready for the little twist that followed which kept me intrigued for what was to come. I definitely enjoyed it and take away the lesson of ‘be careful what you wish for’ as nothing in life is free. – Nadia Swartbooi

I thought the movie was great. It didn’t take itself too seriously, adding humour in with all the freaky deaths and scares. The pacing was great, which I enjoyed, moving the story along in a nice swift flow. I will say that it had a bit of a Final Destination vibe going, which works for this story and I can easily see a couple of sequels happening. – Alwynne Baatjies

Really enjoyed the movie. Classic. 7 wishes and it always starts with 1. Money 2. Fame (popular) and 3. Love. Throw in the fact it’s a teenager in high school. Awesome tension building in the death scenes. – Lawrencia Fredericks

The movie was entertaining, not a typical gorefest horror. It was a good way to end the movie, however, the story felt a bit rushed and could have been better executed by the main actress, came across as very childish. – Riyaadh Sadek

The audience was great! The movie itself though, not that great. I was expecting a lot more scares but it was more like a teenage comedy, quite disappointing. The acting was terrible as well even the actors were actually great in other films. I would give Wish Upon a rating of 4/10. – Ayesha Hartley

The movie was great. Something different for a change! Won’t promote it as a horror though, it’s more a Comedy/Suspense/Thriller. But nevertheless, very enjoyable, a good storyline with some laughs and a semi-unexpected ending – Hanro Visser 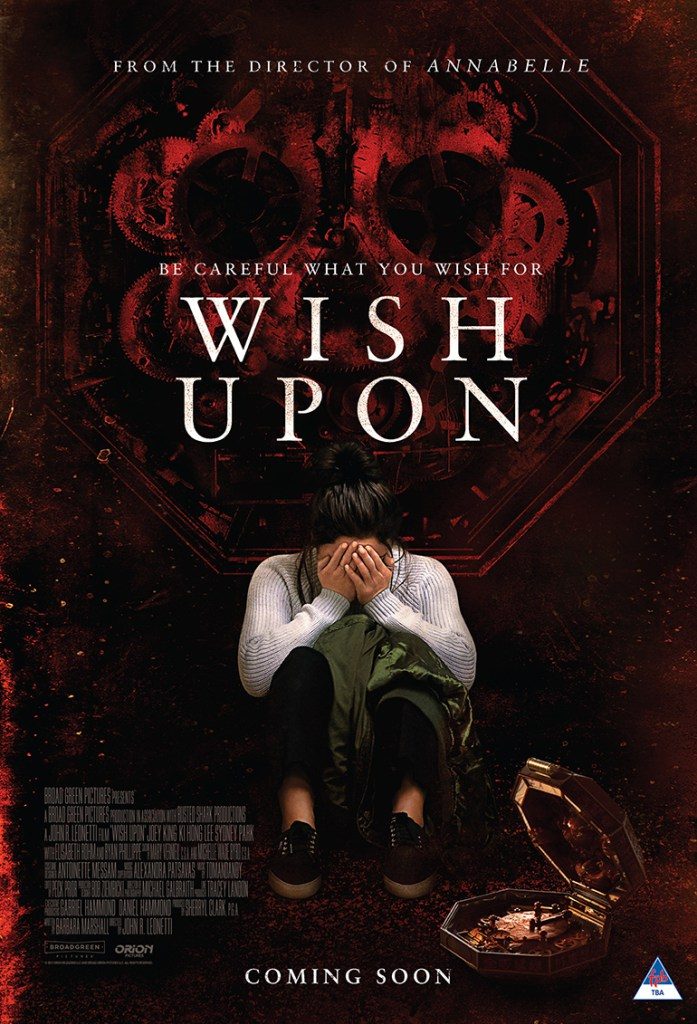 Twelve years after discovering her mother’s suicide, 17-year-old CLARE SHANNON (Joey King) is bullied in high school, embarrassed by her manic, hoarder father JONATHAN (Ryan Phillippe) and ignored by her longtime crush. All that changes when her father comes home with an old music box whose inscription promises to grant its owner seven wishes.

While Clare is initially sceptical of this magic box, she can’t help but be seduced by its dark powers, and is thrilled as her life radically improves with each wish. Clare finally has the life she’s always wanted and everything seems perfect – until the people closest to her begin dying in violent and elaborate ways after each wish. Clare realizes that she must get rid of the box, but finds herself unable and unwilling to part with her new-and-improved life – leading her down a dark and dangerous path.

Wish Upon releases nationwide on the 6th of October.