Scooby Apocalypse #9 Review – Not For Children Or The Squeamish 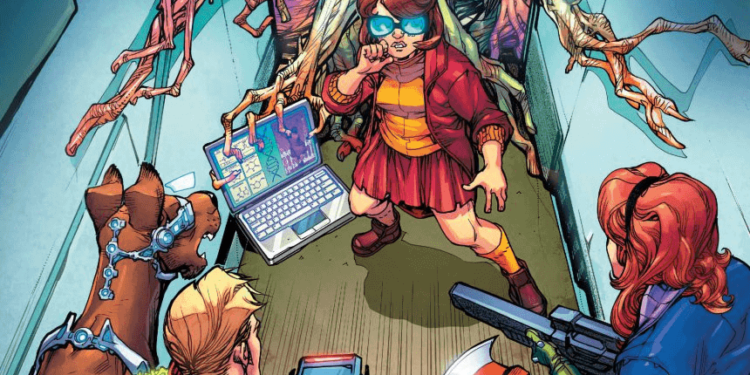 There’s an overwhelmingly dark tone to Scooby Apocalypse #9, one which can’t be avoided. Sure, there are still a few gags here and there, but even those are just one short step away from gallows humour. Even Shaggy, the eternal optimist, begins to accept that their fate is probably going to be an awful one. As for Velma’s continuing story, the tragedy of it and the burden placed upon her make this storyline increasingly compelling. Mystery Inc. are recovering after their latest ordeal. Having narrowly escaped from the Living Hospital, they’re holed up safely and Fred’s broken leg is healing. Daphne is her usual grumpy self, Shaggy and Scooby-Doo have eaten everything in sight, and Velma… Velma’s having problems. When she learns the truth about the apocalypse and the part she played in it, she becomes violently sick. Then again, she seems to be getting sick in other ways too, and when the team hit their latest pit-stop she sets out on her own.

Meanwhile, Scrappy is proving that puppy power is more than just a physical enhancement, it’s a state of mind. While battling mutated monsters and scavenging for food, he comes across a pet store which is home to some starving puppies. But is it right to help free them, and let them loose in a world where they’ll be hunted down and killed?

As action movies would point out, this sh*t just got real. The dark tone gets even darker with Scrappy’s backup story, as we see a level of intensity, power and pathos greater than you could imagine. His actions are simultaneously horrific and entirely understandable, and this is easily the best incarnation of his character ever.

The art in both stories continues to be strong, and despite contrasting styles they both flow smoothly and look great. As for the writing, this may sound like a wild statement but this has to be one of the strongest pieces of work since Alan Moore’s “Pog” story back in Swamp Thing.

Giffen and DeMatteis’s greatest ability in comic books has been to create comedy which makes you care about the characters, and then while you’re laughing they hit you with shockingly serious drama. It’s a sucker punch to the readers, one which holds knockout power when done properly. They’ve teased at it before in this series, but in Scooby Apocalypse #9 it’s executed to perfection and the final moments will haunt any reader.

Be warned: Scooby Apocalypse #9 isn’t for children or the squeamish; but for those who read it, the rewards are huge.