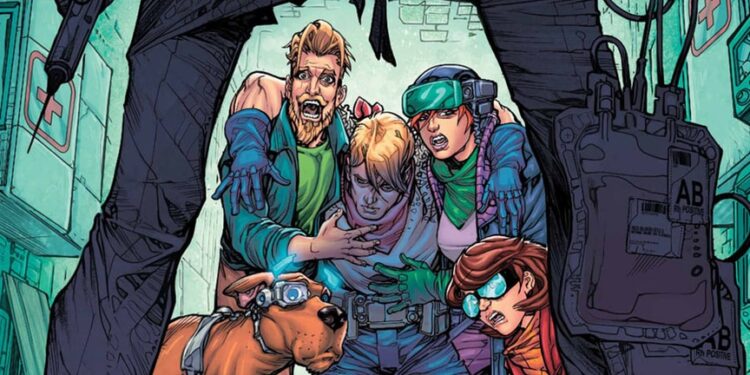 Having escaped from the giant supermarket, Mystery Inc. arrive at the local hospital where they desperately need to set Fred’s broken leg back into place. Since Shaggy tends to get squeamish in medical situations, he and Scooby start hunting around for some much-needed medicine, while Velma plays doctor. Velma isn’t the only one doing that though, as Shaggy, Scooby and Daphne discover when they investigate if anyone else has survived the apocalypse. The appearance of a monstrous doctor causes the whole hospital to come to life – or so it seems… We review Scooby Apocalypse #8. [dropcap]O[/dropcap]nce again the Scooby Apocalypse series continues to go against the grain and common sense, and even though the concept may be wonky there’s some genuine promise here. Why? Because in Scooby Apocalypse #8 the mystery element returns, with theories about pacemakers, implants and hallucinogenics all coming to the fore. It’s an intriguing one, since there’s no logical reason for the hospital itself to be coming to life – at least according to Velma.

Not only that but the dialogue and character interaction is on top form and at times it’s laugh-out-loud hilarious. Matching the great writing is the art by Dale Eaglesham and Ron Wagner. While not as slick as Howard Porter’s work, the detail, shading and panel layout are all impressive and convey a horror/comedy mood similar to classic EC tales. All in all, it’s a great performance from everyone involved in what (sadly) is still a shock to the system for many long-time fans. That being said, at this rate the creative team are overcoming that problem and making this series their own. That’s why it’s a little tragic to see Keith Giffen and JM DeMatteis self-deprecatingly referred to in the credits as the Sammy Petrillo and Duke Mitchell of comic books.

If you don’t know those names, look them up. But then, that’s kind of the point and that’s what makes this a little sad. The team at Scooby Apocalypse are creating top-notch work which is superior to those of many other creators, and yet they have a small audience and aren’t being appreciated. However, the true measure of creative success isn’t financial, even if some companies believe that’s the bottom line. The real success comes from creating something which people find entertaining, and in that the Scooby team hit every target.

Maybe Scooby Apocalypse is like Petrillo and Mitchell too; It certainly isn’t famous and it may not be topping the bill at DC, but it’s a class act which just keeps getting better.