Well, it’s back to the world of Scooby Apocalypse… again… in Scooby Apocalypse #5. Which isn’t such a bad place to be, if you happen to like a monster infested, post-apocalyptic place. The weirdest thing is that it looks great and has a lot to say for itself, so why is it one of those places where you aren’t happy going? [dropcap]T[/dropcap]he not-quite Mystery Inc. gang are still at the convenience store, where they stopped in for supplies. As before, Daphne complains endlessly about pretty much everything, while Velma continues to put together the pieces of the mystery at hand. Velma’s also convinced that if the apocalypse is a global problem, there may still be other survivors out there.

Their real problem though is that they come under siege from a horde of monsters and have to hide out in the storeroom. Velma comes up with some theories about the behaviour pattern of the monsters, Daphne complains even more about Velma, Scooby and Shaggy come to realise that they’re both scared, and Fred nearly gets eaten by a young girl who transforms into a creature from Resident Evil. There must be a better way to get a new laptop… Once again the art in Scooby Apocalypse #5 is wonderful, and once again the writing – in particular the huge chunks of dialogue and exposition – is more than engaging. Yet once again the problem is the story itself. It’s going nowhere fast, like the series seems to be lacking and sense of direction or progression. There are clues here and there, but the whole mystery seems to be so far on the back burner that it’s barely simmering. Likewise, as survival horror it isn’t quite tense enough to work properly.

And that’s why there are problems going there. There are so many positives at work here that it’s almost heartbreaking to keep having to review this so negatively because of the drawbacks. I’ll continue to read this, and to be honest it’s one of the titles I look forward to each month because I desperately hope it gets things right. But until this series makes some big moves forward, I can’t keep doing this. When that happens I’ll be happy to review it again, and I hope that those who are enjoying it continue with it.

But for now I’m saying a big “Zoinks!” and I’m outta here. I’ve got to get myself some well-earned Scooby Snacks. 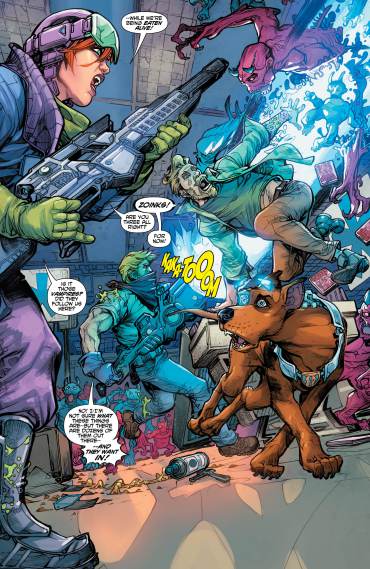