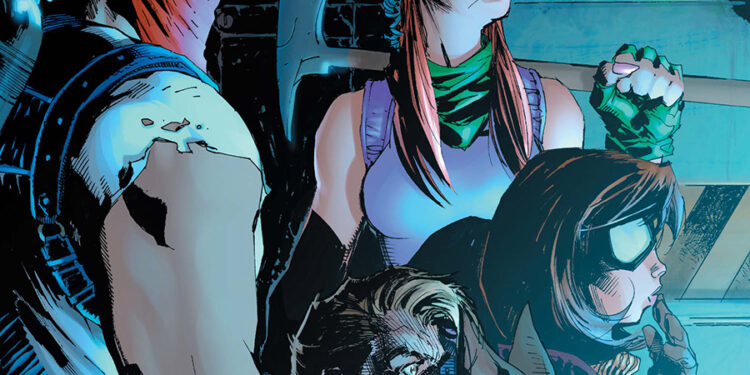 It’s time once again to see how our rebooted, re-imagined not-quite-Mystery-Inc’ers are doing in Scooby Apocalypse #3. And sadly, the answer is not too well. [dropcap]I[/dropcap]n a step backward from the last issue, we learn how they climbed aboard the Mystery Machine and make a daring escape from the science labs. Then they wander about for a while, lamenting how bad things have gotten and looting a petrol station convenience store. There’s some character development as we learn a little more about what makes them tick: Shaggy, when operating out of blind panic, can be a hero; Fred has been hopelessly in love with Daphne for years, and his affections have been rebuffed repeatedly; Daphne is so determined to be independent that she refuses to allow others to help her, to her own detriment; and Velma isn’t really as frosty as she seems to be.

Unfortunately though, there really isn’t much else to Scooby Apocalypse #3. Despite all the dialogue, there’s only one instance of any actual camaraderie. Scooby has so little to do here that even his holographic emoticon display doesn’t offer anything. The mystery of the situation, if it really is one, is still so vague that it passes by almost unnoticed in favour of offering a few basic Walking Dead-type moments of survival horror. A few potential clues are mentioned, but there seems to be so little emphasis on solving the problem that it’s hard to know if they’ll ever amount to anything.

And that’s the real problem. For as good as the art is, and the for all the great writing talent behind it, the series is going nowhere fast. Actually, it isn’t even going nowhere fast, it’s going nowhere very, very slowly. There’s so much potential here but it feels like it’s being wasted. It’s the third issue and yet there still doesn’t seem to be any sense of direction to it, and now the fun is fading too. Scooby Apocalypse asked readers and Scooby fans to take a leap of faith and give this series a chance, but it isn’t paying dividends.

I have a confession to make… I’m a fan of Howard Porter’s artwork. More than that, I’ve been a huge fan of Giffen & DeMatteis for over thirty years and consider them unofficial comic book royalty, true legends who have been unappreciated by many. I know these guys can make a great quality comic book, so it breaks my heart to give a negative review to anything they work on. But this isn’t a great issue, and this series – already a risky prospect – needs to do better if it hopes to keep its readers.