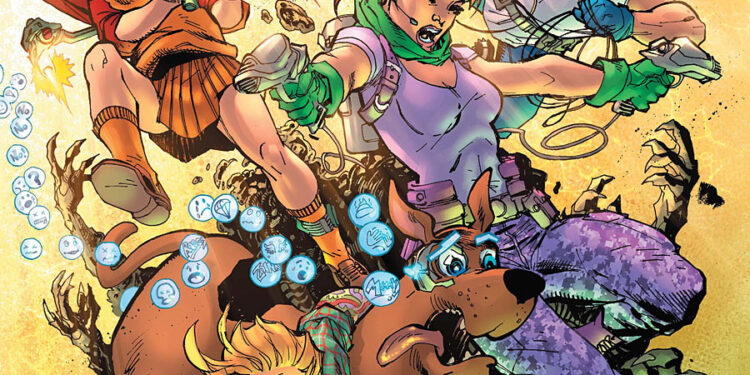 Rebooting something is easy. Keeping momentum after that first issue is hard. After laying so much groundwork in that first issue, Scooby Apocalypse #2: Apocalypse Right Now! is an improvement where you see it paying off already. [dropcap]P[/dropcap]icking up where the last issue left off, our heroes who aren’t quite Mystery Inc. yet are trapped in the underground scientific complex where Velma, Shaggy and Scooby-Doo work. Believing that the nanite plague has been unleashed and is turning everyone into hideous monsters, their immediate goals will be familiar to anybody who knows the Resident Evil zombie storytelling formula: survive random attacks, get the hell out of there, and if possible grab whatever evidence they can find along the way.

And that’s the whole issue.

If that sounds weak, don’t be fooled. Scooby Apocalypse #2 appears to be trading in on exactly what this writing team does best, which is building characters and having them talk. A lot. There’s more dialogue in a single page of this than you find in some entire issues of other comics, and as such it makes for a great story that shouldn’t be rushed through. There’s action too, as Daphne goes on the offensive and is proving to be the muscle of the team, despite her regrets about it. Velma, meanwhile, contends with survivor guilt while Scooby and Shaggy struggle to cope with the situation. The only one somewhat left out is Fred, but it’s becoming evident that all of the characters will get their time to shine. Plus they discover the new incarnation of the Mystery Machine, so all the pieces are falling into place. There’s another element to this story too, one so crucial to the Scooby-Doo formula that it’s reassuring to see it coming to the fore, and that’s the mystery itself.

With so much going on and being said in Scooby Apocalypse #2, it’s a pleasure to see Velma starting to work out that things may not be all they seem in this apocalyptic situation. There’s a mystery to solve, with the nanite plague effects seen being vastly different from what was planned, and how the plague couldn’t have been released at all given the circumstances. While the answers are still to come, there are a few pieces to the puzzle already which readers may have started piecing together.

Some moments will make fans laugh, such as Velma’s “Jinkies” rant, although there’s still a great deal to be explained with the characters. It’s looking increasingly likely that Velma is blind, while Scooby’s emoji digital display bubbles are a curious addition. With the strong writing and character development going on, it’s likely everything will be revealed in time and this comic just needs readers to be patient.

If this series continues to progress like this, it’s definitely one worth keeping an eye on. The style and re-invention of this new Scooby-Doo series may not be for everybody and is still a little jarring, but if readers can get beyond that then there’s a lot on offer.