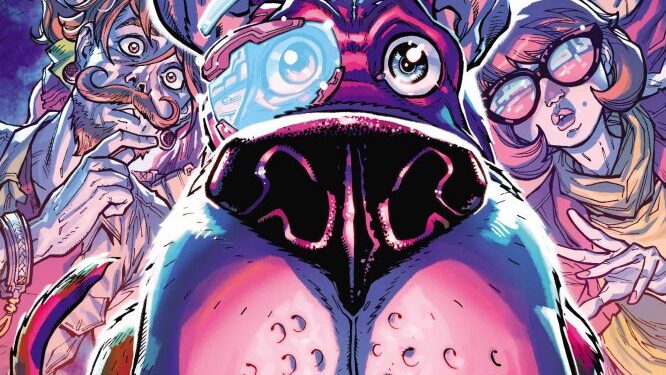 If I’ve got a regular complaint about Scooby Apocalypse, it’s that I wish the tempo of the story were just a little faster. Don’t get me wrong, I’m not after a slap-dash breakneck pace of storytelling, it’s just that small events in this series tend to be drawn out at times. That being said, if this series didn’t take its time, then you may never have wonderful moments like those which appear in this issue. Having witnessed Scooby-Doo and Scrappy sacrifice their lives to save them, Velma, Shaggy and Daphne hide in the trees above the monsters who have gathered. As time passes by for the terrified trio, Daphne reflects on the events of her life which have brought her to this point, regretting how poorly she’s treated those around her at times. Meanwhile, Fred and Daisy stand guard over Scrappy’s pet boy, Cliffy, and wait for some sign of hope that their friends are alive. As they do, they discuss their own feelings and their place in the monster-infested world, and whether they’re personally stronger because of it. And, in the backup feature, Secret Squirrel is being equipped for his latest mission. However, when he learns that his partner is his former lover Honey Bea, things get awkward…

Over the course of sixteen previous issues, we’ve gotten to know our Mystery Inc. gang pretty well in terms of the basics. We know how they function as a group and what their strengths and weaknesses are, but up until now we only really got to know Velma on a more personal level. Her personal tale was heartbreaking and, in this issue, it’s time to learn more about their leader, Daphne. Her story may not be as sympathetic as Velma’s, but then she’s a completely different character and thankfully the writers understand that and treat her accordingly.

The parallel to her story is Fred being allowed to express his emotions for her once again, with slightly more explained about their curious friendship. It’s a smart piece of creative work that Fred’s own narrative expands on Daphne’s too, allowing us to see the dynamic from both sides even though it’s her tale. While all this may put the actual apocalypse storyline to one side, the overall plot doesn’t suffer in the slightest. The Secret Squirrel backup continues its light-hearted spoof of spy thrillers, although it’s questionable where it’ll fit into the bigger picture, if at all. Either way, it’s zany and fun, with some banter that’s laugh-out-loud hilarious.

Once again Giffen and DeMatteis turn in some solid writing, while the art by Dale Eaglesham on the main story is ideally suited to this series. Rick Leonardi’s art on the Secret Squirrel backup feature is playful, again matching the tone of the writing in an almost cartoonish way and, hopefully, we’ll get to see more of his work in the future.

All in all, this is another impressive issue of what could be DC’s most overlooked cult hit series, Scooby Apocalypse.