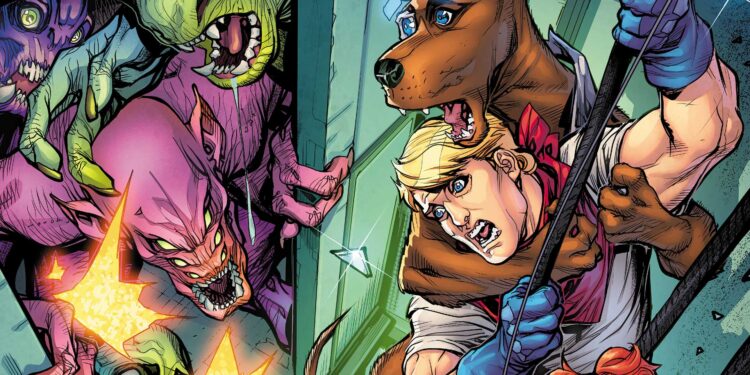 There are times when the creators on a title ease back on the storytelling throttle entirely. Sometimes it can lead to drawn-out moments and ruin the pacing entirely, while other times it can pay massive dividends by allowing the characters to develop further. Thankfully Scooby Apocalypse #13 offers up the latter, and with incredibly heartfelt results. Not a single page is wasted, and the pacing is timed to perfection.

The vile Rufus Dinkley, safe in his tower, believes that the future of the world is now in his hands. The population of the world may have all become monsters, but he truly believes that they’ve gathered outside to worship him. Yet the view of the world seen from Fred’s street-level vantage point is a very different one. Now, Rufus just needs the right person to rule by his side, and the person he’s chosen is his sister – Mystery Inc’s Velma. But will she reject his offer and atone for her family’s sins, or will she choose to join forces with her brother and turn her back on her new friends?

Meanwhile, Scrappy and his gang continue to track down Velma, Scooby and the gang. Yet taking care of his new pet, the young human boy known as Cliffy, is proving more difficult than he intended… Once again the Trump-like Rufus Dinkley allegory hits home, this time even harder than before. It works on various levels, from his abusive, all-controlling nature feeding his ego to his skewed interpretation of the population. He’s possibly one of the most repulsive characters in all of comic book history, primarily because he seems so painfully real.

That same jarring sense of reality applies equally to the character’s wife, desperate to escape from the cycle of drugs, belittlement and physical abuse that she’s become trapped in. The Mystery Inc team in this issue aren’t the obvious gun-toting heroes as before but instead serve as a source of inspiration and courage – which makes them even better. As usual, the writing effortlessly balances a grim storyline with well-timed moments of comic relief. In the course of reviewing this series there’s been much said about the writing, and rightly so. Yet the standard of art on this series has been equally impressive, and real praise must be given to Dale Eaglesham, Tom Derenick and Jan Duursama. Not only is the artwork attractive but it flows smoothly and there’s so much detail that it’s mind-boggling. Some of the monster designs are so astonishingly creative and disturbing that it’s like the writings of HP Lovecraft have been given form.

This is a series which has not only hit its stride but keeps pushing to be even better. Impressive writing and incredible art combine, and the whole of Scooby Apocalypse #13 is even greater than the sum of its parts.