Scooby Apocalypse #11 Review – Gets The Story Back On Track 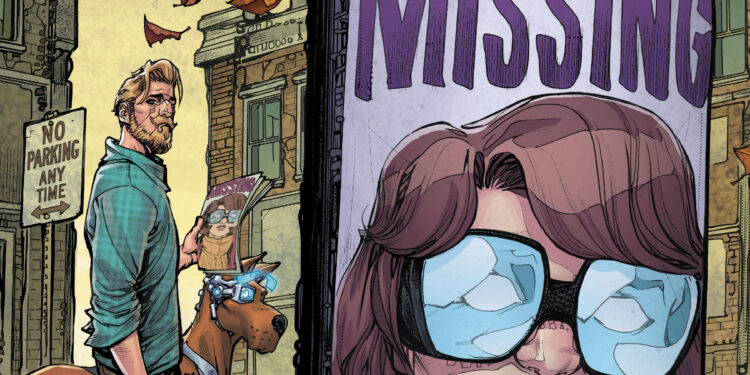 Velma is missing, having run away from her Mystery Inc. companions after being confronted with the evidence of her involvement in the global apocalypse. While Shaggy and Scooby-Doo desperately search for her in the never-ending wasteland of what used to be America, an injured Fred stays behind with Daphne as they try to fix the Mystery Machine. We review Scooby Apocalypse #11. For each of them, it’s time to collect their thoughts and come to the realisation that they’ve become more than just a random group of people – they’ve become a team, and more importantly they’ve become friends. As Velma battles for her life against motorised monsters, fate and the potential cure for humanity draw them in the same direction. And all the while, Velma’s brother searches for his own solution, in an entirely different way…

Okay, as cool as it is seeing a new villain waiting in the wings, I’m about to say something which I would never have thought possible… I miss Scrappy-Doo. Come on, guys! You can’t make him cool (for the first time ever, probably) and then not give us more! Anyway, on with the review.

After a somewhat disappointing previous issue full of filler, Scooby Apocalypse #11 not only gets the story back on track but provides exactly what this series needs: an identity of its own. With the early issues plodding through an all-too-familiar Walking Dead scenario, and with the spectre of every previous incarnation of Scooby-Doo hanging over this series, it’s been an up-hill battle to keep in mind the originality of this series. It’s mostly offered superb writing and art, but it’s only now that it really comes across as something truly unique. The characters have, for the most part, now been fleshed out so well that it’s easy to understand their conflicting (and conflicted) natures. The comedic, action and mystery aspects of this series are still there but tempered with raw, powerful emotion and it works. A scene where Velma, full of self-loathing, questions why the others would search for her after all she’s done to the world is a true high point which defines her. That level of care and attention is shown with all of them making this a true character-driven story.

Once again the art continues to impress, with Dale Eaglesham’s work being just as solid (if less flashy) than Howard Porter’s earlier issues. Eaglesham’s understanding of sequential art to tell a flowing story, from close-up emotional moments to wide shots full of excitement, are a visual treat even if you don’t realise it while reading it.

And that’s something which makes Scooby Apocalypse #11 truly special. It sucks you into its world, and you don’t just read it, you experience it.