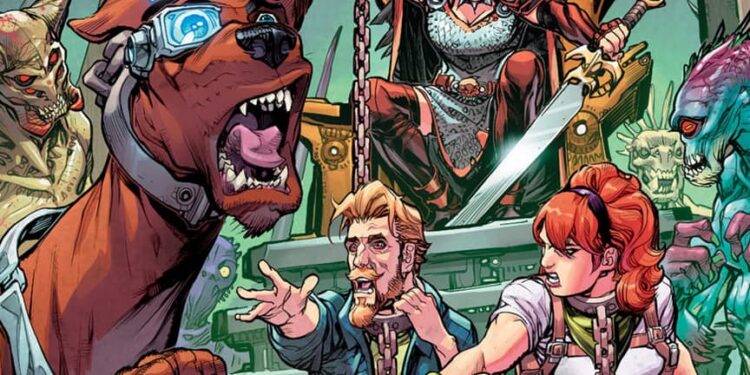 The battle for humanity is nearly over. Velma Dinkley, the mastermind behind the nanite plague which has transformed the human race into monsters, finally accepts her place as the evil ruler of the planet. The few remaining humans have gathered together to form a small community of resistance fighters, but their greatest hope – Daphne Blake – has been captured and is now in Velma’s merciless clutches. We review Scooby Apocalypse #10.

All that remains is the hope that Fred, Shaggy and an upgraded Scooby-Doo can rescue Daphne and turn the tide of war. Fred’s devotion for Daphne criticised to be their undoing though, while Shaggy believes there’s still hope that Velma may have some good left in her… I’m serious. Don’t read what I’m about to say.

What are you, a glutton for punishment? This is a major spoiler. You shouldn’t keep reading this. This is your last chance.

Fine. Have it your way. Just don’t say that I didn’t warn you.

If you’ve been following this series, you’ll know right from the start of Scooby Apocalypse #10 that things don’t quite seem to add up. At the end of the last issue, Velma ran off in a panic after having hacked into the research facility she used to work for, and she certainly wasn’t the ruler of an army of monsters. Likewise, you’ll know that she never performed any such upgrade on Scooby which has improved his speech patterns. It really isn’t a spoiler that you’ll know what that means.

It’s Bobby Ewing stepping out of the shower all over again. As a rule, I’m not a fan of stories like that. For the most part, they fill space and offer very little in the way of adding anything of value. I’ve criticized other titles for the same thing, and it takes something special to sway my opinion. Sadly, this doesn’t quite pull that off.

There’s tension, comedy, drama, and for Velma fans, it’s a great chance to see her as an evil, scantily-clad siren – assuming that’s what other Velma fans want to see. The writing is still solid, and the final pages of Scooby Apocalypse #10 really do matter. But in general, it’s a let-down, not so much a step backward as more a case of staying stuck in the same place and offering nothing new.

That being said, there’s a clear feeling that things in this series are coming to a head. The elements of the mystery have been laid out, the plot has followed a clear path, and now the time for the final stand is upon us. Which, if nothing else, should keep readers eagerly awaiting the next issue.

Plus, seeing Velma’s butt-cheeks is kind of cool, in a totally wrong sort of way.