Scooby Apocalypse #1: Waiting for the End of the World – Comic Book Review 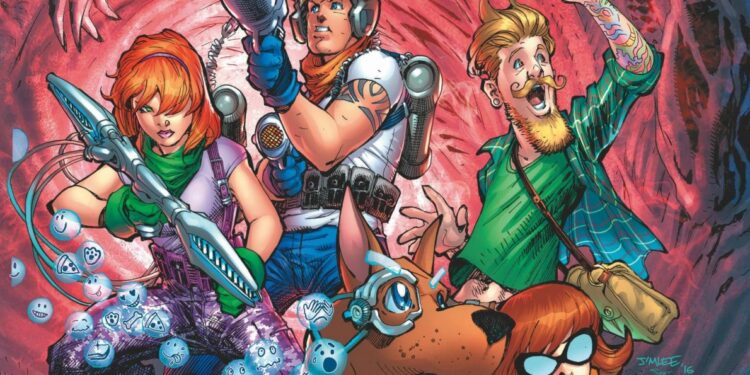 Scooby-Doo may turn 47 this year, but this new series, Scooby Apocalypse, is anything but old. In fact, as re-imaginings and reboots go, it’s so new it’s futuristic. [dropcap]T[/dropcap]he old gang of Mystery Incorporated are here, but they aren’t like anything you’d expect in this updated sci-fi scenario. Daphne Blake and Fred Jones are a failed TV journalist and her argumentative cameraman. Velma Dinkley is re-imagined as a scientist whose speciality seems to be genetic research. Norville “Shaggy” Rogers is still a lovable dropout and a kind-hearted dog-trainer, although now with psychedelic tattoos and a Salvador Dali moustache. Scooby-Doo himself is a genetically-altered dog, complete with a Borg-style electronic eyepiece who was created as part of a military experiment.

When Velma learns that the research group she’s working for is about to unleash a nanite plague upon humanity, she tries to pass this information on to Daphne and Fred. Stumbling across this meeting are Shaggy and Scooby-Doo, and they realise they’re all in trouble. Shaggy shouldn’t be taking Scooby out of the labs for pizza, Velma shouldn’t be handing out company secrets, and Daphne and Fred are on to a case which is too big for them and could get them killed.

Velma takes them all for a tour around the science labs, although Shaggy maintains that he’s never seen or heard about any sort of nanite plan in all his time working there. Velma maintains that it’s true, and that Shaggy’s low-level job meant that he was kept out of the loop on this scheme. When the lab goes into lockdown and everyone in the outside world is mutated into a monster, it’s clear which of them was right… The backup story concerning how Shaggy came to work for this sinister company and first met Scooby-Doo adds a little background to their relationship in this series. It also gives us a chance to see exactly what makes this version of Shaggy tick. Far from being a coward as he is traditionally, he risks his life to save Scooby and it solidifies their bond as lifelong friends.

This is probably the hardest comic to review, ever. If you’re a long-time fan of Scooby-Doo, then you may be astonished at the art, story and characters in this. They’re about as far from the originals as you can get, while still maintaining a lot of the core essence of the characters. However, as seen in the TV show Scooby-Doo: Mystery Incorporated, it’s possible to push the boundaries in surprising and rewarding ways and still be faithful to the original. Even so, nothing could prepare a Scooby-Doo fan for this. The world they live in resembles a cross between Blade Runner and Mardi Gras. By starting the story at a time before the characters are a team, it’s a chance to introduce these new incarnations to the readers. It works, but probably not as much as it should have. Daphne comes across as a weak Lois Lane figure, while Fred seems to be little more than her bungling arm-ornament. Velma fares better, although her motormouth cynicism may be off-putting. Shaggy comes across the best, although only because of the backup story. Scooby… that’s a tough one.

Reinventing iconic characters always comes at a price, and here Scooby-Doo doesn’t come across as funny or particularly lovable – both vital traits for everybody’s favourite mystery-solving canine. Maybe it’s the art, which works really well for everything else except Scooby, or the fact that he seemed relegated to being in the background of most scenes, but he just didn’t come across as any Scooby-Doo the fans know and love.

The story and dialogue work well, thanks to the old JLI dynamic duo of Keith Giffen and JM DeMatteis, but at a price. There’s so much time spent introducing the characters here that the actual plot of the series doesn’t kick in properly, which means you’ll have to wait for the second issue to get into it. It’s great having seven (gorgeous) variant covers, but what good is it if you can’t tell if the story is worth investing in? Is it an action series? A mystery? A comedy? It’s impossible to tell at this stage.

Clearly there’s a long-term plan here; if a comic like Archie can successfully shake up its style then so can Scooby-Doo. The question is whether they’ve gone too far with this. It looks great and the writing really helps to lay the foundations of the series impressively. Still, whether it’s Scooby-Doo at heart or not remains to be seen, and it’s hard to tell if it’ll catch on with audiences.

These points aside, it’s well worth a read even if only to satisfy your curiosity. But be warned, this is something new so it’ll take time to get to grips with it.