Schuks! Pay back the money! Review 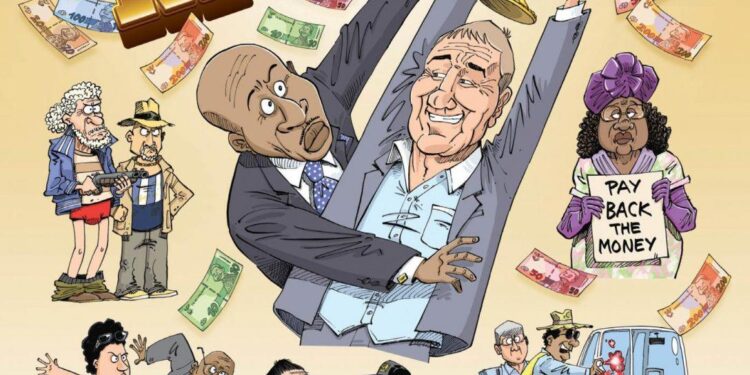 Schuks! Pay back the money!, the latest offering by Leon Schuster is claimed by the long-time comedian as being his last candid camera picture. He just can’t take getting hit so much anymore at his age by herds of angry South Africans. And while his swan song in the genre doesn’t quite hit the highlights of his finest work from previous years, it’s still an above average offering from the man that South African’s either love or hate (or even both).

Schuks! Pay back the money! is again a collaboration with long time Leon Schuster director Gray Hofmeyr, and two old faces are brought back to the party as well; that of Ivan D. Lucas and Gerrit Schoonhoven, who reprise their roles as bumbling criminals Bossie and Savage, last seen in Sweet and Short way back in 1991. The two are clearly skilled at the kind of comedic personality required for their roles, but they were used only to small extents in the film.

Schuks! Pay back the money! has the framing device of Schuks (Leon Schuster) being responsible for the loss of the famous Currie Cup, and he is tasked by a government minister (Desmond Dube) to produce a film praising the merits of South Africa, in lieu of punishment. Bossie and Savage enter the story as the true thieves of the cup, and their bumbling attempts to make a profit from it are quite funny because of the actors. However, the rest of the time the framing device is kept to a minimum, which is probably for the best, as it’s the weakest part of the film.

The rest of the film is taken up with candid camera pranks of the kind Leon Schuster is famous for. The best of these are the ones that play off daily South African fears or concerns, and which are handled in public settings. The ones that are set in smaller areas with only one person generally being pranked tend to fall a little flatter, not least of which because sometimes the audio dubbing quite clearly messes up during these close up sections.

Of the outdoor pranks, some of the best involve Schuster playing a government official, either there to disconnect the plumbing with no excuse or to confiscate peoples recently purchased alcohol for no reason. The very human and South African responses to pranks such as these make them worthwhile. Another great one was when the set up was that a Chinese fishing consortium was purchasing all the land owned by a small, proud Cape Point fishing town and that a town meeting was being held to inform the residents that all their homes would be removed. The genuine responses by these locals made me proud that we have such strong people in our country still.

Of the one-on-one pranks, my favourite was probably the one where Robbie Wessels was brought into a court on a minor traffic charge and was grilled by the judge over his character and history as a songwriter, and the look on the poor man’s face as he is told that he’s going to jail because Leeuloop was so bad was quite funny, although my heart did go out to him.

Otherwise, Schuks! Pay back the money! suffers when it tries to be too obviously political, and some of its cheap shot jokes feel a little cringey. One of my all-time favourite Schuster pranks was when he went to a strongly AWB town during the early 90’s, during an AWB rally, pretending to be an Indian man there to stir up trouble. At times in this modern film, that same kind of shear shock value and bravery almost shows its face. But I think I agree with Schuster. Maybe he is a little old to still keep getting klapped unexpectedly while wearing prosthetics. And all in all, it’s not a bad film to go out on. Long-time Leon Schuster fans will be pleased, newcomers may not understand all the fuss.