Straight out of the baked brainchild of Seth Rogan, Sausage Party, an R-rated animation, is sure to change your view on food. Kristen Wiig, Johan Hill, Michael Cera and Bill Hader join the voice talents for this below-the-belt comedy cartoon. 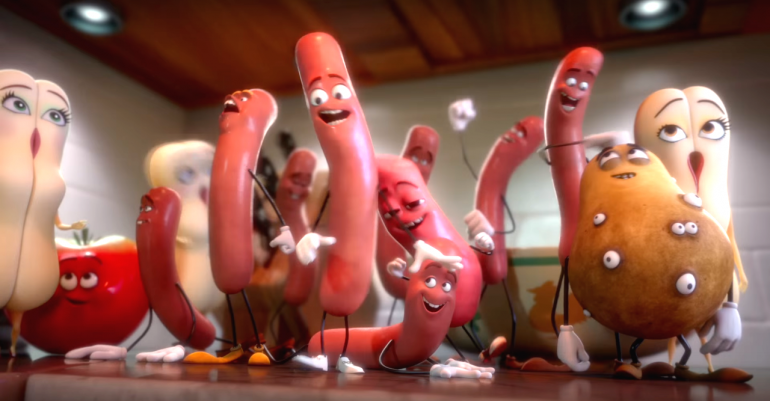 All the food in Shopwells’ store are excited to be chosen by the gods (us humans) to move on to the great beyond (beyond the store’s electric door). After a tragic aisle cleanup, Franky (Rogan) the sausage (so aptly named) goes on a mission to find out the truth about where foods go when they leave the store.

After his two best friends Barry (Cera) and Carl (Hill) get chosen, Franky calls together a small group of characters (which includes His girlfriend Brenda Bunson) to go on a journey to find out from Firewater (Hader) and the other non-perishables what really happens in the great beyond.

Sausage Party is a movie with way too many sexual references using food. I now can’t seem to face a hot dog anytime soon. It also has a lot of religious (which is the subtle yet majorly obvious metaphor of this film), political and racial jabs that’s bound to make anyone feel slightly uncomfortable.

Rogan seems to push every sensitive society button through this animation, which some might find hilarious and others might find utterly offensive. Sausage Party is the kind of movie you could watch while scrolling through your Facebook feed, because it has very few highlights and a lot of unnecessary scenes. However, I’d recommend it to any group of friends who enjoy under-handed jokes looking for a laugh.