A Look Back At Santa Claus Conquers The Martians When Mel Brooks came up with The Producers he told the wonderful idea of a production in the 1960s so intentionally bad it could be a tax dodge, and the characters found the worst script ever to adapt into a show: Springtime For Hitler. How they chose that over Santa Claus Conquers The Martians is anybody’s guess. However, if you’re looking a cult Christmas film this year that offers nothing of value, this film’s got it all! It seems the kids on Mars are acting moody, doing nothing all day but watching TV and not talking to their parents. So basically they’re just like most kids are, and are just one small step away from wearing hoodies. Rather than letting this happen, the Martian parents are advised to head to Earth and kidnap Santa Clause, so that he can spread joy to the little tykes by sticking things in their stockings as they sit on his knee. After kidnapping a couple of human brats to get directions, they rocket to Santa’s workshop to abduct Old Mr Jolly himself.

Their plan seems to be a success, and before you know it Santa is setting up his child-labour sweatshop on Mars to make toys for the local kids. Unfortunately (depending on your point of view) big baddie Voldar and his henchmen want to put a stop to it because… well, they’re just bad people. They mistake Santa’s moronic Martian assistant Dropo for Santa and take him prisoner, but before you know it there’s a non-fight in the toy factory and Voldar is defeated by little more than good vibes, Christmas cheer and an army of toy soldiers which do nothing.

Dropo gets the job as Martian Santa so the real deal can head back to Earth, the kids of Mars have been successfully cured of becoming whiny emo millennials, and the film ends off with the worst karaoke song ever conceived. And yes, they do expect you to sing it with them.

Amazingly, Santa Claus Conquers The Martians has some merits to it. It’s so bad it’s funny, although only just. The characters have, um, cleverly constructed names (Bomar – Boy Martian; Girmar – Girl Martian; Momar – Mom Martian… subtle or what?) and some dialogue so laughably awful it’s like Ed Wood exploded in a cheese factory. Given the right mood, the right amount of liquor, or the right mind-altering substance, this film is even pretty tolerable and at times it’s brilliantly bad.

The acting is dismal all around. The story is dreadful. The kids are a perfect advert for never having any kids at all. The sets, costumes and props make old BBC sci-fi productions look like Avatar. The music is the best that $3 can buy. And as for Santa… he’s weirdly creepy, terrifyingly disturbing, and looks like he should be on some sort of government list.

Also, and this is possibly the most bizarre aspect of the whole thing, it was blatantly referenced in the animated Red Tornado/Christmas episode of Batman: The Brave And The Bold. So it’s got some serious cult appeal to some people.

Like it or loathe it, that’s up to you. But whatever you do, don’t assume that it’s a quality film. Santa Claus Conquers The Martians is just quality B. 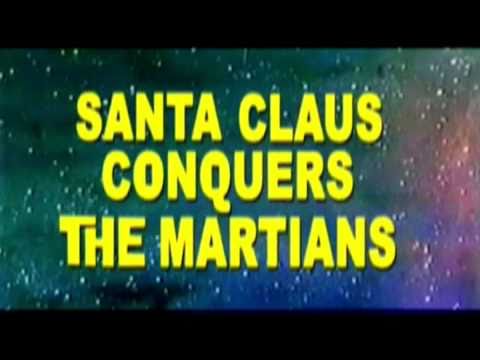