Disaster is everywhere. Cities along the San Andreas fault line are ripped apart by earthquakes unlike any we have seen before. Ironically, from the boulders and debris, The Rock stands tall as he searches for his family amongst the aftermath of the earthquakes. San Andreas is a “what you see is what you get” type of film and that does not mean that the script is poor. It is just destined to suffer because of the genre it fits into. We are dealing with a natural disaster movie, so there will not be any twists and surprises.

A group of seismologists have developed a way of predicting earthquakes. However, their discovery was made far too late as they find themselves in the middle of a series of earthquakes. Dwayne “The Rock” Johnson plays Ray Gaines, a rescue helicopter pilot who is on a mission to find his family in their time of need. He has a troubled relationship with his ex-wife as they prepare for a divorce and having lost one daughter he cannot lose another.

The majority of the camera time is stolen by The Rock and Alexandra Daddario (Blake) as the director clearly wants to emphasise on just how much Blake means to Ray. Prepare to witness The Rock as he dodges the worst that Mother Nature has to offer. The Rock is convincing and plays the part well, given that the script was rather limited and did not leave him much to work with. He is the action hero of this generation and he proves that he knows how to make his action believable, even in the direst of situations. Alexandra Daddario’s also holds her own in this movie. She puts in a believable performance and absolutely hogs the camera with her youthful beauty.

San Andreas is your average popcorn movie; it is good to pass time, but it is no cinematic masterpiece. That said, the level of CGI is simply spectacular. We’ve become accustomed to seeing futuristic technologies being shown via green screen, but watching cities flood and skyscrapers crumble at this level of detail will leave you with a chill down your spine. Watch as Hoover Damn and the streets of Los Angeles and San-Francisco are shattered.

There are scenes dedicated to the films 3D presentation, but the majority of the film has no major 3D scenes. I would still recommend that you give this film a viewing and it might be better to do so at the actual cinema or Imax. The sound is great and each crack and thud is brought to life on the big screen. There are small things that can only be seen and appreciated on the big screen. Have your world shaken and go and watch this movie! 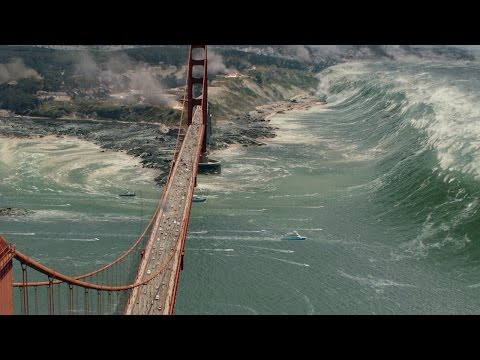