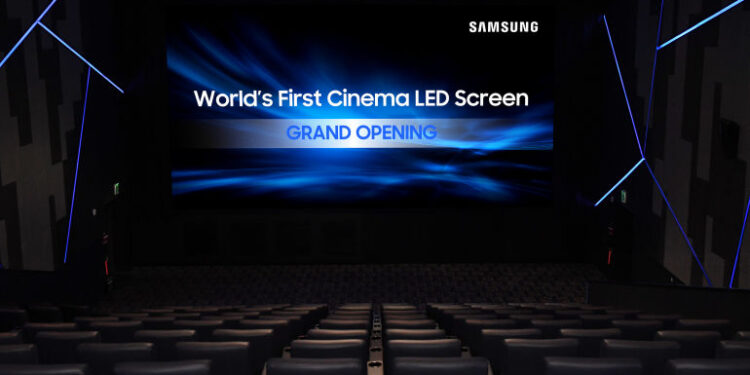 Over many years, Samsung has researched and manufactured appliances and devices for household consumption with great success. In recent times, however, South Korean electronics company has begun to expand their business outside of the consumer market (not simply printers, medical devices and air conditioners) with development in IoT, Unified Communication and, now, film. The company has developed a giant, 33-foot screen, nicknamed the Super S, designed specifically for movie theatres in mind. Samsung is a giant itself in the technology, specifically hardware, industry. The screen revealed is the world’s first-ever Cinema HDR LED screen, measuring a staggering 33.8 feet across. In addition, the display features a 4K resolution (4,096 x 2,160) and provides peak brightness levels up to 10 times of that offered by some of the leading projectors found in your average cinema. The image it provides is of superior compared to that of a projector, often times subject to the elements and some level of distortion. The screen while very bright, also has a “near infinite contrast ratio,” providing deep blacks coupled with very bright colours. (according to the official press release) The company revealed that it had been working on the Super S technology for quite some time now, having run numerous and vigorous testing during this period before making its commercial debut last week, having achieved full compliance with the Digital Cinema Initiatives theatre technology standards, and producing images of their own high benchmarks set. In addition to the new screen technology, Samsung also revealed a new, “state-of-the art sound system” with their partnership with JBL by Harman, with an aim to deliver “unparalleled sight and sound experience the way the content creators intended.” The Super S is currently available for live demo action at the Lotte World Tower location of Lotte Cinemas in South Korea. According to the reports, the first films that will be screened on the new Samsung screen will be Cars 3 and Spider-Man: Homecoming.