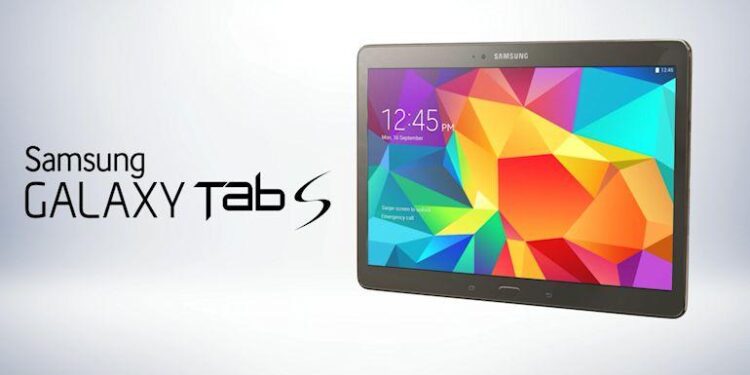 Over the past few years, Samsung has built up a huge following and reputation for their smartphone range. Although the Android OS isn’t entirely synonymous with the Galaxy S and Galaxy Note brands, for many, when choosing a smartphone, it is either an iPhone or Galaxy S/Note device. While Samsung has its own tablet division, its flagship in the form of the Galaxy Tab, it has had as much success in recently times as its smartphone counterparts. It’s no secret that the iPad still dominates this segment.

Samsung hopes to make more of an impression with its latest tablet, the Galaxy Tab S. Thankfully, this time around, Samsung has not held much back in terms of what it has to offer on the Tab S. The device comes in “Dazzling White” and “Titanium Bronze”. The Tab S still has a heavily plastic finish, but isn’t repulsive. Owners of the Galaxy S5 will be familiar with the build and design of the Tab S. In fact, a simple Photoshop resize would lead you to believe that two devices are quite similar, barring the positioning of the front home button and rear facing camera. Thankfully, the SGS5 design isn’t one to frown upon, and is rather pleasing for a tablet. The similarities start from the dimpled rear and the rounded ‘chrome’ edges, down to the oval-shaped corners and home button (with its built-in fingerprint reader).

While the previous versions of the Galaxy Tabs weren’t what you’d consider chunky, the Tab S is quite thin and light. To be more specific, the Tab S measures 247.3×177.3×6.6mm, while weighing just 465g. Compared to the iPad Air 2, it’s only 0.5mm thicker and 28g heavier, which is quite negligible. If you compare it to the previous gen Tab 4 10.1, which is 8mm thick and weighs 487g, while the weight difference is also insignificant, the thickness makes quite a big difference. The front-facing stereo speakers have been added and taken away on many of the previous tabs, but, thankfully, it is back once again on the Tab S, along with an IR emitter and microSD slot, all of which fit within the 6.6mm frame. Despite the 10.1” screen size on the Galaxy Tab 4, it had a rather dismal display with a 1280x800px resolution at 149ppi pixel density. This made for some rather stretched and choppy viewing, which is one of the worst transgressions to commit when designing a 10” tablet. The main reason for the decreased resolution on larger panels is as a direct result of overall building cost, which translates into higher costs for the consumer. Samsung has really paid attention to its areas of weakness in previous tablet builds (and with the reduction in display development costs) this time fitting a much more impressive 10.5” screen, with a 2560x1600px resolution, Super AMOLED display at 288ppi pixel density. While there are many tablets that offer great viewing experience with high-resolution displays, there is often the risk of faster battery drain as a result. Not only has the display increased in performance, it also has a much better optimised output, which minimises battery consumption. We’ll discuss battery life in more detail below.

In terms of the actual viewing experience, colours are vibrant and contrasts a really good. Whites are actually white, and blacks are black as well. What makes the viewing experience just that little bit better than before lies with the RGB sensor Samsung have included in the design. What this does is adjust the colour balance depending on the surroundings, as well as the actual image displayed. Furthermore, the screen sensor adapts the brightness of the display depending on the light levels, which is actually bright enough to view reasonably even in direct sunlight. As mentioned previously, the Galaxy Tab S sports some of the latest specs under the hood. This includes the Exynos 5 Octa 5420 chipset, which has a Quad-core 1.9GHz Cortex-A15 and Quad-core 1.3GHz Cortex-A7 CPUs, and Mali-T628 MP6 GPU, alongside 3GB RAM, 16/32GB internal storage, 8MP rear-facing camera (3264x2448px, autofocus, LED flash) and 2.1MP front-facing camera, and an impressive 7900mAh battery. The performance, then, is undoubtedly among the top five currently in the market, with even better battery life. Watching a movie on full brightness, with Wi-Fi turned on, ekes out an impressive 12-hour+ lifespan. Under more normal usage, the battery is easily capable of lasting more than two days between charges. Although the technology has been around for some time, the Exynos 5 Octa, optimises usage between the more powerful CPU for more process hungry tasks, with the lower-powered CPU used for background tasks, while being able to seamlessly switch between the two when needed. If you’re looking for a spec-filled tablet, there are many options available today that would take your fancy. This year, Samsung has joined the fold of coveted tablets with its latest version of the Galaxy Tab, the Galaxy Tab S. While it is more than capable of competing at hardware and performance level, the 10,5” screen and high-resolution display steals the show here. Viewing HD content is nothing short of amazing, and if you’re lucky enough to have any 2K movies, all the better. [If not, you can always take a gander at Samsung’s included promotional video, which takes you on a tour across the world’s different landscapes, while making you drool in the process].

The Samsung Galaxy Tab S is available at a cost of between R7,500 and R8,000, with many operator-specific deals between R350pm and R450pm, depending on the included package. This makes the Tab S a really good prospective buy for many this festive season, along with other titles such as ‘least breakable tablet’ for the year. Samsung has really cranked up its device portfolio this year, not merely churning out device after device content with its position at the top of the Android pile. A combination of the Note 4 and Tab S will make for a great Xmas stocking filling this year.