At their first Unpacked event of 2019, Samsung unveiled three new smartphones under the Galaxy S10 moniker, alongside the much-talked-about Galaxy Fold, which stole the show. For the first time in five iterations (with the launch of the Galaxy S5), Samsung launched a more affordable variant of their flagship S range smartphone. While the previous lower-powered, more affordable “Mini” range of smartphones had very little in common with their bigger and much more powerful sibling, the latest Galaxy S10e range is closely tied to the S10 and S10+, offering largely similar performances at a much more affordable price range. 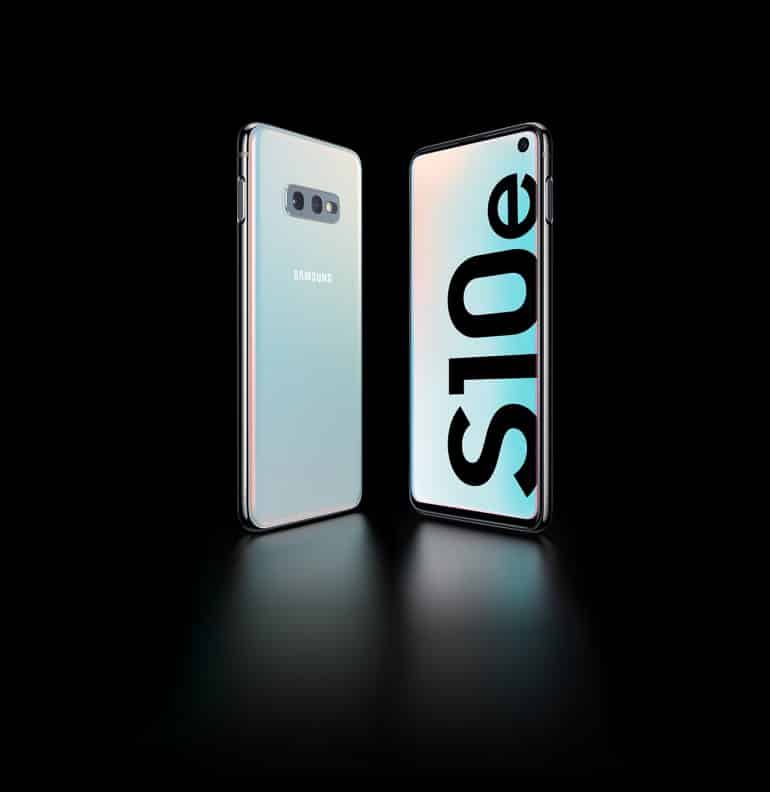 There’s no doubting that the unit was brought in to fend off similarly released smartphones as watered-down versions of larger flagships. But how does the Galaxy S10e stack up against similar competitors and, more interestingly, its bigger brothers?

You cannot escape the fact that the Galaxy S10e is a lot smaller and lighter than the larger S10 and S10+ units. It measures 142.2×69.9×7.9mm and weighs just 150g. That’s a saving of 7g and 25g, respectively. Samsung has been praised in recent years for its reduction in size and weight of its flagships thanks to their Infinity Display designs, etc., which makes it interesting that the Galaxy S10e is smaller and lighter than both premium smartphones in the range. It is worth noting at this point that the unit is significantly lighter than its main counterpart, the iPhone XR at 208g.

One of the other noticeable changes on the Galaxy S10e is that Samsung has removed the in-screen fingerprint sensor – to save on costs assumedly. Instead, the design team has increased the size of the power button, which now also doubles as the default security option with its built-in fingerprint sensor. While many have complained about the sluggishness and pressure concerns of Samsung’s in-screen sensor, there can be no such complaints with the power button. You can barely pay it much thought and your smartphone is unlocked after scanning your finger – most likely your thumb. Unlike previous models, however, you won’t get the heart-rate sensor built into the fingerprint sensor this time.

Samsung hasn’t skimped in terms of the build quality of the S10e, offering a fair amount of a chrome-inspired aluminium on the frame. This allows the S10e to keep its ‘premium’ tag, especially when compared to the XR again. The unit also comes in six variations of colours, four of which are available in South Africa – Prism Black, Prism White (pearlescent), Prism Blue, as well as Flamingo Pink. The rest of the design is an almost like for like comparison to the other models, featuring a 3.5mm jack, USB Type-C port and speaker grille at the bottom, volume rocker and Bixby key on the left, power button on the right, as well as the SIM and micro-SD tray on the top. Having used some of Samsung’s larger smartphones as my daily driver in recent years, ranging from the S8 to the Note 9, I found the 5.8″ Dynamic AMOLED screen bolted onto the S10e quite small. This is an indication both of how much the world has progressed since the first Galaxy S with its 4″ screen, as well as how well Samsung has done to make the 6″ smartphone feel normal in hand with its edge-to-edge, bezel-free panels. That said, after getting used to its size again, I found it almost perfect.

Unlike the S10 and S10+, both of which has the same resolution, the S10e has a lower resolution of 1080x2280px with a 438ppi pixel density. It may be down on size, resolution and pixel density but the screen is still one of Samsung’s finest, able to compete with other flagships outside of the Samsung range. Without being overly facetious about it, I’m fairly confident the S10e will give the likes of the Apple iPhone XS Max a run for its money. Colours are bright and the image quality is crisp. Just beautiful to look at. As with the other models, you can also adjust the colour balance if it’s a bit too warm and bold for your liking but you’ll still get the full effect.

There are a few differences on the Galaxy S10e compared to the S10 and S10+. The first of these is that the unit sports only a single front-facing camera, making the cut-out all that more minimal. As such, it blends much better with the various Samsung vetted wallpapers. The second major difference is the screen protection, for which the S10e sports Corning Gorilla Glass 5 protection on both the front and rear of the device. This isn’t a big concern, however, as the technology is still capable of provided fairly solid screen protection when dropped at reasonable heights, as it’s the same fitted to the Galaxy S9, S9+ and Note 9 smartphones. Lastly, while the S10e has a slightly curved edge on the screen, it doesn’t meet the same tapered edge as the other models. This gives it a more standard, squared approach, but still feels good in hand regardless. As a result of this, you also remove some of the accidental palm touches as observed on the S10+. 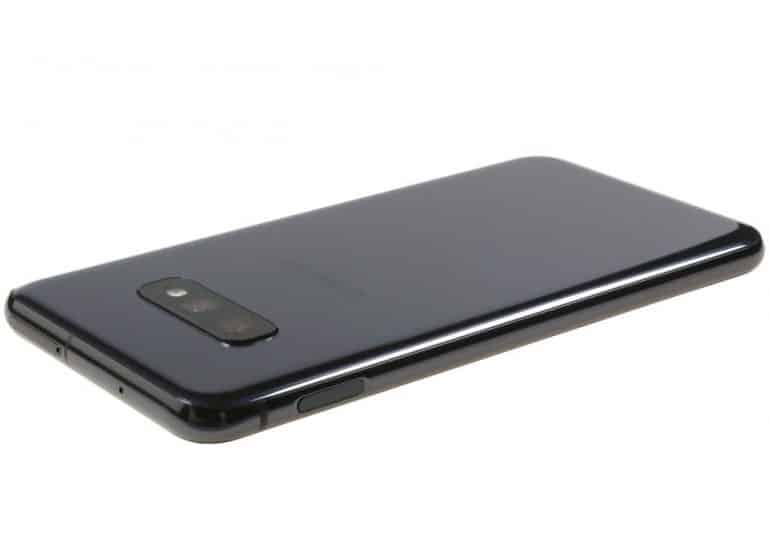 There have been a few surprises already with the various components of the S10e but none as surprising as the internal hardware specifications. For all the cost-saving techniques Samsung employed to make the unit more affordable to more prospective buyers, the company has fitted the same chipset as that on the S10 and S10+ versions. That’s the same Exynos 9820 chipset with its Octa-core processor, with x2 2.73GHz Mongoose M4, x2 2.31GHz Cortex-A75 and 4×1.95 GHz Cortex-A55 CPUs. It also sports the same Mali-G76 MP12 GPU to bring the same level of quality to your mobile gaming experiences. There are two variants of the internal storage and memory – 256GB with 8GB RAM and 128GB with 6GB, the latter of which we received for review. With less processing required for the reduced resolution, the overall performance is great. Playing around with a few games, the S10e handled games like Fortnite, Asphalt and Real Racing 3 on maximum graphics. Where the unit does take a bit of a hit is prolonged gameplay, as it was prone to overheating, more so that the larger models. My assumption is that due to the lack of a similarly-sized heatsink and cramped internals.

Compared to the larger S10+, the S10e lacks about 1,000mAh of battery capacity, with its 3,100mAh non-removable battery. Yes, it doesn’t quite match up to the same performance levels but I was just as impressive with the longevity of the battery life as on the other units. The S10e was easily able to make it through an entire day on a single charge with the same usage as on my S10+. It won’t last into the next day, however, but it’s more than most other units on the market. With its 15W fast-charging, you’ll be good to go in less time than both the other units, which is a small plus point.

Samsung hasn’t removed some of the more impressive features on the S10e, such as the reverse charging, Wireless PowerShare. You can power your Galaxy Buds, or any other wireless charge supporting the device you choose. 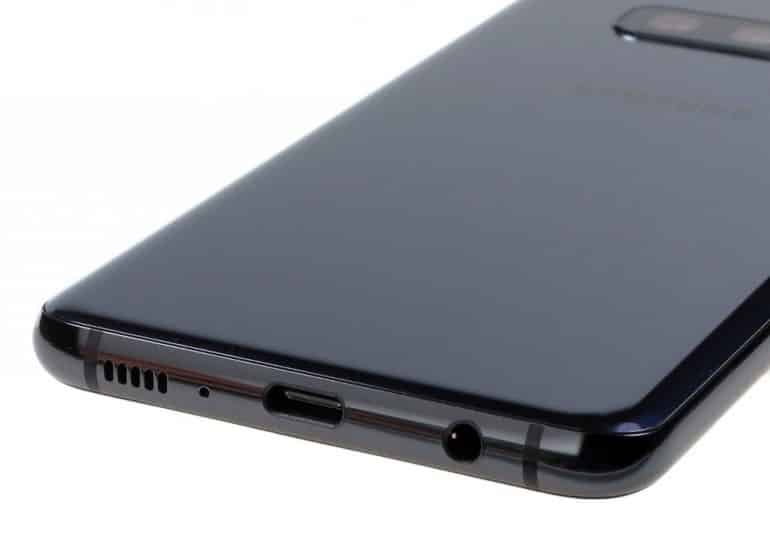 Another of the great aspects of the S10e is the same software experience. With the device sporting Android 9 Pie, along with Samsung’s One UI ecosystem there’s a lot to love about the overall experience. What Samsung has also done well since receiving the S10e for review are the continued updates and patches. As with the more premium devices, Samsung has released its AI under the hood to optimise the performance. Having set this up on the S10+ and noticed some good results (such as Bixby routines), the same can also be observed on the S10e. The unit is also rumoured to be among the first Samsung devices to receive the upcoming Android Q update when available later this year, even though it may take a few months for Samsung to start rolling out the official firmware.

Unlike the other models, the S10e only offers a dual-lens camera setup on the rear. I say “only” but the setup is more than impressive enough, even if you’re keen on taking photos at every turn for your social media feed. The two cameras are the 12MP, which has a feature set of f/1.5-2.4, 26mm (wide), 1/2.55″, 1.4µm, Dual Pixel PDAF and OIS, and a second camera with 16MP, f/2.2, 12mm (ultrawide) and 1.0µm. The missing camera in the setup is the 2x optical zoom lens, which has also been removed from the camera app. Choosing between which of the three cameras on the S10 and S10+ to remove from the S10e, the zoom lens may be the best bet, as the ultrawide shots are more useful at the end of the day.

Compared against the S10, S10+ and other flagship devices, the S10e is more than capable of standing its ground against all those mentioned. Photos in good lighting, both indoor and outdoor, are extremely good. In fact, I can easily suggest that it beats most of its non-Samsung competition. The only undoing of the S10e camera is its low-light photography. It’s not to say it’s bad but it doesn’t quite match up to the other leading units. With its ultrawide lens, however, it does more than makeup for this small decline in the head-to-head comparison. As mentioned earlier about the AI, it also filters down to the camera app, with suggestions like which angle would yield the best photo, as well as adjusting the scene based on the subject matter. To my surprise, it’s even able to detect some rather odd scenes such as sneakers, grass and the likes. The camera AI is also built around Bixby Vision, which provides additional information for images you take, such as taking a photo of a bottle of wine and then getting all the details of said wine, as well as the price and where to purchase a bottle. There’s also the announced Instagram tie-in directly from the camera app with all the filters to boot.

When I started my review of the Samsung Galaxy S10e smartphone, I was expecting something of a watered-down variant of the more premium S10 smartphones, as we’ve seen in previous Galaxy S ranges, as well as with its competitors. That wasn’t the case here. The S10e was more than able to hold its own across almost all the categories. What I found most interesting during the review of the S10e is that, while Samsung may have developed the unit to ward off the higher-end, mid-range units – most likely the Apple iPhone XR – which should offer great performance with more value for your buck, the company may have created a smartphone that is able to compete with its own premium smartphones in the form of the S10 and S10+.