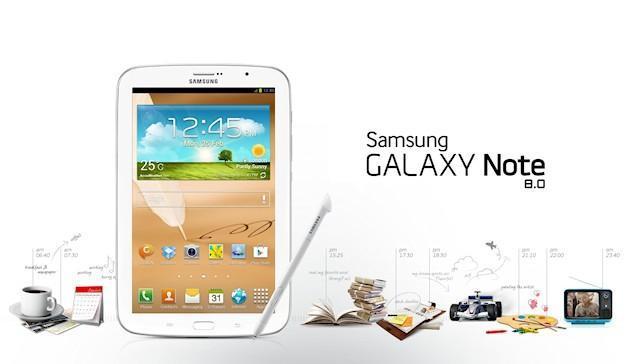 Samsung has released quite a number of smartphone-type devices since the launch of its first smartphone, the Samsung Jet. The Galaxy Note range has also been stretched to accommodate three different variants, the latest of which being the Samsung Galaxy Note 8.0. The biggest challenge for the 8” tablet is that it’s priced higher than the 7.9” iPad mini, and much higher than popular 7” Nexus 7. In its defence, the Note 8.0 has quite a few tricks up its sleeve that the other two don’t offer. The Galaxy Note 8.0 doesn’t venture too far from the long list of Galaxy devices in terms of its design. In fact, the same thoughts of “Samsung should have done better with its build quality” come to mind. The smooth, plastic finish doesn’t give you the impression of a premium looking/feeling design. The Note 8.0 on occasion feels worse in your hand than most of the other devices in the line-up, and even the non-removable cover feels removable. The tablet has an irregular layout with seemingly wasted space surrounding the screen, making it look rather awkward. Despite its lack of build quality, the Note 8.0 is both light, at 338g, and thin, at 8mm. Although you may struggle to fully grip the device in one hand due to its size if you have small hands, it is quite possible to position it comfortably on your palm for long periods at a time. The front of the tablet houses a light sensor and 1.3MP camera on the top, and two capacitive and physical home button on the bottom, which is pretty standard. On the right-hand side you have the power button and volume buttons, which are positioned too close together for ease of use. Below these buttons, Samsung has included an IR port, which allows you to use the tablet as a remote via the Watch On app. The left-hand side of the unit is largely empty, accept for the SIM and SD card slots. On the bottom, Samsung has opted for the more standard micro-USB port for charging. The dual speaker setup is also position at the bottom, which makes for skewed sound quality when using the tablet in landscape mode. The S-Pen is comfortably nestles on the bottom left corner. The back is also relatively empty, with only the 5MP rear camera housed there without any flash. Overall, although the layout is standard enough, due to its large size, there are often hindrances when in use; accidentally pressing the back button while gaming and sliding your fingers across the screen when taking photos for example.

Despite the impressive line-up of features included with the Note 10.1, Samsung failed to deliver a quality end-product for consumers. The Note 8.0 is a more polished version of its larger-screened brother, and with 6 months to improve, does exactly that. The device ships with Android 4.1.2 Jelly Bean and the latest version of the TouchWiz UI. The multi-window feature has been improved, not only by adding additional apps to use in this mode, but a more integrated finish and resizable windows. S Note and the AirView feature have also seen improvements, while you’re able to use the stylus with more apps, and even while entering words in general text fields. The Note 8.0 sports a 1.6GHz Quad-Core Exynos CPU, Mali-400MP GPU, 2GB RAM, 16 or 32GB internal storage, and a non-removable, Li-Ion 4600mAh battery. The 8” screen has a 1,280x800px resolution, which has a pixel density of 189ppi, compared to the iPad Mini’s 163ppi. Unfortunately, it’s not AMOLED, or even HD for that matter. The Galaxy Note 8.0 also have the capabilities of making phone calls, which although useful, is rather uncomfortable to use and even weirder to look at. Using the S-Pen to write, compared to typing on the software keyboard, is much easier and error-free. Making the transition, however, takes some time, which pays off in the end. The S-Pen also provides some shortcuts to simply using it for typing and touching, which includes taking snapshots and opening apps from the pop-up menu.

The overall performance of the Note 8.0 is more than sufficient for normal tasks, multitasking and even drawing. When it comes to gaming, however, the GPU doesn’t quite live up to the standard of its crisp and colourful display, which is a sad end to something far more promising. Although there aren’t any noticeable frame skips or lag, 3D rendered games look washed as opposed to those of 2D rendered games. That being said, the Note 8.0 was never intended as a mobile gaming rig, but rather a business-driven (and sketching) tablet. I found the battery life of the Galaxy Note 8.0 to be more than satisfactory, lasting up to 4 days of usage on occasion. Bear in mind though that longer battery life is as a result of switching off many of the unnecessary eye-tracking features. The tablet is meant to be used as one of three forms, a creative tool for sketching and drawing, multi-tasking business tool, or simply a source of entertainment including lying back and having a read. In a way, it succeeds in all facets, although only a portion of its entertainment value. With prices starting from R7,200, it isn’t the most affordable tablet available by any stretch. The Galaxy Note 8.0 is Samsung’s best tablet currently available, in terms of its usefulness. With its beautiful screen (even while lacking HD), performance to match and an S-Pen thrown in for good measure, you’d be hard-pressed to argue against it. If you’re looking for bargain units, then Nexus 7 and iPad Mini are suitable alternatives, although not offering the same level of productivity with the packaged features, and an integrated stylus for handwriting emails and drawing a few sketches.

If you already own a Note, Note II, Note 10.1, Tab 7.7, or the Tab 2 10.1, then it may not have the same appeal. The tablet market at a whole, however, is seen more as an easy-to-use device for browsing while in front of your TV, as opposed to getting actual work done during the course of the day. If you fall within the latter sample space, and can ignore its aesthetics and build quality, then the Galaxy Note 8.0 is definitely worth a look.