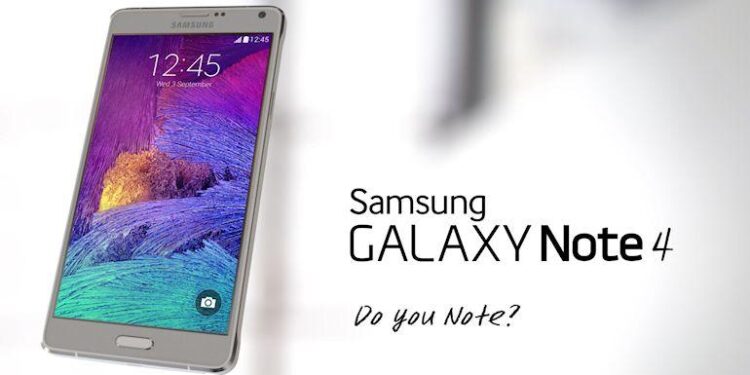 While brief, the history of the Phablet is one that Samsung has dominated. Initially, Phablets were considered as mobile devices with larger than average screen sizes, which, at the time, consisted of devices over the 4” mark. It wasn’t until the release of the original Galaxy Note (5.3”) that the world stopped and took notice. Strangely enough, there were 3 other Phablets released prior to the Galaxy Note, all in 2011, all of which failed, mainly due to low-resolution displays, out-dated operating systems, and lack of performance. The Galaxy Note received negative forecasts as a result, but succeeded in these 3 key areas. The addition of the stylus also contributed to the positive reviews, and within 2 months, Samsung announced it had sold a record breaking 1 million units.

Three years down the line, Samsung is now on its fourth instalment of the Phablet, the Galaxy Note 4. Samsung’s latest flagship has an abundance market-leading specifications, as well as a number of device-specific (S-Pen) software. With Apple’s entry into the Phablet market with the 5.5” iPhone 6 Plus, Samsung has even more competition nipping at their heels. While Samsung has always been criticised for its plastic designs, the previous Note devices were always just that little better than its other smartphones, also including faux leather on the Samsung Galaxy Note 3. The SGN4 has an aesthetically pleasing design, from whichever angle you’re looking at. This continues Samsung’s break from the previous run of fully polycarbonate devices, as with the Galaxy Alpha, released just a few months ago. The rounded, rectangle frame now has silver aluminium edges where the sides meet the front and rear of the device. The remainder of the frame is still polycarbonate, which have more of a metallic feel thanks to the aluminium accents. Samsung also rid the SGN4 of the faux leather removable cover in exchange for some more polycarbonate, although with a similarly leather finish. Without holding the device in hand yourself, it’s hard to understand how a smidgen of correctly placed aluminium strips can make such a big difference, but it does. The Note has never looked, or felt, more premium than with the SGN4.

For a more technical round-up, the SGN4 is 2.3mm taller, 0.6mm narrower, and 0.2mm thicker, while being 8g heavier than the SGN3. Fret not, though, these extra millimetres and bulk are put to great use in the SGN4, which we’ll discuss in more detail under the performance section. Truth be told, unless you’re comparing the two units side by side, the majority of users would not pick up these slight differences. The SGN4 has the trademark home button, which doubles as a fingerprint scanner with PayPal cerficiation, below the screen on the front, flanked by the two capacitive buttons, the left for recent app activity and the right a back button. Above the screen you’ll find an LED indicator on the left, which is actually only really visible when displaying a notification, two proximity sensors to the right of the centralised earpiece, and a 3.7MP camera on the far right. The left and right sides are largely empty, broken only by the volume rocker on the left, and the power button on the right. These two buttons are also aluminium based, adding to the premium metallic look. The top of the device has a 3.5mm jack on the left, with an IR blaster on the right. The microUSB port is centred at the bottom, with the S Pen holster to the right of it. The rear removable cover sports the silver Samsung logo in the top third, below the 16MP rear facing camera. Slightly below the camera you’ll find the built-in heart rate monitor next to the LED flash. Closer to the bottom you’ll find the loudspeaker, which has a slightly raised strip to keep the device from resting flush on a solid surface that may drown out the rear projecting sound.

While more and more users prefer the fully-framed, single-piece aluminium devices such as the those from other big players, Sony, HTC and LG, it is worth pointing out that not many of their devices provide the option of a removable cover in which users are able to swap out secondary batteries, or replacing the old battery without the need for specialised equipment or having to pop into your local smartphone repair store to have done. The SGN4 offers the best of both worlds, somewhat, allowing users the freedom to change batteries, while still having a solid, premium looking device in their hands. If you’re quick to judge, you will notice that the SGN4 has the same sized 5.7” screen as on the SGN3. Delving into more detail, the display has received a great bump from the 1080p HD resolution, to a, more resounding, 2,650×1,440px Quad HD AMOLED display, which has a pixel density of 515ppi. During the review period, I spent a lot of time finding the best quality images and video to view on the impressive display, which held up brilliantly under all situations and media. Colours are bright, contrasts are good, and quality is clearer than I had initially expected from the offset of the tests. The display outshines anything I’ve previously reviewed, so I spent some time researching some display comparisons between leading device displays. As it turns out, while the SGN4 is one of the best, if not the best, currently on the market, many point out that it won’t be noticeable to the majority of users over the LG G3’s display. That said, you won’t find anyone complaining about the results on the SGN4.

I could spend hours watching videos and browsing through HD images on the SGN4. Landscape videos has now become something I’ve become accustomed to over the two weeks since receiving the SGN4. Unfortunately, the same cannot be said about the image quality on most mobile games. Hardly any of the games I tinkered with on the device matched the quality capable on the SGN4, and appeared as upscaled 1080p for the most. While it did not look bad by any means, I would have loved to put the unit through its paces on a few games with high-resolution graphics outputs. As has been the case in all previous editions of the Note, the SGN4 sports some of the latest hardware specifications in the business. Starting with the processing power, the Octo-Core, Exynos 5433 chipset includes a Quad-core 1.3GHz Cortex-A53 and Quad-core 1.9GHz Cortex-A57. Other important hardware under the hood include a Mali-T760 GPU, 3220mAh Li-Ion battery, 32GB internal storage (with support up to 128GB microSD), 3GB RAM, and 16MP rear camera. With such impressive stats, you would think that the SGN4 has most corners covered in terms of overall performance…and you’ll be right. Performance is nothing short of impressive under most, if not all, conditions. Animations jitteriness, camera lag, and slow loading times on apps are all things of the past. Not once did any of these issues crop up during testing. The only issues I came across was Force Close errors on a few games, which, often aren’t as a result of the device hardware.

While the SGN4 was initially aimed at the businessman always on the go, who needed access to his data via their mobile, while at the same time being able to manipulate and edit different files, this pattern has changed of late. Even though the SGN4 is still fully capable of meeting the above requirements, the enhanced display and more than adequate camera has meant that the device has evolved to meeting the requirements of the average man on the street, as well as the avid selfie user. Keeping that in mind, the battery life plays an important role with a unit like this, and nothing short of lasting a full day on a single charge, while under heavy usage, was obligatory. The SGN4 delivers with flying colours on this front. Not only is it able to last a full day under normal working conditions, I was also able to throw in a few game runs in between. If you do manage to deplete the rather large battery life of the SGN4, Samsung has added a feature that won’t leave you stranded waiting for your device to recharge to an acceptable level. The included, fast-acting charger is able to charge up to 50% within 30 minutes. While charging the unit to 100% takes much longer than an additional 30 minutes, the fast-charging operations does more than enough to get you going as quick as possible. I don’t often create a separate section for discussing the camera of smartphones, unless, of course, it is one of the standout features, or the device’s marketing point. The SGN4 boasts a 16MP rear camera, which, for the most part, is the same as that fitted on the Galaxy S5 released earlier this year. The biggest difference between the two, then, is the added Optical Image Stabilisation. Although not overwhelming, and not something new by any means, it does make enough of a change over the SGS5’s camera in achieving near-perfect snaps without too much fuss in terms of keeping your hands steady. As with the SGS5, however, the SGN4’s camera doesn’t hold up very well under lower light conditions.

If you’re still waiting to read something interesting about the camera, you won’t find much to write about for the rear-facing unit. Interestingly enough, it’s the front-facing camera that provides most of the new gimmicks and features. The 3.7MP camera is perfect for taking selfies, and even has an option to take a wide-angle shot for a wefie (or groufie). This feature is optional from the camera app under Mode settings, and works similar to how you would take a landscape image using the panorama option. Samsung has touted this feature in many ads since the launch, and isn’t ashamed to pull the odd marketing stunt here and there as well. There are also a few triggers put in place to take the selfie by means of a simple thumb click and the likes. Users can setup the camera app to trigger a snap by means of the volume rocker, heart-rate sensor on the rear, or by automatically detecting a smile from all participants in the image. The past two weeks with the Samsung Galaxy Note 4 has flown by. During this short time, I have thoroughly enjoyed reviewing it. At the same time, showing off the unit to anyone who spotted me using it, also managed to pique their interest and bring about a sudden urge to replace their current phones with the SGN4. Throughout the last three years I spent reviewing smartphones on FoS, I have yet to witness a device demanding such instant respect, even from the likes of non-Android, non-Samsung users.

If you point to any one feature of the SGN4, it stands out in its own right as a market leader. Samsung has brought all these specifications together into a device that not only has some of the best hardware available, also looks the part. If you had asked me just two weeks ago what my next device would be (on available contract upgrades), it would have been a choice between three other smartphones. As it stands today, the list only contains one.