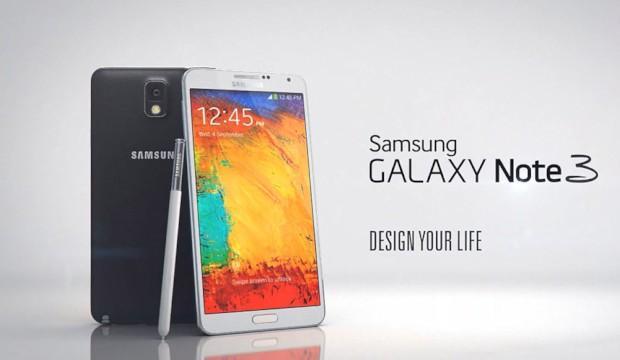 Samsung has dominated the Android market in recent time, and, as with the Galaxy S range, the company has released an annual update to their Galaxy Note range. This year saw the unveiling of the Samsung Galaxy Note 3, which was accompanied by the company’s first smartwatch, compatible with other Galaxy smartphones. Since its initial launch, the Note has seen an increase in screen size, now at a whopping 5.7”. But is the Note 3 simply an oversized Galaxy S4 with a stylus, or is it worth the additional cost for all the included extras? While the Samsung Galaxy Note 2 was branded as the premium smartphone in Samsung’s extended range, there were some design features that wouldn’t suggest it. The company, thus, swapped out the old plastic rear (we’ve come accustomed to) with a leather rear cover, albeit faux leather. The Note 3 also sees a return of a more rectangular shape, resembling both the original Note and the Galaxy S4. Similarly to the Galaxy S4, the Note 3 has a chromed plastic border, and pretty much every other design feature apart from the rear cover.

Sticking to the trend, the Note 3 has an increased screen size, bumped up to 5.7” from 5.5”. Thankfully, this doesn’t mean that the overall size of the device has changed much. In fact, the Note 3 is lighter (168g), thinner and narrower (width) than the Note 2, and only 0.1mm longer in length. The Super AMOLED capacitive touchscreen has a 1080x1920px resolution display at 386ppi, which has a smaller bezel around the edges. Unlike the Note 2 (267ppi), which had the same resolution as the original (285ppi), even with its bigger screen, the Note 3’s HD display is crisper to view, with added vibrancy in its colours and contrasts between light and dark. The Note 3 isn’t all about the 5.7” display though. The Note lineage has always been known for its premium specs with one of the fastest processors in the Android market. The Note 3 is no different. As with the Galaxy S4, the Note 3 comes in different variants for the 3G and LTE models. The former has an Exynos 5 Octa chipset, which has a Quad-core 1.9GHz Cortex-A15 and Quad-core 1.3GHz Cortex-A7 dual CPU and Mali-T628 MP6 GPU. The LTE version, however, has a Qualcomm Snapdragon 800 chipset with a Quad-core 2.3GHz Krait 400 CPU and Adreno 330 GPU. Most of the remaining specs are standard across the versions, sporting 3GB of RAM, 16/32/64GB internal storage, microSD, microUSB, NFC and 13MP 4128x3096px rear-facing camera. Having set the benchmark for battery life with previous models, the Note 3 packs a 3200mAh battery. Removing the faux leather rear cover reveals metal contacts for wireless/induction charging, which requires a different cover.

This may just seem as numbers to many, but the Note 3 provides more punch than is required for any smartphone, and has enough processing prowess to be a proficient desktop PC. Thus, you shouldn’t expect anything less than smooth transitions and a high-end performance. Samsung has always been known for their bloatware in the form of their TouchWiz UI atop of the Android OS. Thanks to the great performance of the Note’s hardware, this has never slowed down the performance as in many of Samsung’s other devices. The premium TouchWiz version for the Note 3 includes all the standard Samsung smartphone apps, as well as the S-pen-optimised features and apps. Some of these include Air Command, Action Memo, Scrapbook, S Finder, Pen Window, Multi-Window, and Direct Pen Input. Samsung has kept the tradition of adding more to each iteration of the Note, which may or may not be your cup of tea.

The S-Pen has also seen something of an update, most of which has been aesthetic, to match the faux leather book appearance of the device. The only other real change, besides in the looks department, the S-Pen can now be used on the capacitive back and menu buttons below the screen. When removing the pen from its holster, there is always an assumption that it is ready to be used, which means that a quick-option, circular menu pops up onscreen. The default shortcuts include Action Memo, Scrap Booker, Screen Write, S Finder and Pen Window. All-in-all, the S-Pen similar to that found on the Note 2. In this year’s announcement of the Galaxy Note 3, Samsung also announced the long-rumoured smartwatch, the Galaxy Gear. At the time of launch, the Note 3 was the only device that had support for the Gear, which has since been expanded to the Galaxy S4 and some variants of the S3. If you’re not the owner of any of the above-mentioned, the Galaxy Gear is pretty much useless; not even able to tell the time without pairing with any compatible smartphones first. Once paired and ready for use, the Gear is capable of a few functions, including receiving calls (only loudspeaker), S Voice, notifications and a memographer (used with the camera). The Gear also sports physical specs including 1.63” Super AMOLED 320x320px resolution display, 1.9MP BSI camera with auto focus and Sound & Shot capabilities, 4GB internal storage, 512MB RAM, and 315mAh battery, all powered by its 800MHz CPU. Some of the other third-party featured apps include Atooma, Banjo, Evernote, Glympse, eBay, Line, MyFitnessPal, Path, Pocket, RunKeeper, TripIt, and Vivino Wine Scanner. The Galaxy Note 3 is a worthy successor in the line of Notes gone before. Almost all aspects of the software and hardware of the device have been tweaked in one way or the other, which leaves you were a sense that Samsung is, indeed, spending time and resources on developing the range, much more than the Galaxy S range, it would seem. At R8,999 the Note 3 isn’t cheap, but there’s a whole more thrown into the mix over other smartphones in the same (or exceeding) the price bracket. There aren’t many choices in the ‘phablet’ range, but with a device as complete as the Note 3, for a market Samsung themselves created back in 2011, there isn’t much need for competition.

Unfortunately, the same cannot be said for the Galaxy Gear. The smartwatch remains a gimmick across all brands in its current state, doing little else than answering calls using a loudspeaker, with a few notifications thrown in for good measure. At R4,599, most prospective owners will purchase the Gear as an extra to the Galaxy Note 3 as part of some monthly contract, as the cost is not justifiable in its current form and functionality.