Samsung Galaxy A7 Review – Best Screen For Your Money 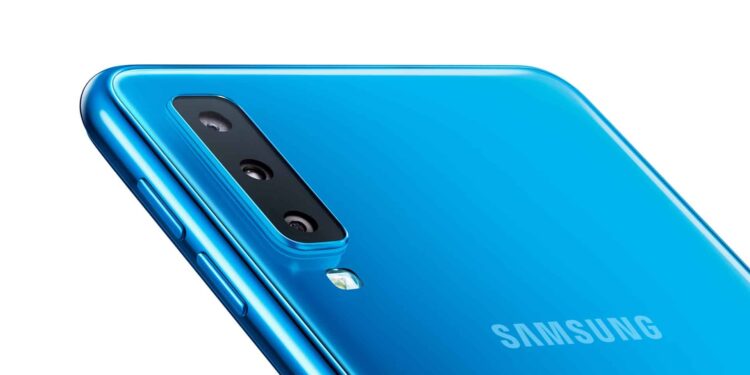 In the last quarter of 2018, Samsung announced its updated range of Galaxy A smartphones. The range falls between the Galaxy J and Galaxy S ranges, which are the entry-level and flagship ranges, respectively. Let’s review the Samsung Galaxy A7.

While the list of Galaxy A devices is categorised as mid-range units, there are a few aspects that are on par with their own flagship devices, such as the Super AMOLED screens, a triple camera, as well as running the same OS as the other 2018 flagships. These are key specifications to note, especially when you consider the copious amount of mid-range devices on the market from reputable brands such as Nokia, Honor, Huawei and Motorola.

Having received the Samsung Galaxy A7 for review, I was more than curious how well the unit would compare to the leading contenders and its own range of flagships.

At first glance, you’d easily mistake the Galaxy A7 for one of Samsung’s premium smartphones, with its glass front and rear. In fact, there are aspects of the design that just feel a lot better than the S9, a device which it is often compared given that they were both initially released in 2018. For starters, the Samsung Galaxy A7 is a full 1mm slimmer than the S9, which is impressive, even with the fact that it may not be sporting all the same specs and features under the hood. It may not be made of the lightweight aluminium as its superior counterpart, but its plastic frame still produces a reasonable 168g device, which falls within the average range of 160-170g for many other leading, mid-range devices. Another of nice-to-haves is the built-in fingerprint sensor on the power button. It may have a few shortcomings in that you can’t single click the power button to simply turn on the screen to view notifications from the lock screen but there are ways around it.

The Samsung Galaxy A7 features a two-button volume rocker, as opposed to the modern standard of a single button approach, which isn’t all that bad. All the buttons are placed on the right-hand side of the device, with the SIM and microSD card slot fitted on the left. This also means that there’s no Bixby key, which would please a few out there. There’s also a 3.5mm jack, which would please all the iPhone haters who love trolling this fact. Where the A7 does let me down quite a bit is the continued use of the microUSB charging port. Many of the other mid-range devices, especially those released in 2018, feature the almost ubiquitous USB Type-C port. There’s no excuse on this one, as many users are already in the process of getting back to a single cable environment after the switch from microUSB to Type-C.

If there’s one aspect about the Samsung Galaxy A7 that truly stands out head-and-shoulders above all its competitors, it’s definitely the screen. The unit packs a brilliant Super AMOLED panel, which measures 6″ and has a screen-to-body ratio of 74.4%. This doesn’t quite match up to the flagship devices with more than 80% screen-to-body ratios. This isn’t a big concern though, not here. The A7 still features quite a chunk of bezel compared to the other flagships, but nothing as large as many of the other mid-range units.

The screen has a 1080x2220px display with a 411ppi pixel density. It also offers great colour gamut and contrast for a device within its price range. There are four colour modes to choose from, based on user preference. Compared to the majority of LCD panels within the mid-range sector, the OLED screen isn’t as sharp. Where the OLED panel does have an advantage over the LCD panel, however, is with the always-on display. Unlike the LCD panel, which lights up the entire screen when turned on, the OLED has individually lit pixels, only lighting the ones required. This is also why the contrast is so great, while also being able to keep battery consumption to a minimum.

The technology, however, does come at a cost. Thankfully, Samsung is a leader in screen technology, even supplying the likes of Apple with its panels. This puts the company in a great position to offer a Super AMOLED panel on a mid-range smartphone and being able to absorb a lot of the cost. This is a great bonus for users on a budget. To round things off, the A7 also sports Corning’s Gorilla Glass protection, albeit an unspecified version.

Samsung Galaxy A7 Performance and Battery

When it comes to outright performance, the Samsung Galaxy A7 delivers a mixed bag of goods. Looking at the specifications, the unit has a solid enough base under the hood, but misses the killer blow to beat out its rivals. The A7 features an Octa-core, Exynos 14nm SoC, which has x2 2.2GHz Cortex-A73 CPUs and x6 1.6GHz Cortex-A53 CPUs. Also fitted to the SoC is a Mali-G71 GPU. The unit I received for review is the 64GB variants, which has 4GB RAM. There is a bigger, 128GB version, which has either 4GB or 6GB RAM depending on the model. Running on the same OS as the S9, Android 8.0 Oreo, the overall experience is reasonably good. It is worth pointing out that at release, Android 8.0 was an entire generation in Android OS behind where it should be.

The menus, screens and animations are all smooth enough that you don’t have to worry about any lag or jitter under normal usage. Where the unit does tend to struggle quite a bit lies in the dual-core GPU performances. For many games, there is a considerable lag when playing games that are graphics intensive, made worse when there aren’t any settings available to turn down the graphics. Many modern smartphones, even within the mid-range market, sport a quad-core GPU as a standard, which makes them roughly twice as powerful on average.

The Samsung Galaxy A7 sports a non-removable, Li-Po 3300mAh battery, which provides more than sufficient up-time to make it through the standard work day and just enough juice to power you until bedtime. Under heavier usage throughout the day, users should still expect to make it back home before needing to charge again, but there were one or two occasions when I would feel more at ease charging my device before leaving the office in the evenings. For the more power-conscious users, you could also easily make it until lunchtime on day two before needing to reach for the charging cable.

Samsung Galaxy A7 Software and Camera

As already mentioned, the Samsung Galaxy A7 comes pre-installed with the same Android 8.0 Oreo build as found on many of Samsung’s other flagships. For the most part, this is a good thing, as the company aims to offer more as a user experience than to omit features you’d like to see. On previous mid-range smartphones, Samsung didn’t offer users the Samsung Health, Voice Recorder and Microsoft apps, which are all available on the A7. This also means that the A7 has the same multitasking capabilities as the flagship devices. With the unit packing 4GB RAM, as much as the average laptop these days, it’s more than sufficient to get the job done. Switching tasks and apps is as easy as on any other device, with no lag in doing so. While I wasn’t able to upgrade to Android 9.0 Pie at the time of writing, the update cycle has already started seeding around the world and due to land in South Africa.

Samsung actually packed its first triple camera setup into the updated Galaxy A range. On the A7, the camera specifications are listed as a 24MP (f/1.7, 27mm (wide), PDAF), 8MP (f/2.4, 18mm ultrawide) and 5MP (f/2.2, depth sensor), which on paper make for pretty impressive specs. This configuration allows the A7 to offer advanced camera features such as ‘live focus’, shallow depth of field and ultra-wide shots to provide the user with a wide range of camera options for their liking. Unlike the more premium cameras, however, there is no optical zoom available, which means users have to make do with the digital zoom, which isn’t as great but at least gets the job done.

Snapping photos in sunlit conditions makes for some great imagery, with a colour-rich palette and great contrast. As with most of Samsung’s smartphone cameras, the company continues to add quite a lot of post-capture processing, which is notable in how the colours are boosted, along with the contrast. Users wouldn’t be able to add much in the way of their own editing as a result here, but the results are good enough. The camera also allows users to take stunning macro shots, supporting focus at around 6-7cm. In terms of the low-light images, the unit does a reasonable enough job here. Not great but not bad either.

When comparing the various shots using the different cameras, you’ll notice that the main, 24MP camera lacks the full detail that is picked up when using the 8MP ultra-wide lens. As a result, the images feel soft in comparison. This is a little troubling, especially considering that we’re comparing the 24MP to an 8MP, which should provide bags more detail in each shot. It is also interesting to note that the 24MP camera fitted is a Sony IMX576 sensor, which has performed well on many other cameras in the past. Samsung has bolted a 24MP (f/2.0, 26mm, wide) onto the front, which makes for rather good selfies. In contrast to the rear-facing 24MP camera, you may actually get some better results using the selfie camera in terms of overall sharpness and detail.

When it comes to the overall performance, the Samsung Galaxy A7 delivers a mixed bag of results. If you’re looking for a portable gaming device on a budget, you are best served looking elsewhere. If you wish to take great photographs, there are one or two devices that come to mind that will deliver better results. For everything else, however, the A7 has you covered. In fact, in terms of the screen, you won’t find a better panel on any other mid-range unit, which makes the unit perfect for watching videos and the likes.

If your mobile game of choice doesn’t require any hardcore computing, then the Samsung Galaxy A7 is a winner.

In a tough mid-range market, the Samsung Galaxy A7 stands out amongst the pack with its brilliant 6" screen that delivers quality imagery. If not for a few mixed results, it would stand atop of the pile without question.