Samsung DeX On The Galaxy Note 9 Review – It Just Works

Ever since the Samsung DeX (desktop experience) feature was added to the Galaxy S8 and S8+ smartphones in 2017, I’ve been eagerly following the progress of the technology.

When it was first launched alongside the S8 devices, DeX required the purchase of a separate DeX docking station, which was later upgraded to the DeX Pad for the Note 8 and Galaxy S9 launches. While the experience signalled Samsung’s intent on creating a duplicate experience from just one device, sales of the docking station and Pad was not met with great enthusiasm. But, with the launch of the Galaxy Note 9, and the native experience for DeX built into the phablet, Samsung may finally have progressed beyond the point of the gimmick, to something a lot more functional and usable in the long run. 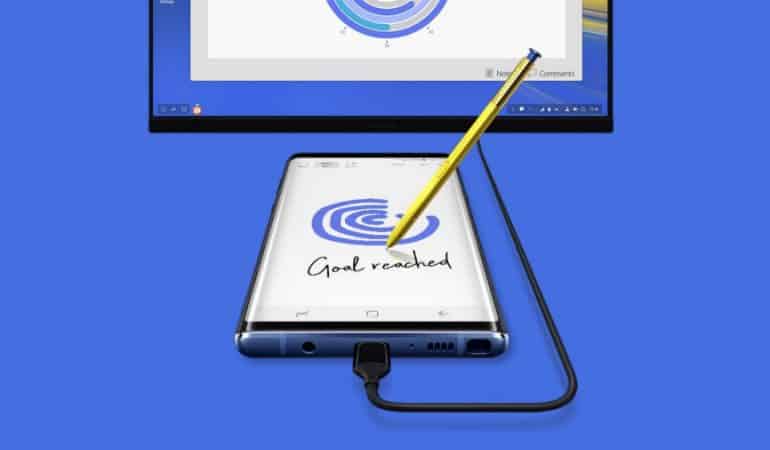 For those who have been following the smartphone scene when it became mainstream in 2009/2010, would know that the DeX mobile desktop experience isn’t the first of its kind. In 2012 I review the Motorola Atrix 4G, which was equipped with the powerful NVidia Tegra chipset to power the unit. Not only did the chipset offer superior GPU performances compared to its competitors in the early days, but it was also powerful enough to offer dual-boot functionality for the more advanced users.

The issue with the Atrix was similar to that of the previous iterations of DeX, in that it required the use of a docking station. The docking station Motorola offered was more of an all-in-one setup, which included a keyboard, USB ports, the dock, and even a built-in screen with a 960x540px resolution display – still acceptable by modern standards.

When it came to the specifications of the smartphone, the Atrix was top notch (no pun intended). It also priced similar to other flagships at the time. Where the sales really suffered was down to the 2.5x price point for the smartphone and laptop dock combo. And to spend anywhere near R10,000 on a smartphone and something resembling a laptop with half the functionality in 2012 in South Africa was just unheard of. And therein lie the issue with any such serious attempts for years to come. Even in 2017 and 2018, being expected to spend additional costs on a docking station to unlock the capabilities of the S8, Note 8 and S9 was maybe asking a little too much in the end.

Out With The Old

So when it came time for the announcement of the Note 9 on 9 August, I was greatly surprised by the upgrade of the platform, now built into the Note 9, and unlocked by means of a “simple” USB Type-C to HDMI cable. Yes, it’s that simple. For more eager tech enthusiasts, you may just have the cable lying around amongst the other unused cable clutter in your back room or garage. I know this because this is exactly me.

But, there’s a catch. If you’re using a generic or third-party cable, the experience is limited to a 720p desktop resolution, whereas any of the Samsung products, even the older docking stations, have a 1080p native experience. Samsung claims that this is due to the quality and support of the said cabling, which doesn’t cater for the full experience and leads to performance drops. Either way, we managed to get our hands on an official Samsung DeX cable for the review, which is the point of view from which we’ll be discussing today.

The first thing you’ll have to navigate is the setup. It isn’t that tough to complete. All that’s required was to plug in the HDMI to a supported screen, and then plug in the Type-C end into your Note 9 smartphone. The default setup is to have the screen duplication view, which is simply the portrait mode of the Note 9 home screen.

Switching to either of the DeX modes requires a small boot, which usually completes within 5 seconds, while still keeping your Note 9 powered. It’s a rather impressive turn of speed and requires no additional booting of the Note 9. Once you’ve removed the cable from the device, it is ready to continue being used for default functionality. This already signifies the ‘native’ experience of DeX over previous attempts, as it sets up functionality faster than Thanos could snap his fingers together to achieve his goal.

Even before getting into the full set of tests I had laid out for the DeX review, I was already a happy camper using it.

Apps that were sending notifications on the phone were represented on the DeX desktop, and could even be read, answered, or swiped away. Many of the more prominent apps available on the Google Play Store were duplicated on the desktop. This means that apps such as Gmail and WhatsApp, which receive continuous updates were available too, and I was able to reply to all from DeX.

The only difficulty I had to overcome here was the transition of using the onscreen keyboard by means of the touchpad experience on the Note 9’s screen. Thankfully, having installed SwiftKey and being accustomed to swipe texting, swiping to chat wasn’t all that foreign in the end. The use of the S Pen also comes in handy here for non-swipe keyboard users, as you can simply point and click to almost use the touchpad as a keyboard.

At this point, it is worth noting that a small investment in a Bluetooth keyboard and mouse combo may be quite useful, and with a cost of less than R200 for a generic set, it’s not all that much of an investment.

Another of the important questions that one has to ask when using the DeX mode is how long the battery would last, as well as the operating temperatures of the Note 9 device. I knew beforehand that the Note 9 had a pretty good battery life, easily able to last me a full day’s use on a single charge, right into the next morning. What I was surprised at was how little the DeX mode impacted the change in battery consumption.

For some reason, the experience lead me to explore whether the native DeX experience wasn’t in some kind of live standby mode – high availability mode for those engineers out there. Again, I knew beforehand that Samsung had increased their work when it comes to the cooling of the handset when in use thanks to Water Carbon Cooling System. What I wasn’t aware of previously was how well it could work, as it wasn’t noticeable during normal use. When in DeX mode, however, the device felt noticeably colder in hand, as if the cooling system was triggered, or put into overdrive. 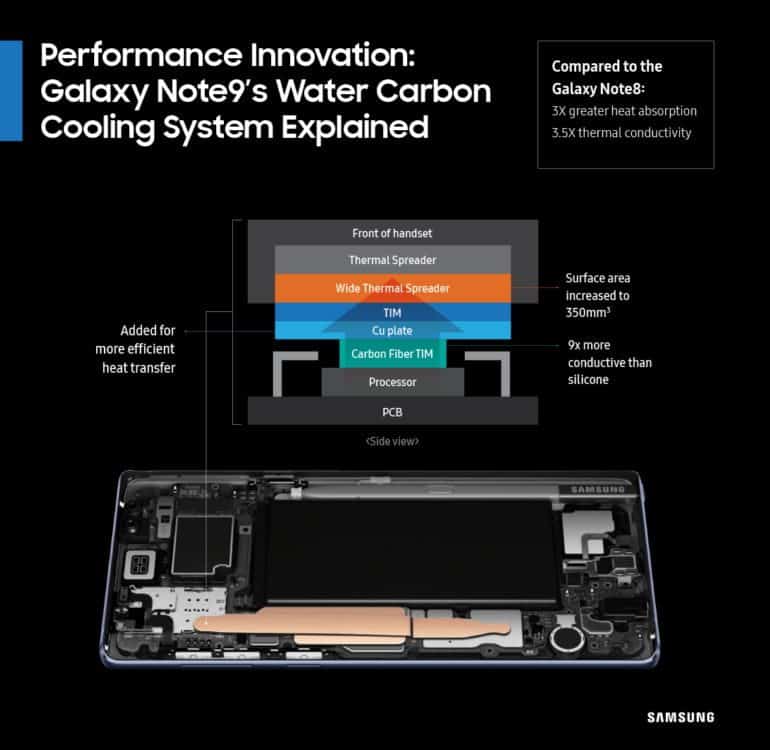 How Long Can It Last On A Single Charge?

When it came to the actual timing of the tests, I was, again, surprised at the results. After a few days of continuously running the DeX modes from the time I arrived at the office, the average duration was easily the extent of a day at my desk. These tests included standard work functionality such as word processing, browsing the web, and even a few additional apps such as WhatsApp. Turning the heat up a little, in more ways than one, would be the ultimate test. These tests included running a browser, downloading from the Play Store over WiFi, while also playing Fortnite in between the testing, and minimising only to continue the downloading process and the likes.

Battery life here averaged around the 3-hour mark, which is still good in all respects. Many laptops of today average around three to four hours on a single charge, so using a dual-mode portable desktop from your smartphone achieving the same result is nothing short of impressive.

As mentioned above, the tests conducted included browser tests, downloading, and even playing games in between it all. The results were precisely what one would have expected, having already completed the review of the device without the use of DeX. The DeX experience is simply an extension of the Note 9 experience, which is smooth, swift and crisp.

This makes usage under normal conditions a breeze as you’re working on editing Word documents, creating PowerPoint slides, and other such tasks. The cooling system kicks in and keeps things operating at a cool temperature throughout, only barely heating up at times, and is only really noted under heavy strain, but even still, not worrying.

My experience with the Samsung Galaxy Note 9 was already a winning one over the past 6 weeks or so and has only improved with the fully realised experience, which includes the Samsung DeX feature. In all honesty, while I was eager to make use of the functionality, and having quietly hoping for its return since I first laid hands on the Motorola Atrix 4G so many years ago, I was still blown away by the experience. Yes, there are still some ways to go until we can start to compare it to that of a fully functioning laptop replacement, but it’s already grown in leaps since it first appears just over 18 months ago on the Galaxy S8.

A lot of the growth will now rely on partnerships and developers creating apps supporting DeX mode, along with new peripherals to tie in with this growth. Samsung had a dream of eventually replacing the laptop, and has spent time and resources in taking us closer to that reality. The problem Samsung now faces, apart from polishing off the experience even more in the months and years to come, is that many OEMs may now also start to see the potential in delivering the same experiences on their devices, which will be a great thing for the consumer, as the different design teams start creating better user experiences driven by competition.

Samsung may not be the first company to attempt this venture, and won’t be the last, but right now, it’s the best.

After 18 months and 3 iterations, Samsung has finally delivered a native DeX experience I can get behind, as it delivers great results.