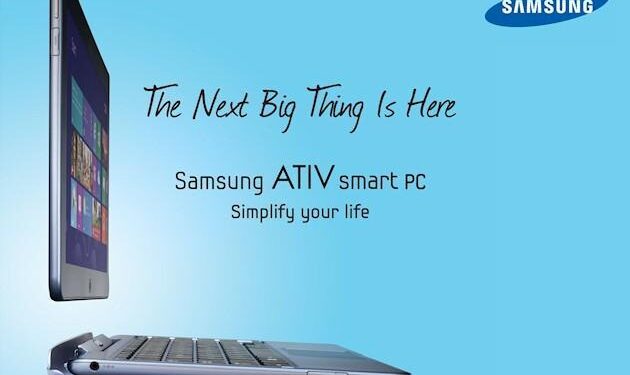 Shortly after last year’s Microsoft Windows 8 announcement and unveiling, Samsung held its own event to announce its upcoming Windows 8 series, the Samsung Ativ Smart PC range. Officially, the Samsung ATIV Smart PC 500T1C Tablet is classified as a laptop-tablet hybrid. The aim of the device is simple: function as a fully operational laptop, while being able to switch to a tablet while on the go. The question is whether it is able to function well enough as either. As with many other Samsung products, the look and feel comes under some scrutiny. As is often the case in that regard, the device has a plastic back cover, with a slight brush of texture hinting at a supposed metallic finish. Despite this, Samsung always seem to impressive instead with fancy colour themes, this being mystic blue. Despite the plastic trimming, the Ativ Smart PC still weighs around 750g for the Wi-Fi model and more than 800g for the 3G equipped version, which is surprisingly heavy. However, you have to factor in that this device comes standard with a dockable keyboard/mouse combo, transforming it into functioning laptop.

Switching between these two modes is simple; with a click of a button to detach the touchscreen, and an easy to find latch to clip it back in. The only major issue here is that when docked, the dedicated Windows 8 key is obscured from any use. A design flaw also worth pointing out is the apparent mismatch in the finish between the dock and touchscreen, one a matte plastic look, the other a more glossy approach, almost as if were manufactured in different factories within the Samsung family. There are no real trinkets on the front of the device: only that of the already mentioned Windows 8 button, a centred camera and two, thinly lined speakers on either side. On the sides of the tablet you’ll find a few essentials; the USB 3.0 port, micro-HDMI slot, 3.5mm audio jack, power button, rotation toggle, volume keys, micro-SD slot, a dedicated slot for the S Pen, and most importantly, a SIM slot for 3G connectivity. A 5MP camera with flash is integrated at the rear. One of my pet peeves with any laptop, or other similar mobile devices, is the touchpad. While the keyboards very in response, finish, and feel, the touchpad always seems to be non-functional for some or other reason. On the Ativ Smart PC, I’m glad to say, is pretty much exactly what I was expecting, a non-functional touchpad. From slow pointer movement (even after adjustment), to failed clicks and double clicks, it is always useful to have a wireless mouse lying around for use on just such an occasion.

This is where the S Pen comes to the rescue. Although it isn’t entirely necessary, it is very useful, especially for those movements and clicks that require more precision than that of our stubby fingers. All technical details, digitisers, and degrees of pressure aside, the S Pen makes life with the Ativ Smart PC so much more bearable. While it is even more practical for design purposes, performing simple functions such as drag-and-drop in explorer makes all the difference. The unit is surprisingly smaller than those found embedded within the Galaxy Note range, and even includes a grip for better use. As with the Notes, the device comes with some preloaded software for more optimum use. While there are many that tend to focus on Samsung’s lack of design and persistence with the plastic covering, their hardware has seldom incurred the same levels of anger. Fitted inside you’ll find an Intel® ATOM™ 1.8GHz Processor, 2GB LPDDR2 RAM, 64GB e.MMC iNAND™ embedded flash drive (internal storage), 11.6″ HD LED display with 1366x768px resolution, Intel integrated graphics, and a 2Cell 30Wh battery. Compared to your average laptop, these specs may not be sufficient to write home about, but as a combined effort, everything functions quite remarkably efficient.

Samsung, as many other manufacturers do, added some bloatware to the Ativ Smart PC. I’ve already mentioned the addition of the S Pen suites, while others include AllShare, QR scanner, S Service, S Gallery, S Player (and any other S apps you can think of) and an S Launcher app, which effectively restores the Windows 7-style Start Menu. The major drawback here is that the software immediately required an update. Almost 2GB later and the tablet was good to go for further testing. The Samsung ATIV Smart PC 500T1C Tablet has many negative aspects, while all the positive notes just allow it to stick its neck out the water. The device weighs similar to that of the average laptop with its dock, and its battery life is a constant factor, even while docked. Then, considering the R9,999 price tag, it costs significantly more than many other laptops. The touchscreen and other additions certainly drive up the price a bit, but is bordering too close in the Ultrabook territory. With the onscreen keyboard and useless touchpad, you will find yourself using the Ativ more as a tablet than PC, bringing into question why it can’t be purchased as a standalone device. Granting that the Ativ Smart PC has useful and unique features, it may not be sufficient when consumers have to decide how deep into their pockets they should be reaching.