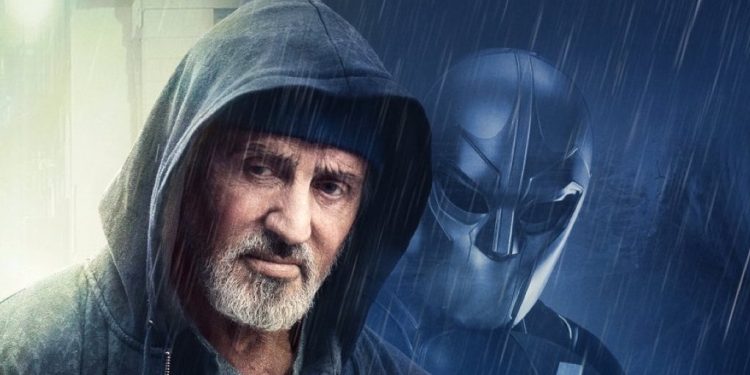 Amazon Prime Video and MGM Studios have officially released the first trailer and poster for Julius Avery’s Samaritan, a superhero action movie starring Sylvester Stallone. And it could easily be described as Rocky meets Batman.

In the Amazon Original, a young boy learns that a superhero thought to have disappeared after an epic battle twenty-five years ago may still be around, now as a garbage man. Sylvester Stallone stars as “Mr. Smith”, a sanitation worker who the boy believes was once the superhero known as “Samaritan”.

“How strong are you?” the boy asks in the Samaritan trailer. “Not as strong as I once was… Things start to fall apart when you stop caring,” the ageing hero responds after being hit by a car. Things get ultra-violent when a group of bad guys want the former superhero dead. Stallone’s character is seen taking bullets, breaking limbs and beating up large groups of baddies.

The pre-release poster shows Stallone’s mysterious character Mr Smith walking down a rainy alley, with the large puddle at his feet showing a reflection of what we can only assume is the character’s superhero alter-ego in a full black costume with a symbolic ‘s’ displayed on his chest.

As the Samaritan trailer shows, there’s something very familiar about the concept, the setting and Stallone’s character. A lot of it looks and feels like Rocky or the spin-off series, Creed. Of course, this also might just be that we’re excited about anything Rocky-related.

“This is a big event movie – we see our heroes kicking ass,” Avery had recently told Total Film. “We’re going to see Sly do things he hasn’t done in a long time, and in a really inventive way. He’s 73 years old! I’m amazed by how much he actually does. I’m telling you, most guys in their twenties wouldn’t be able to do what Sly does in this movie.”

Samaritan will unmask the truth on Amazon Prime Video on August 26. At age 76, Sylvester Stallone shows no evidence of slowing down. And we love that!

Tell us, what did you think of the Samaritan trailer?