Avengers: Infinity War and Avengers 4‘s Russo Brothers are producing a TV series. If the first trailer is anything to go by, Deadly Class should be loads of fun.

Based on the best-selling Image Comics graphic novel by Rick Remender and Wes Craig, Deadly Class is a coming-of-age story that will follow Marcus, a disillusioned teenager who is recruited into an elite private academy where the world’s top crime families send their next generations to become assassins. There he will have to overcome the vicious social cliques and survive a ruthless curriculum.

“Deadly Class is one of the more twisted coming-of-age stories we’ve ever read. It does an amazing job of exploring teenage years and the sense of alienation that you feel. The first time we read the book we were blown away. That’s why we’re standing here working on the show,” said the Russo Brothers.

Deadly Class premiers on the Syfy Channel in 2019. 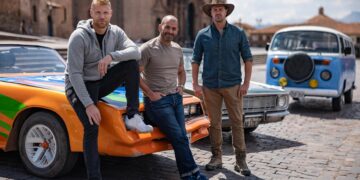