When I first acquired my PlayStation 4 a couple of years back, the game that was included was HB Studios’ Rugby 15. That was possibly the worst representation of a rugby game to date. Since then, I have been looking out for a suitable game to come along on console. I have played Tru Blu’s Rugby Challenge series and was pretty impressed with the gameplay and graphics. When I heard about Eko Software’s Rugby 18, I was really hoping that we would finally get the rugby game all the die-hard fans have been waiting for. I was wrong. Rugby 18 has licenses to most of the major international teams, including the All Blacks and Springboks, however, Ireland and Argentina are not included. The Day One Edition also includes The British and Irish Lions, which is available as a download at an additional cost. They also have the licenses to the official leagues across England and Europe. Unfortunately, southern hemisphere fans will be disappointed to find out that there are no Super Rugby or Currie Cup leagues or teams to play with. The Cheetah’s and Southern Kings are, however, included in the Pro 14 league. Of course, those are not the only shortcomings. There are also no international competitions like the Six Nations, Rugby Championship or even a World Cup competition. Furthermore, there are only eight stadiums to play at, which does not include any official stadiums. They are named Stadiums 1 to 8 and only allow the option to play either during the day or night. I was also disappointed to find there was no Haka when I played as the All Blacks. The graphics in Rugby 18 is a major step up from the previous instalments but is still not on par with other leading sporting games like FIFA or the NBA2K series. It also only offers three camera angles, which disappointingly do not include any side views. After every stoppage, there is an annoying screen that appears which is rather unnecessary.

The gameplay has also improved just a bit, but I still found it to be poor and filled with a lot of annoying glitches. It’s extremely difficult to score tries during matches as the players always tend to get tackled. Players can’t speed away into openings as they tend to run out of steam very quickly, resulting in being tackled and a ruck being formed. Most of Rugby 18 revolves around rucking and it becomes monotonous after the first couple of games.

The commentary, music and overall sound are also very average. The only real positive I could take away from this game is the kicking, scrumming, and lineouts which are pretty decent. In the main menu, there are five game modes to choose from. You can play a ‘Quick Game’ either offline or online. You can play one of the official leagues included which are the Aviva Premiership Rugby, Top 14, Pro 14 and Pro D2 leagues. In ‘Career Mode’ you can build a team from scratch and play your way to the top of the log. In ‘My Squad’ you can create up to four different teams to play offline or online. You can also use points that you earned to sign all of your favourite players. These points are earned by answering trivia type questions during the loading screen. Lastly, there is the ‘Weekly Challenge’. Here you play out a weekly scenario to earn points as well. Eko Software has tried to inject new life into this series but unfortunately, Rugby 18 is another disappointing attempt at a rugby game. With the sport becoming ever more popular around the world and with the next Rugby World Cup taking place in Japan next year, let’s hope that a big publisher like EA Sports can grab the opportunity and release the rugby game we have all been waiting for. At the current price this game is retailing at, I would give Rugby 18 a pass and grab Tru Blu’s Rugby Challenge 3 at a reduced price instead. 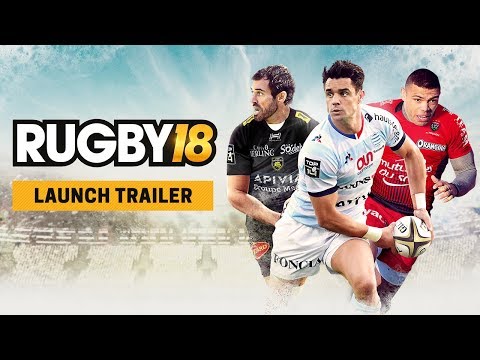