Win 1 Of 3 Rogue One: A Star Wars Story DVD Hampers 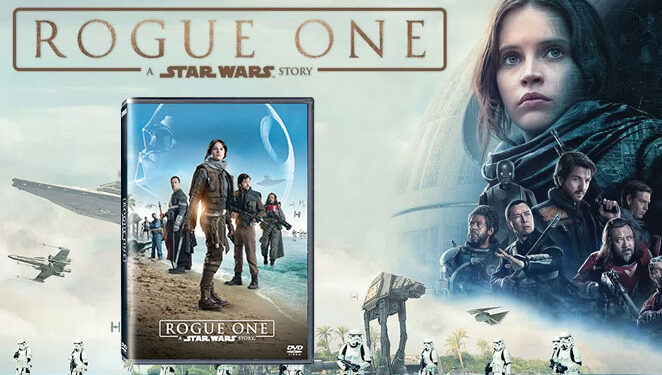 WIN! WIN! WIN! To celebrate the release of Rogue One: A Star Wars Story on DVD and Blu-ray on April 14th, Disney Africa is giving 3 very lucky readers the chance to win exclusive Rogue One merchandise. These are the Star Wars prizes you are looking for! From Lucasfilm comes the first of the Star Wars standalone films, Rogue One: A Star Wars Story, an all-new epic adventure. In a time of conflict, a group of unlikely heroes band together on a mission to steal the plans to the Death Star, the Empire’s ultimate weapon of destruction. This key event in the Star Wars timeline brings together ordinary people who choose to do extraordinary things, and in doing so, become part of something greater than themselves.

Never-before-seen Rogue One bonus material will take fans behind the scenes with the movie’s diverse, dynamic cast and inspired team of filmmakers. An intimate collection of stories reveals how the film came to life, as well as hidden Easter Eggs and film facts that audiences may have missed in the theatre.

* A Rogue Idea – Hear how ILM’s John Knoll came up with the movie’s concept – and why it’s the right film to launch the Star Wars stand-alone films.

* Jyn: The Rebel – Get to know Rogue One’s defiant, resourceful survivor, and hear what it was like for Felicity Jones to bring her to life onscreen.

* Cassian: The Spy – Diego Luna shares insights into his complex, driven character, who becomes a hero through selflessness, perseverance and passion.

* K-2SO: The Droid – Explore the development of this reprogrammed Imperial droid, from initial pitch and character design through Alan Tudyk’s performance.

* Baze & Chirrut: Guardians of the Whills – Go deeper into the relationship between these two very different characters, with Chinese superstars Jiang Wen and Donnie Yen.

* The Empire – Meet a dangerous new Imperial adversary…and cross paths once more with the most iconic villain of all time.

* Visions of Hope: The Look of “Rogue One” – The filmmakers describe the challenges and thrills of developing a bold new look for the movie that can fit within the world of the original trilogy.

* The Princess & The Governor – See what it took to bring the vibrant young princess of “Star Wars: A New Hope” – as well as one of her most memorable foes – back to the screen.

* Epilogue: The Story Continues – Filmmakers and cast celebrate Rogue One’s premiere and look forward into the future, to the Star Wars stories yet to be told.

To stand a chance of winning this hamper (courtesy of Disney Africa and Lucasfilm Ltd), all you need to do is tell us your favourite Star Wars quote (in the comments section below), tell us which prize you’re interested in and share the comp online. May the force be with you!

As always, all you need to do is share this page on Facebook (your wall) or Twitter (#GoRogueSA) and then leave a comment below (in the comments section) completing the above – on this page! The Giveaway/Competition closes Friday – 12th May 2017 at midnight.