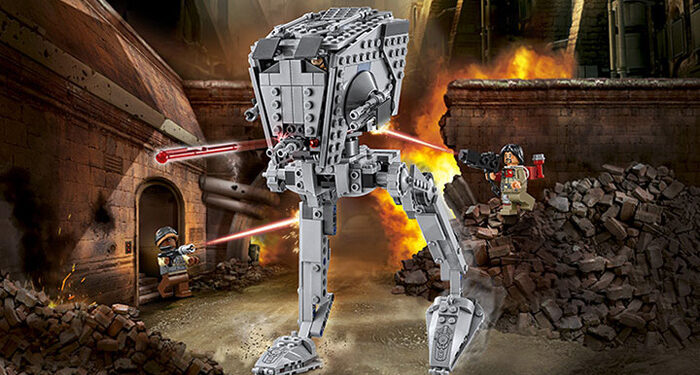 Ever since LEGO started releasing Lego Star Wars sets I’ve been wanting to get a Lego AT-ST Walker, and now with the released of the new Star Wars: Rogue One sets I finally got my chance. Now, LEGO has released quite a few of these bad boys starting way back in 2001 with the Imperial AT-ST (72127) which was quite a small set compared with the AT-ST Walkers currently on the market as it consisted of only 107 pieces and one lonely Chewbacca Minifigure. The release of the Rogue One film saw LEGO releasing yet another AT-ST Walker set (75153) this time I couldn’t help myself and finally decided to buy the AT-ST Walker I’ve always wanted. So what did I think of my first ever Lego AT-ST Walker set, was it worth the wait? The set consists of three Minifigures and has 449 pieces. In terms of the build, I found the set quite easy to put together due to the vehicles symmetrical design. A welcome design choice, for me personally, is that the set does not contain loads of stickers, as I find myself becoming quite nervous and sweaty when faced with the nerve-wracking task of placing stickers on a tiny little LEGO brick. I have also found in the past that some stickers just don’t tend to add much visually to a set.

In this case, I found less to be more, as the stickers accentuated specific parts of the set such as the feet and rear cockpit, adding some welcome detail. I did notice, after completing the build, that the model was a tad larger than I first thought it would be. Of course, I’m not complaining as the increased size allowed for more detail to be added. Considering its size I was surprised at how stable the final AT-ST Walker was. Sure, it didn’t have much articulation, but at least I didn’t have to worry about it falling over all the time.  Regarding the play features, the AT-ST’s Cockpit has the ability to rotate using a gear at the back of the Walker.

Both of the side-mounted weapons are able to swivel without the fear of them popping off. The AT-ST’s cockpit is quite cozy and can be accessed through a hatch or lifting the whole roof, with both being connected with hinges. Inside there is a printed-on control panel and even a Thermal Detonator for your Imperial AT-ST driver to use. As can be expected for most LEGO Star Wars sets these days the AT-ST does have two well-hidden spring-loaded missiles to take out those pesky rebel scum. The one issue I did have with the set is that it uses blue Technic pins in the leg construction. Now normally this wouldn’t be too much of a problem if these were hidden away, but unfortunately, when viewing the AT-ST’s legs from the side they are clearly visible and quite distracting. I’m not sure why LEGO didn’t just use gray or dark gray pins, as these would have been less distracting, especially when viewing the Walker from the side. Another small complaint I have regarding the build is that there were some visible gaps when viewing the inside of the cockpit. But considering that these aren’t visible from the outside it didn’t bother me too much. Of course the main attraction, besides the obvious AT-ST itself, is the Baze Malbus Minifigure. Once again the figure has some really highly detailed printing, especially on his torso. It’s quite amazing to see what amount of detail LEGO is able to print on a Minifigure these days. Once again Blaze also has a second more serious face. Although his goatee does replicate the character from the films perfectly, even incorporating a bit of gray, I did find his hairpiece to not be as true to his on-screen character as I would have liked. Something about it just feels a tad off, it could be because Blaze’s hair in the film is a bit more pulled back than his Minifigure’s, but besides this little complaint the figure is a great looking highly detailed one.

The best part of the figure is his huge and intimidating gun. I really appreciate that LEGO didn’t just create a mold for the gun and cast it as one piece, as it was quite a bit of fun building it out of various familiar LEGO pieces. In the end, I found myself falling I love with this set. Not only was it easy to build, but it looks just as intimidating as the one in the film no matter which side you view it from. The sets ability to rotate the cockpit along with the well-hidden missile shooters adds a nice bit of realism to the set. All three Minifigures are highly detailed and I loved the fact that Blaze’s oversized weapon is a build in itself. This is, in my opinion, LEGO’s best AT-ST walker to date, and one that every LEGO and Star Wars fan would be happy to have as part of their collection.

Overall, the Rogue One AT-ST Walker is a beautifully detailed set that faithfully recreates one of the Star Wars Universe’s most iconic vehicles.