Definitely an option for gamers. As the gaming peripherals segment continues to grow year on year, the market has opened up for more brands to enter the fray. While most of the high-end market is fairly locked down, the entry-level and mid-market is fair game. Roccat is the latest brand to land on the South African shores, one of many new gaming OEMs in recent years. For our first review of the brand, we take a look at the Roccat Elo 7.1 Air gaming headset — which falls into the mid-range category.

Much like Razer, the brand is fairly new, having been founded in 2006 by a former Razer Vice President of Europe, Renê Korte. It offers an extensive list of gaming hardware, which includes mouses, keyboards, headsets, mousepads and more. But, being a new entry into the local market, there’s a lot it has to prove. This includes the quality of the product, quality of the build along with a touch of style to sway some of those on the fence. As such, I take a closer look at the Roccat Elo 7.1 Air, seeing if it has what it takes to compete in an ever more saturated gaming market. When you’re designing a headset for the gaming community, there are almost always certain criteria you’ll need to check off before signing off. One of the first to make the checklist is an RGB lighting system. The Roccat Elo 7.1 Air has that covered. On the left-hand side earcup, this is presented in the form of the Roccat logo in the centre. However, it’s not an asymmetrical design, with the right-hand side having the Roccat text in the centre, while still including the LED lighting.

Next on the list is to have sufficient padding, as users will be expecting to game through plenty of hours without interruption. Again, the headset ticks another box. The padding is available in bounds, both on the earcups, as well as across the headband on the top. Padding on the cups features memory foam, which is then covered by means of faux leather. This is softer padding than on the headband, which flexes under pressure but is still firm enough to provide sturdy comfort.

In terms of the design, it follows most of the standard elements, along with a few noticeable changes. The cups feature the standard rounded shape with a protruding back end to house the drivers and other electronics. Right above the cups is one of the first changes over the norm. Compared to the rest of the band, the ends above the cups are wider, to create a bit of space, but also to take away unnecessary tension on the ears but still makes for a comfortable fit. And then there’s the band itself. It’s split into two segments, the first being the strap underneath to provide a cushioned, yet secure fit, while the second being the metal, two-pronged frame for sturdiness.

All of the buttons fitted onto the Roccat Elo 7.1 Air are added to the left-hand side earcup. This includes, from the top, the volume rocker, the side-tone rocker, a mic on/off, power on/off and USB port for charging at the bottom. The buttons themselves have a solid build and are easy to use. However, the one design flaw here is that the volume and side-tone rockers are exactly the same, so it makes it harder to distinguish from the two when you can’t see what you’re using.

One last item, which also attaches to the left-hand side cup is the mic. The detachable unit easily clips in and out without too much fuss. It can also be adjusted to where you feel most comfortable thanks to its flex approach.

Overall, both the design and build are fairly good. It’s not going to be winning any awards I wouldn’t think, nor does it do that much to stand out from the crowd. That said, it gets the job done. 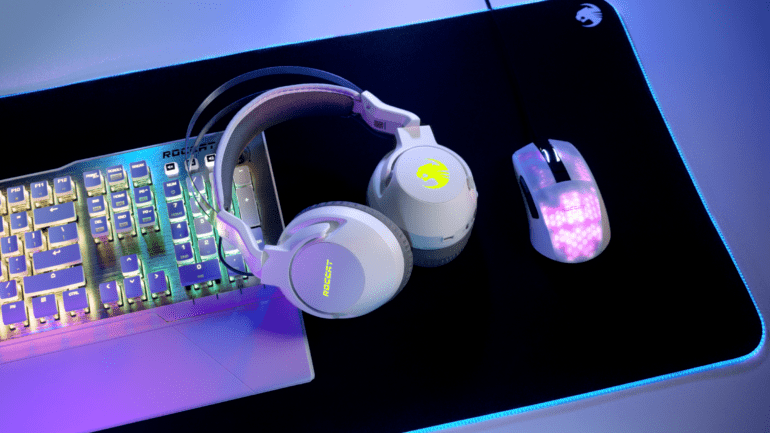 Setting up is a breeze. There are two options, both of which are straightforward. The first of these is via the USB WiFi dongle (2.4GHz USB RF). Simply plug in the dongle to your device and then turn on the headset and you’re all set to go. It’s that easy.

The second option is the cabled approach. As with most wireless gaming headsets, there’s a dual connectivity option. This includes a USB cable, which plugs into the headset’s Type-C port and then into your device using a Type-A port.

To enable all the features available on the headset, you’ll need the Roccat Swarm software. Once installed, you’ll have access to enable the 7.1 virtual surround sound, as you would’ve guessed was supported as a result of the “7.1” tag in its name.

There are also multiple levels of controls available via the software, include granular controls, equaliser, mic settings, noise cancellation and even the LED lighting effects. There isn’t a lot of options and features available, but it gets the job done in terms of customisations. In addition, the app isn’t designed well in terms of its layout. It’s a bit chaotic, which may make it challenging to find something you’re looking for which may be there, but not being able to find it can seem like it isn’t.

In all honesty, once you’ve made the initial customisations, there’s very little chance you’ll be using the app again anytime soon thereafter. It does what it needs to. 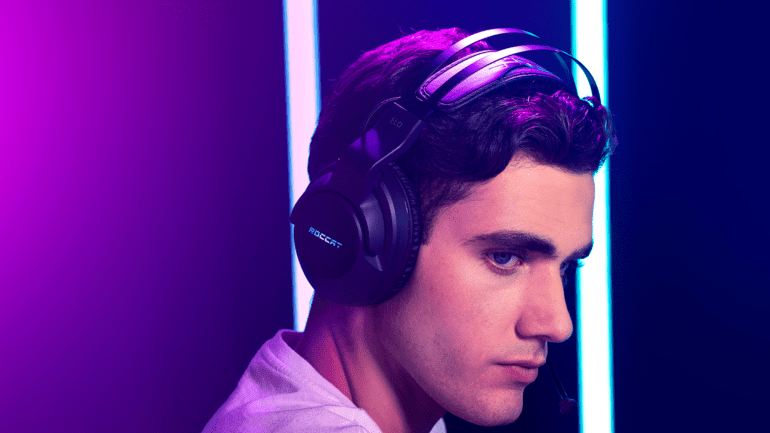 In terms of the specifications for the Roccat Elo 7.1 Air, it includes 50mm Neodymium drivers in both earcups. It has a 32Ohms impedance and a frequency response between 20 and 20,000Hz.

When it comes to performance, the headset delivers a well-rounded audio output. It produces clear audio on the mids to highs but lacks some response on the lower end. This means that the bass isn’t as clear. The sound performance is well enough but has some distortion as the volume increases, which isn’t ideal. This mostly affects performances of music and movies.

When it comes to gaming, the unit has a better performance. Once you’ve activated the virtual surround sound, the sounds and details within the game are very clear. From the rustling of the grass to the gunfire all around, it’s quite good.

Another aspect worth mentioning about the Roccat Elo 7.1 Air gaming headset is that it makes use of the Turtle Beach “Superhuman Hearing” feature. The aim here is to amplify certain sounds within games, which includes the likes of footsteps, allowing you to supposedly gain an advantage over other players. The feature does come at the expense of balance in the audio. For the audiophiles out there, it may not be an enjoyable option to enable.

Overall, in terms of sound, the unit does what it needs to do. As a gaming headset, it gets the job done really well, with a lot of detail. It would’ve been great to have a more well-rounded performance on the bass to make it ideal to listen to your favourite tracks. And while you can still do so, it doesn’t reach the highs required, especially on those bass-heavy tracks.

When it comes to the microphone, it’s actually one of the standout performances on the headset. Not only is it very clear, but the volume is also well-tuned, which means you won’t get the tin sound or the nasal sound we find in many other mics. It works right off the bat, which is also ideal for those who don’t like to tinker too much with default settings.

It also does well at muting background noise. There is a range of noise that does make it through, however. Ironically, this is more in line with metallic and mechanical sounds, such as keyboard strokes on mechanical keyboards. Other noise such as talking and others don’t creep in as much, so that’s quite good. Overall, there’s nothing major that would affect performance, allowing your teammates to clearly hear your commands in-game.

In regard to the battery life, Roccat claims that it should last about 24 hours. In real-world testing, the Roccat Elo 7.1 Air gaming headset averaged between 23 and 24 hours, which is pretty spot-on in the end. But, that’s all with the LED lights turned off. Having them on, however, battery life drops by a third, down to about 16 to 17 hours. It’s still fairly decent overall. 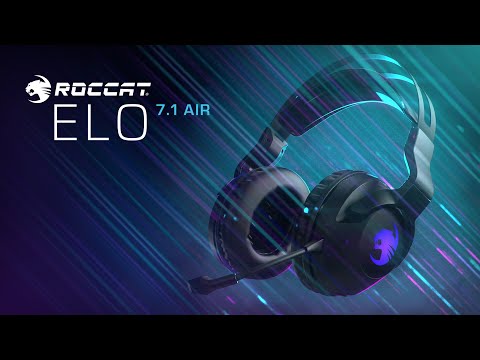 The Roccat Elo 7.1 Air is a very decent wireless headset. With its removable microphone and quality audio, it gives a very good account of itself and the brand as a first impression.

In the US and Europe, the headset is labelled as a sub-$100 (or sub-€100) device, which falls into the lower end of the mid-range category. Due to the fluctuating exchange rates of the Rand over the past year, by the time the Elo 7.1 Air reaches South Africa, the price is well above the R2,000 mark. This puts it in the ballpark to compete against the likes of Logitech, Razer, Corsair and the likes. It may have been better placed if it were competing in the slightly lower category including the likes of Turtle Beach, SteelSeries, JBL and others.

That said, with a solid performance, it’s not to say that its pricing isn’t justified. There’s a lot of promise for the brand in the country and here’s to seeing a lot more in the coming years.

As our first Roccat review, the Elo 7.1 Air delivers on expectations. The build and design are solid without being over-the-top, with the sound also offering quite a bit, especially in-game once the 7.1 virtual surround sound is activated. However, it lacks a bit in the performance of the bass, which distorts slightly on higher volumes. With 24-hour battery life, and comfortable usage even over many hours of use, the Roccat Elo 7.1 Air will be a definite option for gamers.