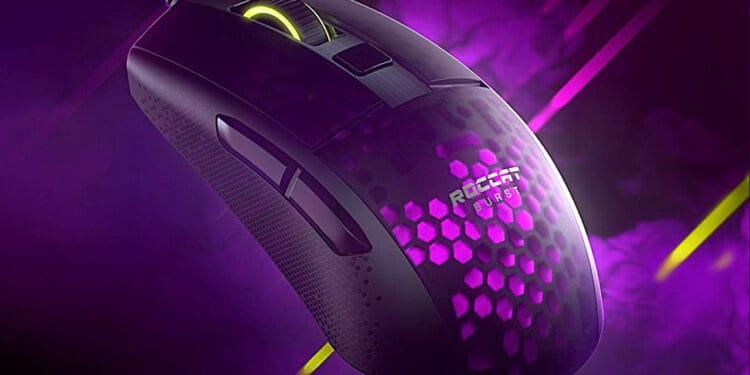 At first glance, the Roccat Burst Pro Gaming Mouse looks great, with its RGB lighting and honeycomb pattern design. But are its looks deceiving?

Choosing the right mouse for gaming has become increasingly important. This can be across home, office or gaming uses, with some even designed for women. While there are many pro devices for gaming that offer plenty of buttons, shortcuts, macros and more, it may not suit your style of play. Additionally, having something that ergonomically suited to you is just as important, especially for extended gameplay.

A few days ago, I reviewed my first Roccat device, the Elo 7.1 Air Gaming Headset. Adding to its collection of midrange category units, the brand has released the Roccat Burst Pro Gaming Mouse.

Ergonomic, comfortable and lightweight are a few of the adjectives used to describe the Roccat Burst Pro.

Are these enough for the optimal gaming mouse to suit your style of play? There are a few additional components added to the build to do just that.

We take a closer look at whether this works. 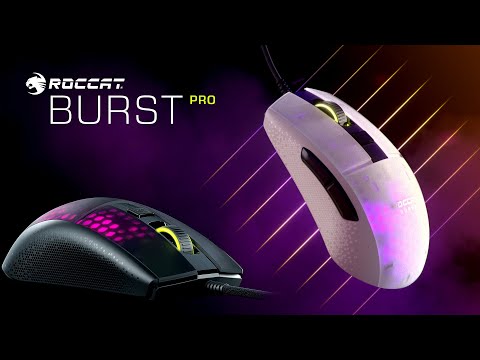 It’s difficult to stand out from the crowd when it comes to mouse design. This is especially true if you’re not going to go with an over-the-top look. That said, the Roccat Burst Pro managed to grab my attention even with its subtle approach.

One of the first aspects you’ll notice is its translucent nature. It’s not the entire exterior but portions of it that are exposed. On the white version I received, it’s a lot more noticeable in comparison to the black. The unit includes RGB lighting, which isn’t exposed but rather shines through the translucent cover, which is focused more on the rear end.

The rear end of the mouse has a honeycomb pattern design, where the “holes” are transparent allowing the RGB light to shine through. This is also featured on the sides with a much finer pattern. It’s a fairly simple approach but looks very pleasing regardless.

In contrast to the white cover, there a few areas in matte black. This is reserved for the buttons on the side, which by default are the back and forward buttons, along with the middle section that houses the scroll wheel and DPI control.

There are two caveats with the design approach, however. The first of these is the all-over plastic build does make it a tad on the slippery side when your hands become sweaty after a few hours of usage. Additionally, there aren’t any side grips that would aid in reducing some of this slippage.

Roccat has definitely shied away from an over-the-top design, which can easily be the case when it comes to gaming units. At the same time, it offers quite a unique style with its translucency, RGB lighting that shines through and the honeycomb pattern approach. It works quite well when put together. 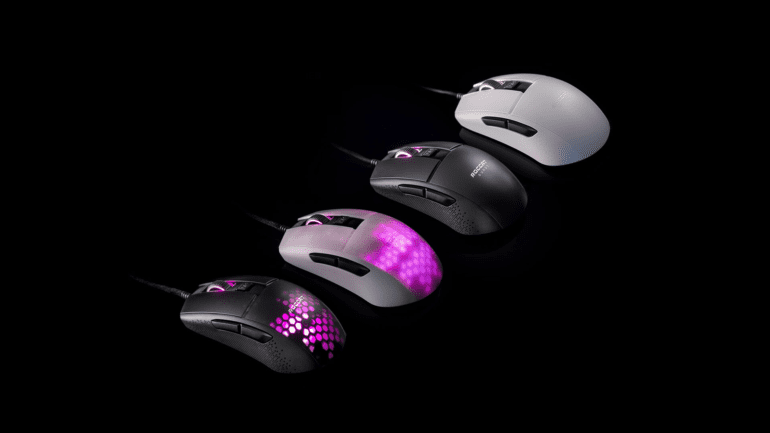 Because the Roccat Burst Pro is a wired gaming mouse, the setup is fairly straightforward. Just plug it into an open USB port and you’re good to go. Windows will detect the mouse and download the drivers accordingly without any further intervention if you don’t want.

But that isn’t necessarily the end of the story, as there are options in play to get more features from the mouse. This can be unlocked via the downloadable software from Roccat.

Features from the software allow users to set up a host of settings. It’s not just a few tweaks and checks, but rather provides very detailed customisation options for those professional users.

These features include scroll speed, double-click speed, pointer speed, as well as the various DPI sensitivities for each of the five levels of adjustment. Next on the list is the button configuration. Here you can assign what each of the buttons do when clicked, as well as adding an “easy-shift” option to double the number of button assignments.

Then we have the RGB lighting customisation. Here you can choose between a number of presets, as well as customise your own based on colours and patterns. And finally, there’s the Macro Manager. Users can set up their own macros to use, and can even save these per game, which will make it easier to toggle between them once configured.

The software is quite useful overall and isn’t something that you should overlook if you want to get the best performance from our Roccat Burst Pro. 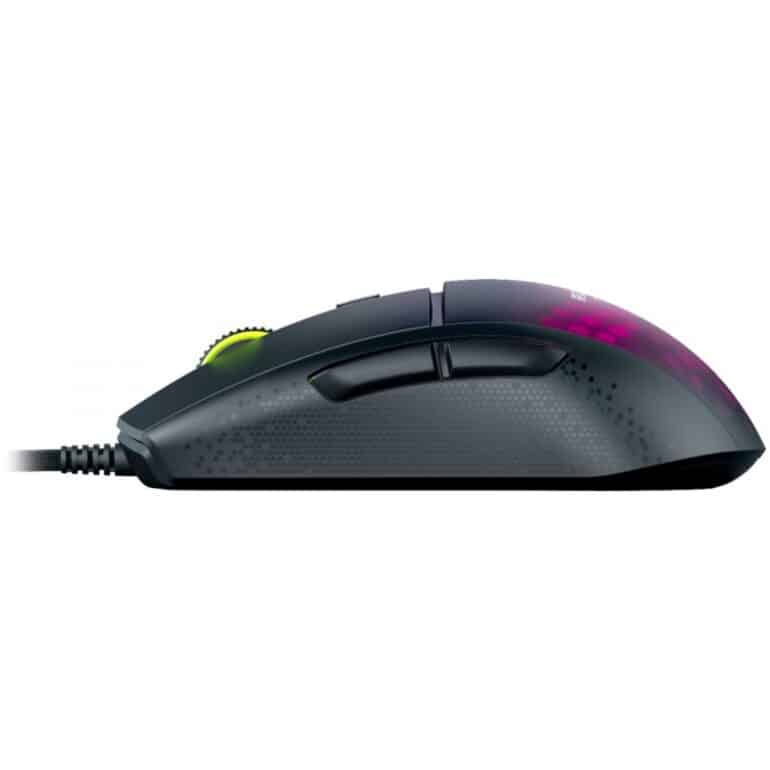 When it comes to performance, the unit really delivers. Roccat has added quite a bit of detail into the design, as well as a few enabled through software features.

The most notable of the performance areas is that of the sensor. It’s quite accurate thanks to the in-house, Roccat Owl-Eye technology. It works great, even when setting the DPI to much high sensitivity, which reaches up to 16,000 CPI. With a polling rate of 1,000Hz, you won’t be left wanting with jumps or lag from the mouse when in use.

Additionally, the rubber feet also make for pretty impressive results. Roccat lists the material in use as virgin-grade PTFE, which has been heat-treated. According to the brand, it has been pre-tuned to offer a smooth gliding experience, whether you’re using a mouse pad, desk or general surface. I’m still not too sure what the PTFE is, apart from rubber PTFE being resistant to almost all chemicals, allowing it to have the gliding feel on top of any surface. This is further aided by its lightweight build, which weighs in at just 68g.

Roccat has also added Titan switches to the mouse, which are optical switches. Many brands have been moving away from mechanical switches, with the promotion of it adding better response times and increased durability. That said, you may not always note the differences between the two without detailed studies, especially when it comes to durability, which is said to be around 100,000 clicks on the Burst Pro.

The overall performance is great, with super-smooth gliding and very accurate feedback from the sensor. 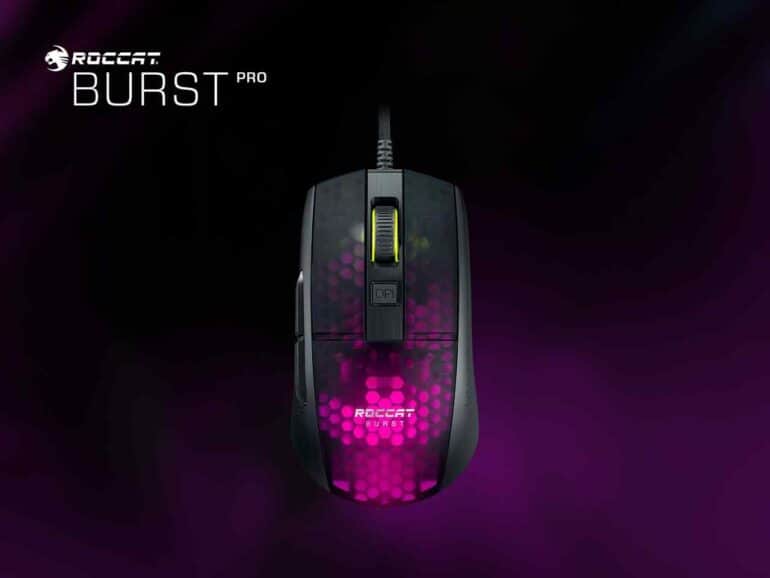 If you’re looking for a gaming mouse that’s not compromised by over-the-top design features, while offering reliable and efficient capabilities, then the Roccat Burst Pro Gaming Mouse is definitely a suitable option for you. It offers an ergonomic and ambidextrous design with a fine-tuned gliding system. At a price of R999, it’s also fairly reasonably priced. If you’re in the market for a new gaming mouse, the unit should be on your radar.

Choosing the right gaming mouse can sometimes be quite a pain. However, Roccat aims to make this a much simpler process by providing prospective buyers with a simple, yet effective gaming mouse. The Roccat Burst Pro Gaming Mouse looks great, with its RGB lighting and honeycomb pattern design. It also works quite well, gliding over surfaces as you look for that accuracy in key moments during any game.