Robotech #1 Review – Everything Fans Love From The TV Series 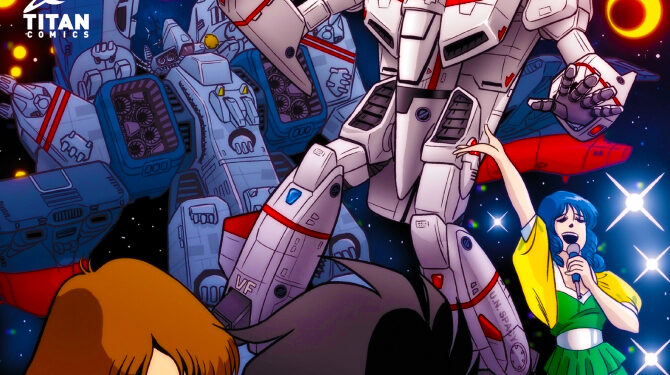 Robotech was one of the first anime series to achieve success outside of Japan. Blending sci-fi action with romance and drama, it wasn’t just a story, it was a saga of epic proportions. Because of its incredible legacy, any adaptation is bound to be met with scepticism, but fans have no reason to fear. A giant alien ship crash-lands on Earth and is instantly seized by the military. Over the course of the next ten years, the technological military advances brought about by this arrival are huge, and a city has built up around the ship – now named the SDF-1. The SDF-1, now outfitted for use by the human race, is ready to embark on its maiden flight. Yet in space, an alien armada has arrived and launches an invasion. For young pilot Rick Hunter, his life is about to change as he gets dragged into a war beyond anything he ever imagined…

This first issue of Robotech is everything fans know and love from the TV series. While the art style may be different, all of the characters are instantly identifiable and that’s one of the most important factors here because they were what made the series work. There’s a sense of realism here instead of the original cartoonish nature, but it doesn’t suffer because of it. The ships and classic mecha fighter jets are all on display and look imposing as ever, and the action kicks in fast. Likewise, the writing keeps all of the major plot points from the first episode, with the identity of the Zentradi aliens and the reasons for the SDF-1’s initial crash being kept a mystery. Instead, we’re introduced to General Gloval, who clearly struggles to balance politics and military life, and the dynamic between Rick Hunter and his “big brother”, fighter pilot Roy Fokker. For Rick, he’s in the wrong place at the wrong time and it’s easy to understand his confusion.

If there are any complaints, it’s that we don’t learn enough about Rick and don’t focus on him enough to realise why he’s the main character. But then, as fans may be aware, the story of Robotech is a marathon and not a sprint. This is an introduction, and the real story is only just beginning. However, there’s plenty of promise on display here. It may not quite convey it because of the slow-burn start, but it requires patience and readers need to give it some time.

If this first issue is any indication, Robotech looks set to be everything fans could want.