PlayStation 4 gamers were left out in the cold and wanting when Rise of the Tomb Raider launched on the Xbox One nearly a year ago. All they could do was listen as the game was lauded as one of the best Tomb Raider games in recent memory. Now, at last, after nearly a year, PlayStation 4 gamers have the chance to play this amazing game and all it’s DLC (including some other goodies) in Rise of the Tomb Raider: 20 Year Celebration, and there is no doubt that it was worth the wait. 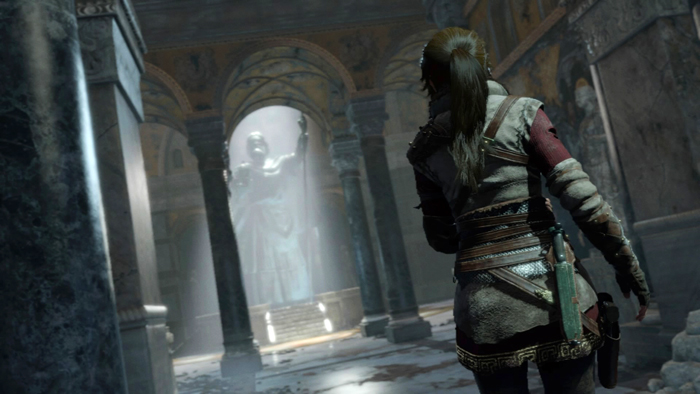 [dropcap]R[/dropcap]ise of the Tomb Raider: 20 Year Celebration takes place after the events of 2013’s Tomb Raider reboot, as we find Lara struggling to come to grips with what she experienced. Searching for answers she finds herself falling deeper into the rabbit hole as she becomes obsessed with her late father’s research. Lara seems to be heading down the same path that drove her father insane as she sets out to look for the promise of immortality in the lost city of Kitezh. As can be expected Lara isn’t the only one looking for the answer to immortality, as a centuries-old evil organization called Trinity (we all knew it was coming) is also looking to claim this reward for themselves. As with any good action/adventure games/films, this leads to a race against time as both parties try to outwit each other as they seek the ultimate reward…immortality.

[pullquote]…Rise of the Tomb Raider: 20 Year Celebration’s strength once again lies in the fact that it focuses on not only Lara’s journey…[/pullquote]

As with the 2013 Tomb Raider, Rise of the Tomb Raider: 20 Year Celebration’s strength once again lies in the fact that it focuses on not only Lara’s journey to fight against all odds but also on her personal struggles as she desperately seeks to honour her father by proving that he wasn’t insane and that his research and theories are actually true. It’s refreshing to see the narrative focus on Lara’s vulnerabilities as she not only has to take on some increasingly overwhelming odds but also has to contend with her inner turmoil. I was surprised that even the villains, who at first glance might seem like you standard cut-and-paste evil organization, actually has loads of depth to their characters. So much so that I even found myself understanding why they were doing what they were doing. But playing a Tomb Raider game means that you are not just playing for the story. What about the action and gameplay? Well, luckily the game once again shines in this department. Combat, leveling up and crafting hasn’t changed that much from its predecessor and I say if it isn’t broken don’t fix it. Lara has three skill trees, hunting, brawling, and survival, in which she can invest experience points. Each of these unlocks a certain perk in that category, for instance, the ability to craft arrows quicker, or taking less damage from explosions. Each of Lara’s weapons can once again be upgraded using the various crafting materials scattered across the levels.

The way in which both the crafting and upgrade systems actually makes it feel like Lara is learning and becoming better at combat and survival in general, adds to the believability of the character as well as her progression and growth in regards to the narrative. Seeing Lara develop and grow from just a competent fighter to one that can take out whole squads of bad guys quickly, silently and effectively feels very rewarding (and badass). Crystal Dynamics have managed to successfully blend combat and level design resulting in enemy encounters that feel like a puzzle. Lara can even the odds by using the environment and objects strew across the level to her advantage, the game rewards and encourages experimentation, this made each encounter feel fresh and dare I say it unique.

[pullquote]Seeing Lara develop and grow from just a competent fighter to one that can take out whole squads of bad guys quickly, silently and effectively feels very rewarding…[/pullquote]

It seems Crystal Dynamics have been listening to fan complaints as the first game, although lauded as a great Tomb Raider game, seemed to sorely lack any actual tomb raiding. RotTR: 20 Year Celebration have increased the number of tombs to raid significantly. Not only are these optional tombs filled with all kinds of environmental puzzles to solve, they actually contain loads of hidden secrets and plenty of rewards just waiting to be discovered. Several of the game’s areas are open hub zones filled with crafting materials, side missions, and of course the above mentioned secret areas and tombs. It’s quite easy for players to get lost in these welcome distractions. I did find that hunting for raw materials could become tedious at times, causing me to press the same button over-and-over as I collected branches, mushrooms and rabbit skins. Although Rise Of The Tomb Raider: 20 Year Celebration isn’t as good looking as say Uncharted 4, it’s still a gorgeous looking game. Levels are filled with ‘wow’ moments that left me staring at some beautiful and breathtaking vistas. It’s easy to see that Crystal Dynamics has an eye for detail as each area, tomb and building are lovingly crafted with attention to detail, from dust settling in a centuries old tomb to snow falling on a long deserted Soviet base. This attention to detail is even evident on our heroine, as each bruise and scratch she picks up along her journey is clearly visible, emphasizing once again that tomb raiding isn’t as easy as it looks. The animations are exceptional, and each movement, fall, and stumble look and feels real and believable.

Rise Of The Tomb Raider: 20 Year Celebration does come with some welcomed extras, such as all the previously released DLC (Baba Yaga: Temple of the witch and Cold Darkness Awakened) and, of course, an Enhanced endurance mode, a new story chapter, called Blood Ties, and Lara’s Nightmare, a fun zombie romp, as no self-respecting game would not include a zombie themed adventure of some sort nowadays.

[pullquote]The animations are exceptional, and each movement, fall, and stumble look and feels real and believable.[/pullquote]

Blood Ties sees Lara exploring Croft Manor in search of answers regarding her mother’s fate. Lara needs to search for clues, discover secret objects and hidden areas in order to solve the central mystery. Blood Ties feels a lot more like an old-school adventure game than an action game, which after playing the main story is a welcome change of pace.

Then there is Lara’s Nightmare. It seems all manner of paranormal creatures and monsters have invaded Croft Manor and it’s up to Lara’s to defend her home. Lara needs to dodge and shoot all the while conserving her ammo as she tries to defeat all manner of monstrosities until she faces off against the final boss. It’s a fun and lightweight mode that caters to those who revel in challenges.

Finally, there is the new endurance mode that players can now play in co-op. Lara, and her co-op partner are dropped in the middle of the Siberian wilderness teaming with Trinity soldiers out for blood. With Lara growing colder and hungrier, she (and her co-op partner) needs to, not only survive their heavily armed foes but nature itself. Your only hope of escape is to light a signal fire that signals a rescue helicopter. Playing Rise Of The Tomb Raider: 20 Year Celebration, I realized that the game was something incredibly special. It not only rekindled my memories of the original Tomb Raider games (of which I have many fond ones) but also builds on this foundation with an intriguing story, believable characters (that I found myself caring for) and some amazing graphics. It’s refreshing to play a game that, in an era where style is highly regarded, realizes that substance is just as (if not more) important. Rise Of The Tomb Raider: 20 Year Celebration made me care for Lara and the journey she was on. Each fall, scratch, and wound made me winch in concern for her safety.

Rise Of The Tomb Raider: 20 Year Celebration isn’t just an enjoyable action/adventure game, that harkens back to some of the elements that made the original games so much fun, it’s a game that wants you to care and be emotionally invested in it. In other words, if this sounds remotely intriguing to you, you owe it to yourself to play this game.