It has been a quite year for motor racing game fans with releases such as F1 2016 and the highly acclaimed Forza Horizon 3. Unfortunately, this has left motorcycle racing fans out in the dust, with only a few games to satisfy their need for speed. Now it seems that Ride 2, from developer Milestone, might just be what the mechanic ordered.

[dropcap]W[/dropcap]ith the original Ride not able to live up to racing fans expectation, would Ride 2 be able to learn from its predecessors’ mistakes and become the game motorcycle racing fans deserve? From the get go it is evident that there are mostly minor changes to the original Ride’s recipe; it’s more baby steps rather than one huge leap. That said there are more tracks, more bikes, and loads of customization, which for a racing fan are all welcome additions. Customization is an important part of Ride 2 as the game allows players to up the difficulty as they see fit by fiddling with options such as the amount of off-road aid, turning the automatic gear changes and rewind function on or off, switching between multiple levels of physics and AI, but to name a few. All these options allow players to change their playstyle from assisted arcade racing to more realistic unassisted sim racing. As someone who tends to gravitate more towards arcade racing, due to the fact that I suck at racing games in general, I welcomed the option to tailor-make my experience. Now granted the game does feel a little unforgiving even with the all the assisted options switched on, but I was still able, after a few practice laps (and plenty of falls), to start actually winning a race or two. The AI can be brutal at times and rarely make mistakes, and this on occasions frustrated me, but also forced me to continue upping my game, and upgrading my bike.

While on the subject of races, Ride 2 offers race tracks that are modeled after real-world locations, with some offering slight variations on these. While players will be spending the majority of their playtime taking part in 16-man races, the game does mix it up every once in a while by letting players partake in drag races, time trails, endurance trails, and so on. I found these to be a welcome reprieve from the standard races.

Most racing games are only as good as their game modes, as can be expected Ride 2 offers the standard modes found in most racing games such as Quick modes, which consist of Quick Race, Time Trails and Split Screen, World Tour Events, which functions as the game’s career mode and of course Online Multiplayer.

Most of a player’s time will be spend playing the World Tour Events mode which sees players starting at the bottom and making their way to the top of the ranks by winning races. As can be expected, winning races earns players credits with which they can purchase better bikes or upgrade their current ones, in order to win even more races. As I quickly found out upgrading your bike can become addictive. I was continuously stuck in the ‘just one more race’ mindset as I chased the next upgrade that would make my bike just that little bit better. This slow progression can sometimes feel like a grind, and the game does require you to invest a fair amount time into it. But finally unlocking a new bike or upgrade feels rewarding and makes all the effort worth it. Upgrades come in two flavors, those that affect your bikes performance, such as handling, acceleration and braking, and those that tend to be more cosmetic, which gives players the ability to make their bikes look pretty, unique and making them feel like their own. 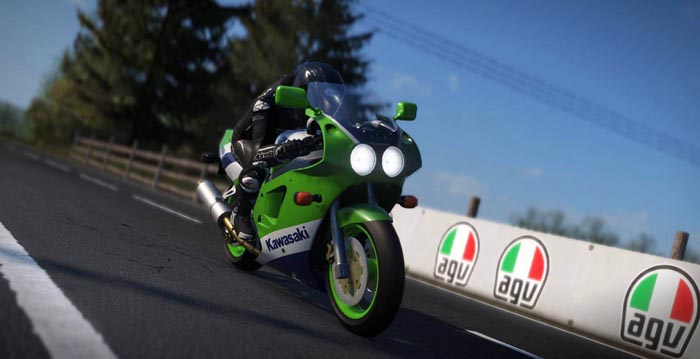 For the most part, Ride 2 delivers in the racing department, visually though the game, in many respects, still looks similar to its predecessor. Although the bikes themselves have been lovingly crafted with loads of attention to detail, each bike even includes a short description of its history, the same can not always be said for the tracks. Now granted it’s difficult to concentrate on your surroundings when you are trying your best not to crash your bike (again),  but there is no ignoring the fact that the tracks lack detail, and the backdrops just don’t look as crisp as you would want them to. Shadows tend to pop in and out of existence, and sometimes don’t load at all. It would have been great if Milestone gave the same attention to the tracks as they did on the bikes. 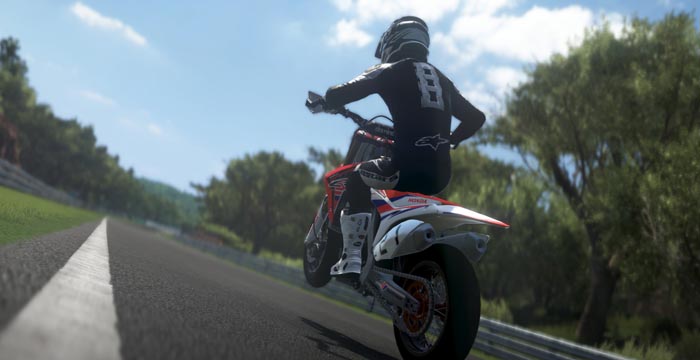 My biggest gripe with the game was the sometimes ridiculously long loading times that I had to sit through. I found it to be really jarring and, it kept me from feeling totally immersed in the game. It’s a shame really as I found myself actually enjoying my time playing Ride 2 and becoming more invested in it than I ever had in the original Ride.

Overall, as someone who doesn’t fair well in simulation racing games, especially not the two-wheeled variety (have I mentioned that I tend to crash a lot?), I actually found myself enjoying steadily building up my bike and clawing my way up through the ranks. The sheer amount and variety, tracks, bikes and customization options on offer should keep the avid racing fan busy for quite a while. Sure, the game won’t win any awards for its looks and it is far from perfect, but I found it to be a solid motorcycle racing game that racing fans should give a try.